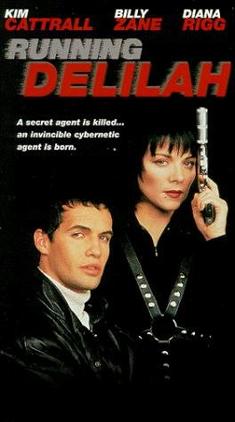 Two raconteurs on this failed TV-show pilot-- director Richard Franklin and writer Ron Koslow-- collaborated with far more success on the pilot episode for the eighties BEAUTY AND THE BEAST. To say that RUNNING DELILAH does not catch the same creative lightning would be an understatement.

The star and her main support-character are played by Kim Cattrall and Billy Zane, both of whom would go on to greater fame elsewhere, so the failure of the pilot was all to the good for them. They're American agents spying on the activities of a suspected weapons dealer, with Delilah (Cattrall) going undercover at the dealer's place of business. Delilah rendezvouses with her handler Paul, and they go back and forth about how she's the only woman in the unit with whom Paul hasn't slept. However, the next night the villain uncovers Delilah's identity and has her killed.

The grief-stricken Paul takes Delilah's body to the laboratory of his agency, where one of the scientists has a special process for making dead people into cyborgs. After a recovery period, Delilah becomes more than a little torqued that she's become mostly machine, with only her head and a shoulder still being human. She rails against her unfair destiny for a while, but eventually Paul and the department head Judith (former "Emma Peel" Diana Rigg) get her to come around and use her powers to take down the man who killed her and his operation.

In comparison to light-hearted productions like SIX MILLION DOLLAR MAN and BIONIC WOMAN, DELILAH makes an effort to show the heroine grappling with the realities of losing most of her human parts-- not least her sexual organs, which she implicitly will never get to use with Paul. (At the end there's a sort of cyber-ability that compensates slightly for lack of the naughty parts, but I have a feeling this would have been glossed over had this become a series.) However, Franklin and Koslow are so preoccupied with showing Delilah's travails that the main conflict gets shoved to one side until the heroine's ready to deal with it. There's very little decent humor to mute the tragedy. except for a moment when Delilah alludes to the breakthrough feminism of Emma, I mean Judith. And most of Delilah's action-scenes fall into the context of her training. I have to admit that BIONIC WOMAN's simpler approach had the advantage of not stinting on the adventure elements.