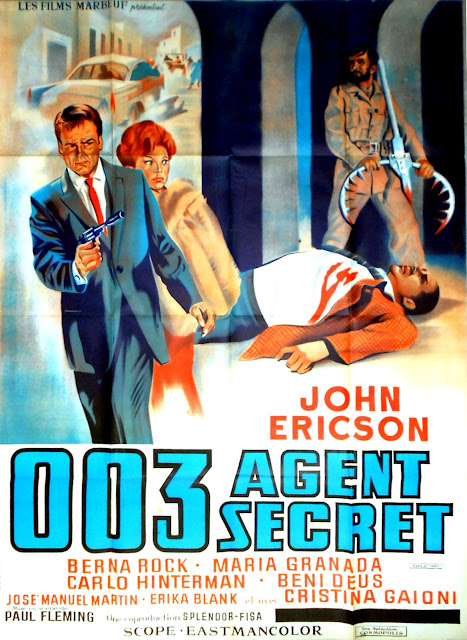 I suppose that if one compares OPERATION ATLANTIS to all the humdrum, by-the-numbers Eurospy flicks, there's something to be said for its attempt to crossbreed the genre with the "lost city" type of film. However, both script and direction seem determined to confuse the viewer about what the hell's going on.

Secret agent George Steele (John Ericson, best known in the U.S. for his co-starring role in the teleseries HONEY WEST) is sent to North Africa to check on some insidious plot involving uranium shipments. With the help of a beautiful female agent, eventually Steele finds himself in a lost city somewhere in the desert. The two of them must done protective suits in order to pass a radioactivity zone, after which they're told that the city is a colony of ancient Atlantis. Certainly the scattered people of the colony-- who are never seen as comprising a big crowd-- dress in antique robes and displays super-scientific weapons, like a device that can encase its target in ice. Steele doesn't ask too many questions, for he's busy trying to decide whether he'll hook up with his current girlfriend or with the hot queen of Atlantis.

To the extent that I could follow the story, I think it's eventually revealed that the city is a hoax perpetrated by the Red Chinese, though there are no Chinese characters anywhere near pseudo-Atlantis. What was the purpose of the hoax? Who knows? Eventually Steele escapes with both of the hot girls while the city is destroyed in cut-rate fashion, and he returns to some modern city to mop up some spies.

Steele is a cipher as a character, displaying none of the charm one expects from the Bond template, and thus it's hard to say why the two women fall for him hard enough that they catfight over him twice. While I don't subscribe to the ideology that male superspies are some sort of "toxic males" because they sleep with many willing women, ATLANTIS does come up with a pretty patriarchal take on things. Toward the end of the film, since Steele can't decide between the two ladies, and because they fight all the time, he anesthetizes them and puts both in separate crates to be shipped back to England by plane. There's a slight pushback against this male chauvinism when one of them escapes en route, but still-- the James Bond of Fleming would have been appalled by such chicanery. This seems to have been director Domenico Paollela's only Eurospy, but he did a fair number of period-peplum films that aren't nearly this brain-fried, particularly these two back-to-back-filmed "Hercules" films.

Posted by Gene Phillips at 1:51 PM
Email ThisBlogThis!Share to TwitterShare to FacebookShare to Pinterest
Labels: combative adventures, the marvelous