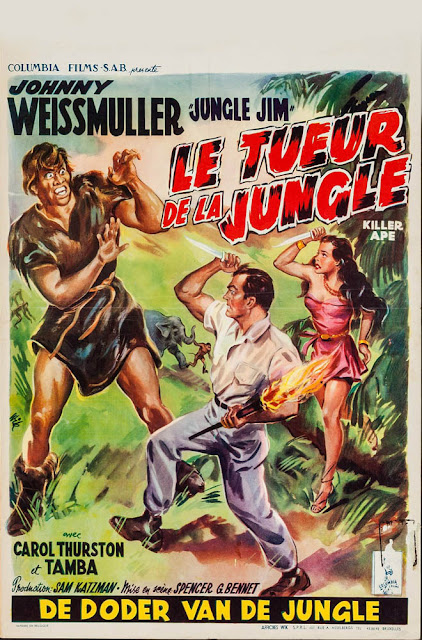 KILLER APE pits Jungle Jim (Johnny Wiessmuller) against three threats in one B-film. One set of opponents are a group of white scientists capturing animals on which they're running experiments, as they seek to perfect a mind-control serum for purposes of eventual world conquest. A second opponent, a lone wolf type, is a towering "man-ape" who goes around interfering with the scientists and killing anyone who gets in his way, including one of the local natives. The natives-- all of whom are dressed like South Sea islanders-- comprise the third threat, because somehow a young girl of the tribe gets the idea that Jungle Jim killed the guy whom the man-ape killed.

To be sure, the natives as a group don't ever go after the beleaguered Jim; most of them it's just feisty Shari (Carol Thurston) who keeps trying to stab Jim with her knife. Writer Carroll Young, notable for three or four cool TARZAN film-scripts, does a nice job of dovetailing Shari's story with that of the colossal man-ape, since after a while the big guy gets interested in the girl and tries to play King Kong a couple of times. Thus Jim has to fight both the evil scientists and the man-ape, who despite his common humanity is treated like no more than a destructive animal. In comparison to some of the other late entries in this series, APE at least boasts a few decent action-sequences amid all the re-worked stock jungle footage.

The most interesting thing about the film is the man-ape's origin, since at one point Jim tells Shari that he suspects that wild apes stole the big fellow when he was a baby, and raised him as one of their own kind. I rather like that Young didn't go the obvious route, that the man-ape was just a leftover caveman, which would have better explained both his unusual size and his primitive clothing. The ape-adoption trope doesn't make much sense, but it's a nice shout-out to the Tarzan mythos, without which Jungle Jim in any medium might never have existed.

Posted by Gene Phillips at 3:04 PM
Email ThisBlogThis!Share to TwitterShare to FacebookShare to Pinterest
Labels: combative adventures, superlative skills (u), the uncanny