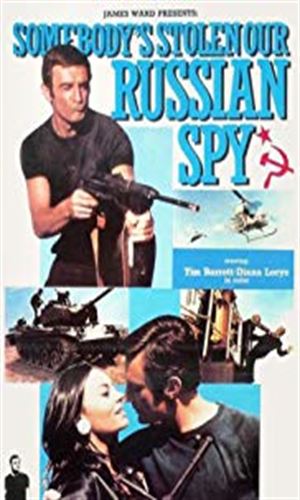 In my review of the first film in this series, THE SECOND BEST SECRET AGENT IN THE WHOLE WIDE WORLD, I went into great detail as to why I felt the arch humor in the movie qualified it for the literary category of the irony. At the time I had not seen either of the two sequels, both of which starred Tom Adams as secret agent Charles Vine, and I still have not seen the second in the series. I can't be sure if that movie maintained the ironic tone of the first one, but to my surprise, SPY does. The only personnel who seems to have been associated with all three flicks, aside from star Adams, is producer James Ward, so maybe the continued tone owes a lot to his co-writing credits on the third film-- all of which was shot in Spain and Portugal by a Spanish director, whereas the first two originated in the UK.

For once, the plot does not revolve around finding some vital super-weapon, but rather, the "Russian spy" of the title (actually, an ambassador). Vine learns that the Russian ambassador was kidnapped as part of a complicated plot designed by the Chinese and the Albanians to pit Russian and British forces against one another. This gambit gives Vine the chance to travel to various exotic locales and become inveigled with various exotic women, with only one or two fights to interrupt things. Eventually Vine is taken prisoner and shipped to a Communist refuge in Albania, where he's held not by Chinese but by their Russian allies. (A breakaway group? Who knows?) The Russians become overly preoccupied with forcing Vine to defect to their side, rather than just killing him, and they use on him both foul means (a torture device that spins him around in place) and fair (a sultry female spy who ends up liberating Vine from imprisonment). Once Vine and the lady spy (Diana Lorys) escape from the installation, they spend an inordinate time dodging the military on their way back to the free world. The pursuit-section doesn't have much to do with the main plot, but for a cheap B-flick the military tanks and trucks look impressive.

There aren't as many odd weapons here as one sees in SECOND BEST, but it's quite evident that the script regards such things through the lens of irony. At the beginning, Vine is summoned by his bosses by the "experiment" of having a female agent shoot him with a curare dart. Later, when Vine is being taken prisoner by the Chinese, the leader-- who claims that "all's well that ends well" is taken from Confucius-- shoots Vine with a similar dart, albeit from a blowgun concealed in a smoking-pipe. The action is just OK but the emphasis on Eurobabes is exemplary, particularly regarding Diana Lorys, who projects both hostility and allure in equal measures-- though she only gets to perform one measly karate chop during the escape section of the flick.

Posted by Gene Phillips at 2:56 PM
Email ThisBlogThis!Share to TwitterShare to FacebookShare to Pinterest
Labels: combative ironies, the uncanny