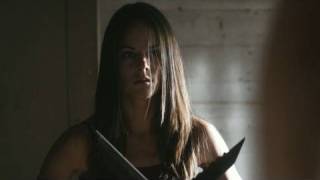 In drawing comparisons to the 1978 I SPIT ON YOUR GRAVE, I don't want to fall into the trap of saying that the 2010 remake was not good because it didn't duplicate Meir Zarchi's original. Indeed, I criticized the 1998 "shot for shot" remake of Hitchcock's PSYCHO for its lack of "fresh ideas." For any remake of a famous story or iteration of a story, the best outcome is when the persons doing the remake show some understanding as to what aspects made the famous version popular, and then to play off those aspects creatively. In many ways the 1955 KISS ME DEADLY is an inversion of the original novel's theme, but the film didn't entirely lose track of the source work's appeal. The changes made by the 2010 GRAVE are entirely comprehensible as far as what the filmmakers were attempting, but their original effects lack resonance, and their execution of Zarchi's ideas is pedestrian.

This GRAVE is a more straightforward melodrama, lacking any of Zarchi's distanced, Olympian view of the narrative. Again, this by itself is not a failing. But other alterations hurt the consistency of the narrative.

The base conflict of the 1978 movie is as follows: when a relatively well-off city woman rents a cabin in the wilds of Connecticut, three less well-off rural goobers decide to rape her, for good measure drawing in the participation of a fourth local with diminished mental capacity. The woman escapes being killed after her ordeal, and then tricks two of the four men into death-traps before killing the other two more overtly. For feminist audience then and now, the most objectionable part of the female's plan is that she cozies up to one of the killers in order to make him completely drop his guard.

In the newer GRAVE, city woman Jennifer Hills (Sarah Butler) once more rents a cabin in the country, and once again three good old boys decide that she's easy pickings, and they draw a mentally retarded fourth guy into their plot. However, in 1978 their action seems fairly spontaneous, the result of the men holding verbal pissing contests with one another, daring each other to assert male dominance over Jennifer. However, this time not only is there very little sense of the city-country conflict, but the bad guys draw a fifth cohort into their shenanigans, the local sheriff. This twist has the presumably unintentional effect of making the rape attack more deliberate, as if the local boys had done this kind of thing with the local law before. Admittedly, verisimilitude is not a main concern in a rape-revenge melodrama, but when its lack causes the viewer to become divorced from the narrative, that's not something one can wink and smile about.

The other major change is that after Jennifer survives her ordeal, she doesn't disappear for a time and then come back to town as if nothing had happened, the better to deceive her attackers. She falls into a river, so that her assailants think she may be dead, and when she comes back, she executes each offender in well-thought-out murder-scenarios. Arguably the methods of 2010 Jennifer are more overtly sadistic than those of 1978 Jennifer, but this strategy has the effect of making the character seem less like an ordinary woman pushed to the brink. Again, for me there's nothing wrong with colorful acts of sadism in a more purely escapist context, as one sees in, say, the ILSA films. Here, though, the most one can say is that the sadistic scenes are well filmed and get across the basic revenge motif.

The performances emphasize a generally down-to-Earth quality rather than shooting for grand melodrama, and this may have been a creative decision based in the desire to make GRAVE somewhat palatable to the last of the third-wave feminists (given that the fourth wave that followed could never embraced this product under any circumstances). I imagine some viewers may even have preferred the 2010 iteration to that of 1978, but I definitely am not one of them.

Posted by Gene Phillips at 4:52 PM
Email ThisBlogThis!Share to TwitterShare to FacebookShare to Pinterest
Labels: bizarre crimes and crimefighting (n), the naturalistic