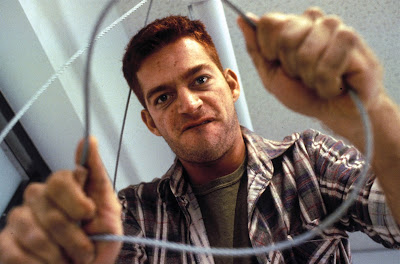 Gill never inspires the "dread" that I look for in uncanny psychos, even of the mundane sort that appears in EYES OF A STRANGER. Everything about Gill, as well as his functional double Brummer, is easily explained by Freud's emphasis upon "physiological concepts," as Jung termed them.-- my review of NO WAY TO TREAT A LADY.

I didn't remember anything about COPYCAT since watching it in the nineties, except that it was a decent thriller. This time I watched to see which phenomenality, the naturalistic or the uncanny, the titular serial killer fell into. My quote above pretty much sums up the reason why the Copycat lacks the "dreadful" nature of the uncanny psycho. The only new wrinkle about the Copycat is that he doesn't just imitate a particular previous serial killer, he imitates a sequence of such killers from a particular citation. The Copycat has little personality of his own, having drawn much of his inspiration from an earlier murderer who was caught and imprisoned after he tried to slay the movie's real star, Helen Hudson (Sigourney Weaver).

The viewer also doesn't ever know much about Hudson's background: her life essentially begins as an adult criminal psychologist. One of her violent patients escaped prison and tried to kill her by hanging her in a restroom, and though Hudson survives to write best-selling books about psycho-killers, she was so traumatized by the incident that she became agoraphobic, barely able to stir from her San Francisco apartment.

When a new serial killer with no clear pattern starts racking up bodies, though, Hudson can't resist calling the police to demand that they do something. Homicide cop Monahan (Holly Hunter) tracks Hudson down and asks her to consult on the case. Despite being dragged into the investigation kicking and screaming, it's clear Hudson wants to be involved-- at least partly because one of the killer's patterns suggests that of the man who tried to hang Hudson, though that psycho is still in prison.

The title more or less broadcasts the nature of the serial murderer, which may be the reason that the script doesn't spend much time on his background either, the better to play up Hudson's tics and emotional tantrums. Weaver is good in a role with possible links to the Jimmy Stewart cop in Hitchcock's VERTIGO, but there's not much substance here beyond the ways and means of serial killers. An opening sequence of Hudson lecturing a college class and making a comment about how most killers are white middle aged men isn't meant to be especially political, but from today's politicized standpoint it sounds like a condemnation from some benighted Progressive.