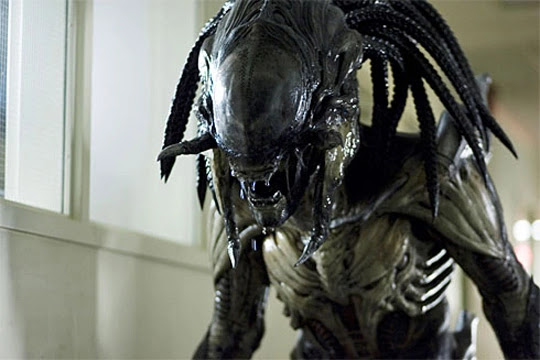 For once, the largely meaningless subtitle of a high-profile franchise film received meaning after the movie came out, for AVPR did indeed provide a "requiem" for this short crossover series by killing it dead. The previous film had only a few entertaining sequences, and its decision to bring the two ETs together on modern-day Earth was a mistake that had even worse results for the sequel. But at least it told its simple story with formulaic efficiency.

While there have been special-effects technicians who went on to other creative endeavors, the Brothers Sprouse may have been a textbook example of the almost forgotten Peter Principle, having been advanced to a level far beyond their capacity. I've seen various FX-people who made competent but unexceptional film directors, but the Sprouses couldn't tell a story to save their lives.

For instance, it's more than a little important that the Predators' experiments with the Aliens lead to the creation of a combination of their species, a creature termed "the Predalien" by the film's marketing. This idea of the Aliens as genetically metamorphic was an idea thrown out by ALIEN RESURRECTION, and it was a very bad one in that it contradicts the biological conceit of the original ALIEN film, in which the ET is laying its progeny in its victims purely as a food-source, not as a gene-splicing endeavor. But the Sprouses couldn't make even a bad idea clear with their fuzzy direction and their overdependence on quick-cuts.

I never saw AVPR on a large screen, so maybe a viewer could make more sense of events if they were on theatrically sized. But on DVD I could hardly see what was happening in the night-time scenes, of which there were far too many. I suspect that the prevalence of shadowy scenes may have something to do with someone's decision to shoot the film in Vancouver, for in the commentary the Sprouses complained about the recurrent raininess of their venue. But other filmmakers have managed to make competent films under arduous circumstances. The Sprouses aren't among them.

The script is equally at fault. At least in the previous film, a few characters had some ideas about what the rival races of extraterrestrials were doing on Earth. Here, the Predalien gets loose in rural Colorado, and is pursued by a noble Predator-- but the workaday humans have no idea what they're dealing with. In addition, none of them, least of all the ex-con viewpoint character, are any more interesting than the ciphers of a SYFY channel critter-film.

Lacking good characters or effects that one can actually see, AVPR is a total washout.