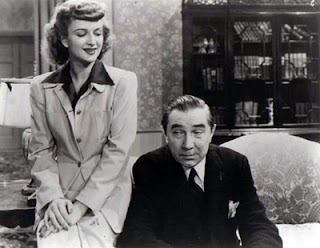 BLACK DRAGONS, a WWII film directed by William Nigh (who had previously directed star Bela Lugosi in 1935's MYSTERIOUS MR. WONG) is a so-so blend of wartime themes with the horror-movie tropes characteristic of earlier Lugosi films.  The film's main interest for me, however, is how it illustrates a particular subset of my "freakish flesh" trope.  Nine out of ten times, anything I label with this trope connotes a narrative in which someone has some natural physical characteristic culturally deemed to be "freakish" in some way.  Here the physical characteristic is one created by advanced surgery.

DRAGONS' title plays loosely off wartime America's knowledge of the super-patriotic Japanese group known as the Black Dragon Society.  However, the crux of the script asks the question: what if the Japanese could become fifth-columnists working to undermine America?  Germans could do so with impunity, but one would expect the Asian features of the Japanese to prevent them from "blending in."

Surgery proves the solution, though this isn't revealed until late in the film.  For half the film one only knows that a mysterious killer, known as Monsieur Colomb (Lugosi), is killing off prominent political or social figures in Washington D.C.  Agent Dick Martin (LONE RANGER immortal Clayton Moore) centers his investigation of the killings upon Colomb, the guest of a local luminary named Doctor Saunders, but the G-Man cannot initially prove anything. Saunders' niece Alice (Joan Barclay) also occupies the residence and seems determined to vamp the mysterious Colomb, despite the fact that he's about thirty years her senior.

Eventually the complicated truth comes out.  Colomb is actually a Nazi surgeon named Melcher.  He travelled to Japan in order to perform operations that transformed six members of the Black Dragon Society into identical doubles for the prominent citizens.  Once the citzens were replaced-- the film is murky as to how this was done-- the camoflagued spies took over their identities in order to somehow destroy America's war effort.

The Society's leaders, however, made a mistake, for they decided to imprison and execute Melcher so that he could never reveal the secret.  Melcher escaped execution and voyaged to America, no longer interested in serving the war effort and seeking only revenge upon the "monkeys" who betrayed him.  Thus it comes out that although Melcher/Colomb is evil, he's been working to the benefit of the Allies by killing Japanese spies.

Heroes and villains alike receive only the flattest of characterizations, and the American/Japanese conflict receives no insight beyond the usual propangandistic tropes.  Only Alice seems to be a little
unusual in her pursuit of Colomb, but it eventually comes out that she too is an agent of some intelligence unit, so that she was only pretending affection for him.  The only moderately interesting dialogue appears between Moore and Barclay as he tries to figure out why she's interested in the old geezer Colomb.

As a last horrific touch, Melcher doesn't simply kill his final spy-victim, but mutilates the man's face so that he looks a little on the ghastly side (though not too ghastly).

Just to cite how an entirely naturalistic film approached the same trope, I point to 1945's FIRST YANK INTO TOKYO.  This film reverses the racial masquerade, in that an American officer with the very vanilla name of "Major Steve Ross" (Tom Neal) accepts a unique undertaking.  In order to find a man being held in a Japanese prison camp, Ross allows the alteration of his features and skin-color so that he will appear to be a native of Nippon.  In this guise he successfully infiltrates the Japanese army, which gives him every opportunity to see the unregenerate scumminess of the people, both at home and at war.  Despite the suspicions of one Japanese officer, Ross succeeds in making it into the prison, gathering vital information from the internee, and transmitting it to his people. In addition, Ross just happens to stumble across his former fiancee working in the camp as a nurse.  She thinks Ross is dead, and when she sees him altered into a man who looks like her people's enemy, she comes close to wishing him dead.  Ross gets her clear of Japan as well, and stays behind, pledging to join the Koreans in their battle-- implying that even if his surgery was reversed, he's been in some sense polluted by even wearing the image of a hated Asian.
Posted by Gene Phillips at 3:45 PM
Email ThisBlogThis!Share to TwitterShare to FacebookShare to Pinterest
Labels: freakish flesh (n), freakish flesh (u), the naturalistic, the uncanny