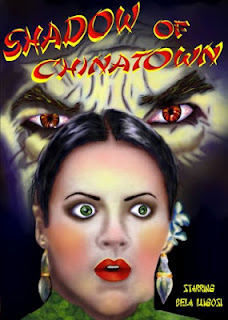 
Writer-director Robert F. Hill had the chance to work on a number of adventure-films adapted from other media, starring such heroes as Tarzan, Flash Gordon, and the somewhat less famous Blake of Scotland Yard (though Hill managed to helm both the silent 1927 Blake-serial as well as the sound Blake-serial of 1937!)  But his one encounter with actor Bela Lugosi-- whose flamboyance often gave birth to mythic film-icons-- didn't lead to anything more than a road-company version of Fu Manchu.

It's a shame, because SHADOW OF CHINATOWN has a little more potential than most sound serials that touch on Asian themes.  One positive aspect is that a fair number of real Chinese actors were used for the Chinatown scenes.  The most-used Asian character is Willy Fu, manservant to the film's hero, but Willy is consistently portrayed as reasonably resourceful and likeable.

Further, the film focuses on the disenfranchisement of Chinese merchants on the American West Coast, at the hands of some unnamed European company.  The company orders local Eurasian "shady lady" Sonya Rokoff-- described as half Chinese, half Russian-- to find some way to terrorize the Chinese into fleeing the equally-unnamed West Coast city.  To this end Rokoff (Luana Walter) enlists mad scientist Victor Poten (Lugosi), also a Eurasian, to begin the terror campaign.

Unfortunately, at some earlier point in his life Poten was so badly treated by both Caucasians and Asians that he decides to elevate the campaign into a general war on both.  Whereas some versions of Fu Manchu emphasize the battle of "the East" to subjugate "the West," Poten is the victim of bigotry from both of the ethnicities making up his background.

Granting that an adventure-serial would never have exploited the dramatic potential of this setup, as one might see to some extent in Capra's 1933 BITTER TEA OF GENERAL YEN, Poten's conflict could still have been used for some very exciting adventure-scenarios.  The problem seems to be that SHADOW, a production of Victory Pictures, was supervised by Sam Katzman, whose notoriety for extreme cost-cutting would later lead to such cinematic absurdities as THE GIANT CLAW.  Thus at no time does the mad doctor unveil any apocalyptic schemes capable of eradicating both hated ethnicities.  His fearsome gimmicks include:

--a stationary "automaton" that can grab victims who get close enough, and then drop said victims into a pit
--the usual "hydraulic walls" seen in countless serials
--a poison needle inserted in a telephone's earpiece
--the usual poisonous gas
-- and, most comically, a "sinister ray" that is no more than a goldfish-bowl set so that it will concentrate the rays of the sun and burn a hole through a victim's head.

One suspects that at no time did Fu Manchu watch the serial and feel envious.

To be sure, Poten has one other weapon: in keeping with earlier Lugosi characters, Poten can exert hypnotic influence upon some if not all victims, which is certainly handier than the light-focusing fishbowl.

Once Poten makes his first strike against Chinese merchants, he largely forgets about them and focuses on destroying the people trying to strike back against him: the police, Rokoff (who turns on Poten when he goes bat-nutty), and local writer on Things Asian Martin Andrews (Bruce  Bennett, fresh from playing a serial-version of Tarzan). Andrews gets drafted into villain-hunting by spunky lady reporter Joan (Joan Barclay), who wants Andrews to help her get a great story on Poten.  They fall in love, if one can call it that, during which Andrews constantly berates Joan and finally does succeed in getting her to quit journalism and marry him.  If the film has a better-than-average attitude toward Chinese Asians, it goes out of its way to deride then-current feminine liberation.

The action is stodgy at best: strapping hero Bennett gets into a few fights but none are well-choreographed, though there's one nice cliffhanger-moment where it looks as if Poten succeeds in hanging the hero.  None of the characters are overly sympathetic, and the serial often burns up time having Poten trying to kill or utilize defecting allies like Rokoff and one of Poten's own henchmen.

All in all, aside from the generally friendly portrait of Asians (in the last chapter Poten flees the law and bypasses a Chinese lion-dance ceremony), this is a very low-energy adventure serial.  Its only other point of interest is that it's one of those in which the villain is more the narrative center than the hero.

Posted by Gene Phillips at 4:42 PM
Email ThisBlogThis!Share to TwitterShare to FacebookShare to Pinterest
Labels: combative adventures, diabolical devices (u), enthralling hypnotism and illusionism (u), the uncanny