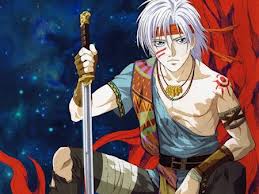 
This fairly sophiscated SF-adventure series-- whose name translates to "Planet of the Beast King"-- first appeared as 11 episodes on Japanese television in 2006.  The episodes adapted a *shojo* manga of the same name that, according to Wikipedia, ran from 1993 to 2003.  I haven't seen an English translation of the manga, so I don't know how closely the anime series follows the original manga.


I will say that, in contrast to some of the more vacuous SF-fare I've seen from Japan in recent years, the JYU-OH-SEI anime includes some strong dramatic situations in addition to its dominant action-adventure tropes.  While it's not precisely a match for the best adventure-dramas from the days of John W, Campbell Jr.'s ASTOUNDING, I do see some parallels in the way the young hero slowly progresses from the status of naive outsider to feudal lord to a man in conflict with a higher technological civilization.


The hero begins as a member of that higher technological civilization.  Eleven-year-old Thor Klein and his twin brother Rai are living a peaceful existence with their parents on Juno, one of several colonized worlds in the far-future Balkan star system.  The assassination of their parents ends their childhood, following which the mysterious assassins dump the two children on a penal planet named Chimaera.  In a clear evocation of the mythic trope of "stronger brother/weaker brother," Rai proves unequal to the rough life of Chimaera and perishes, but Thor has no time to mourn.  He's captured by a tribal society, where he meets two of the individuals who will rule over his life in different ways.  The first is Tiz, a perky young girl who wants him to mate with her (as Chimaera has more males than females, women have absolute right to demand mating-rights with anyone).  Amusingly enough, the second is Third-- "third" being his tribal title, though his true name remains a mystery for the majority of the series.  Third will prove to be something of a manipulator, for in time he maneuvers Thor into fighting the tribe's headman in an arena.  When Thor kills the old headman, he ascends to leadership.

Interestingly, after the first half-dozen episodes, the storyline jumps ahead four years, with Thor still the chieftain of his tribe and attempting a King Arthur-like feat of gaining sovereignty over other tribes on Chimaera.  To the consternation of Tiz-- who loves Thor but who Thor only regards as a "sister"-- Thor takes a lover named Karin, the discarded paramour of rival tribe-leader Zagi, who was among those who helped Thor in his early days on Chimaera.  Thor has aspirations of becoming the "Beast King," which will earn him the privilege of being able to leave the penal planet to return to the place of his birth.  However, Karin is killed by a conspirator, and Thor is forced to ferret out the traitor even as he begins to learn that the entire occasion of his advent to Chimaera is part of a vast scientific experiment by the other Balkan colony planets.  He and his allies must fight both the technological perils of the experimenters while trying to keep Chimaeara from falling into chaos.

The storyline here, though essentially solid, often seems rushed, so it may be that the manga series had the luxury of unwinding many of its plot-developments in more leisurely fashion, whereas the limited teleseries had to cram in as much as possible.  Nevertheless, JYU-OH-SEI does a good job of putting across the cosmological motif of building Chimaera's distinct ecology, the sociological motif of the tribal customs and the way those customs are manipulated by outsiders, and the psychological motif of Thor's attempt to throw his own immaturity and become a fit ruler for the society he inherits.


In addition to giving the hero the name of a heroic Norse god, there's also an "Odin" and a "Loki" in the story, though the authors don't seem to have any particular purpose in using the Norse names.  The only myth-context here is reversed, with this Odin being hostile to Thor while Loki turns out to be Thor's benefactor.
Posted by Gene Phillips at 3:02 PM
Email ThisBlogThis!Share to TwitterShare to FacebookShare to Pinterest
Labels: combative adventures, the marvelous