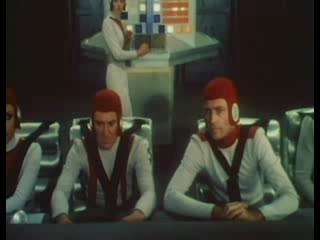 Looking at the costumes of these two Italian space-operas-- which share many of the same sets, costumes, and director Alfredo Brescia-- I'm impressed as to how often they resemble the general look of the BUCK ROGERS comic strip.  And by "look," I mean the strip in its heyday back in the 1930s and 1940s.  Much of Italian space opera shares the look and attitude of the famous space-adventure strip, though one would have to be better-versed than I in the history of Italian cinema to know why its filmmakers should have such near-archetypal memories of the ROGERS strip, rather than following models like FLASH GORDON, FORBIDDEN PLANET, or what have you.

COSMOS WAR OF THE PLANETS is simple, straightforward space-opera with one consistent thematic thread: machines are bad.  The main star of the movie, Captain Mike Hamilton of a star-vessel, constantly tells anyone who will listen (even while bedding his girlfriend) about how invasive machines are in their daily lives.

So when his vessel answers a distress call from an "unstable planet," what entity is controlling a race of indigenous green people.  Why-- it's a big evil computer, who's lured the ship there in order to enlist its crew to tend its circuits.  Hamilton and company destroy the computer.

The most one can say of COSMOS is that it was probably conceived prior to the success of STAR WARS, so there's few Lucas-isms here.  In contrast, the insanely bad STAR ODYSSEY has all the requisite borrowings-- cute robots, laser-looking swords, and a daring Harrison Ford-like hero.  But where COSMOS at least moves along well, ODYSSEY bogs down from the first and never picks up.

Avoid except for "so bad it's good" parties. 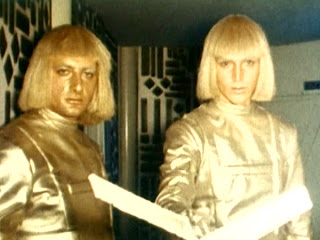 ADDENDA: I should be a little more specific about the way in which STAR ODYSSEY "bogs down."  I don't mean that it's dull in the sense that nothing happens, but that it's dull because stuff is happening all the time, but none of it adds up to anything.  One hears about some film-shoots where the writers are literally making up the script as they go along.  This tendency may be aggravated in many special-effects films-- even those with little money behind them-- because their makers are always trying to whip up visual scenes that may "grab" the audience.  Brescia and his screenwriters have clearly seen STAR WARS, but they don't seem to have apprehended that the strength of its narrative drive.  ODYSSEY feels more like a knockabout comedy, in which one goofy stunt happens after another.  Appropriately, the only characters who seemed consistent as characters-- even though they were still not very interesting-- were two comic robots.  In a very *tiny* show of originality, Brescia's robots aren't *exact* clones of R2D2 and C3PO.  Instead they're a robot husband and wife who constantly carp at one another throughout the movie.  Again, they weren't good-- but I can remember them a little better than the copies of Han Solo, Princess Leia and Darth Vader.
Posted by Gene Phillips at 3:49 PM
Email ThisBlogThis!Share to TwitterShare to FacebookShare to Pinterest
Labels: combative adventures, the marvelous