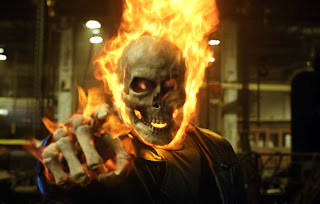 
Like most comics-fans I can grind my gears about any number of "incorrect" cinematic portraits of comic-book characters, even knowing that the comic books themselves often differ widely in this or that creator's depiction of a given character's nature.

Marvel Comics' Ghost Rider, however, has one advantage over more well traveled figures like Spider-Man or even Daredevil.  I confess I'm not as familiar with versions of the character seen during the 1990s and afterward as I am with earlier renditions. Nevertheless, nothing I've seen of those later versions dissuades me that Ghost Rider is harder to make "incorrect" because he's such a simple type of monster-hero.  From the early version by Gary Friedrich and Mike Ploog to the chain-wielding "spirit of vengeance," the Rider is pretty simple: he encounters evil and kicks its ass.  The character's experiences with magic, mysticism, Heaven and Hell are rarely if ever developed in terms of their symbolic complexity-- which may be a great part of the Ghost Rider's continuing appeal; that lack of canonical story-baggage that often weighs down characters like Spider-Man.

This may be why the 2007 GHOST RIDER, written/directed by Mark (DAREDEVIL) Steven Johnson, was reasonably profitable despite negative critical reviews.  Though it drew on some of the hero's comics-mythology of the 1990s, Johnson's film remained basically true to the essence of the Friedrich-Ploog original, detailing the struggles of Johnny Blaze (Nicholas Cage), a man who sells himself to the Satan-like Mephisto for a favor.  Mephisto later summons Blaze and transforms into the fiery-headed Ghost Rider.  Blaze is offered the chance to win back his soul if he will defeat a group of demons who have rebelled against Mephisto's authority-- one of whom is Mephisto's own son Blackheart.

Most of the plot is consumed by the Rider's running battles with the demons, though a subplot involves an earlier "Ghost Rider" from the Old West, who was also Mephisto's pawn but who won free by defying the demon-lord.  (For those not in the know, this was a continuity "shout-out" to the fact that Marvel had published a Western "Ghost Rider" prior to the skull-headed protagonist.)  At the climax, thanks to the help of the Western Rider and of his faithful (but not very interesting) girlfriend, this Ghost Rider defeats the rebel demons but also deprives Mephisto of a prize consisting of a contract for a thousand souls. The film ends with Johnny Blaze swearing to use his demonic powers to bedevil the Devil himself.

Johnson's film isn't a bad rendition of the comic-book original, but the hero's running battles with assorted petty demons reduce it to a rather pedestrian collection of supernatural fight-scenes.  Its best moment consists of the two Riders teaming up for the common good, to the accompaniment of the pleasurable (though predictable) tune "Ghost Riders in the Sky."  All in all, just an average blending of the horror/superhero worlds.

Prior to screening the sequel GHOST RIDER: SPIRIT OF VENGEANCE, I'd heard nothing but thumbs-down reviews for it.  Since I found it an improvement over the original film, I'm inclined to wonder if SPIRIT was the target of fannish "vengeance" from audiences who didn't like Nicholas Cage (reprising the central role), or story-scribe David S. Goyer (who *has* written many bad works), or just the idea of a Ghost Rider sequel to begin with.

As I said above, most GHOST RIDER comics have kept their metaphysical dealings pretty simple.  In contrast, Goyer's story (transformed into a screenplay by Goyer and two others) does yeoman duty to bring some of the resonance of real Christian mythology into the comic book's Christian-derived mythos.  At the same time co-directors Mark Neveldine and Brian Taylor deliver almost as much kickass action for SPIRIT as they did with their previous (and justly celebrated) collaborations, the two CRANK films starring Jason Statham.

In contrast to the rather ponderous plot of Johnson's adaptation, the plot of SPIRIT sticks with one basic, visceral idea: Mephisto sending his goons, both mortal and demonic, to bring him Danny (Fergus Riordan), the thirteen-year old boy whom the Devil fathered on a living woman named Nadya (Violante Placido). At a certain time and place, Mephisto-- who walks on Earth in a mortal body named "Roarke"-- plans to transfer his essence into his son.  This will destroy the boy's essence but will also make it possible for Mephisto to extend his power in the mortal world to an unprecedented degree.  Nadya, a gun-toting babe in the Linda Hamilton tradition, opposes this plan, as does Moreau, a gun-toting Christian warrior.  Moreau, having somehow learned of Johnny Blaze's curse, seeks out the bike-rider and offers him the chance to be purged of his curse if he helps foil the devil's scheme.


Goyer's characterization of the Blaze-Rider relationship is more nuanced than Johnson's.  Following the 2007 film, Johnny Blaze has found it hard to control the Rider's power.  In particular, he warns Moreau (and later Nadya) that the Rider is so ruthless that he'll punish anyone, not just those most deserving.  This warning bears fruit later; following the Ghost Rider's second conflict with a batch of Mephisto's hired thugs, the Rider also turns on the objects of his rescue.  Only the fact that Danny is a conduit for Mephisto's Satanic power enables the boy to subdue the demon inside Johnny Blaze.

Mephisto ups the ante by transforming one of his thugs into Blackout (a character based on, but not directly linked to, a villain from the comics-mythology).  The demonized Blackout, possessed of the power to cause things to decay, goes after Blaze and his cohorts, which belatedly includes Moreau.

Moreau, thinking that he's got the mother and child stashed away securely, comes through on his promise to rid Johnny Blaze of his curse, after giving him a little history lesson about the demon, who was once an angel who was captured and corrupted by Hell.  The script thus creates a parallel between Blaze and the demon that possesses him, though it doesn't come to much given that the Rider doesn't have much of a personality beyond "crush kill destroy."  The curse is lifted, but one doesn't need a telegraph receiver to get the message that Blackout will once more capture Danny and that Blaze will need the Rider's power just when he's lost it.

Still, despite this predictable development, Goyer does come up with a fairly original way to re-curse the hero so that he can kick demon-butt, save the boy and restore the hero's status quo as cursed crusader. Goyer's story may have aroused fannish ire simply because it was a simple formula, but I'd argue that it was a better rendition of formula than the Johnson film-- and also better than an awful lot of GHOST RIDER comics.  Its virtues may be minor ones-- as when Danny asks Blaze what would happen if he tried to pee while he was on fire-- but they are virtues nonetheless.

Posted by Gene Phillips at 3:15 PM
Email ThisBlogThis!Share to TwitterShare to FacebookShare to Pinterest
Labels: combative adventures, the marvelous