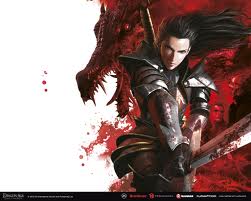 
DRAGON AGE: DAWN OF THE SEEKER is a very simple RPG-fantasy produced in tandem by Bioware and Funimation.  For the DVD I viewed, the makers made the unusual decision to separate the English-language version and the Japanese-language version onto separate discs.

The short version: no wheels are reinvented here, but at least the wheels turn smoothly enough.

Notwithstanding the name, the dragons don't have much to do here.  Perhaps they play a bigger role in the DRAGON AGE games, but here they're principally the pawns caught between the forces of good and evil.  A prologue gives an efficient if not very enthralling outline of those forces: the good guys are the Templars, knights dedicated to a churchlike body, "the Chantry," whose main purpose is to reign in the power of magicians. There are good magicians around, called "Circle Magi," but the Templars must periodically chastise the unsubtly-named "Blood Magi," presumably so named due to a penchant for blood sacrifice.

Happily, there is some philosophical wiggle-room between these portraits of absolute good and absolute evil, for the prologue does admit that the Templars can become "corrupt" or obsessed with their pursuit of justice.  Cassandra Pentaghast, one of AGE's two main characters, is an example of the latter, being that she is an elite Templar called a "Seeker" and that she hates all Magi because a Blood Magus killed her brother.  AGE's heroine-- the only female knight in the story-- is based on a supporting character from the DRAGON AGE 2 game, upgraded here to star-status. However, she's not given a tremendously articulated backstory beyond the death of her brother.

Cassandra is a consummate badass fighter, but not a very likeable character.  More than any other character she suffers from Bioware's stiff CG-animation: at times her brow-- usually furrowed because she's angry almost all the time-- looks like a shelf capable of holding a pot or two.

Cassandra and her father-figure Byron break up a Blood Mage ritual and rescue a lone elf-girl.  (Elf-haters may be pleased that there's only one elf in the story.)  Byron tries to get the elf-girl into the helping hands of a Circle Mage name of Galyan, but the operation is betrayed and Byron is killed.  Cassandra, despite her dislike of mages, must join forces with the rather bland Galyan to learn the nature of a conspiracy between a Blood Mage and a Chantry traitor, which uses the dragons as "hit-men" to eliminate as many Chantry bigwigs as possible.

The conflict of warriors and magicians has some potential, but AGE never takes the conflict beyond the obvious, nor articulates the origins of the conflict.  There's a smidgen of romantic interplay between Cassandra and Galyan, but don't expect IT HAPPENED ONE DRAGON-NIGHT here. The emphasis is principally on action, and if one can get used to the limited CG-animation, a few scenes of Cassandra smashing and slashing are moderately enjoyable.  I have seen more than a few RPG adaptations that didn't even manage that.
Posted by Gene Phillips at 3:31 PM
Email ThisBlogThis!Share to TwitterShare to FacebookShare to Pinterest
Labels: combative adventures, the marvelous