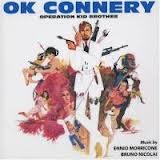 Italian superspy movies are such lightweight confections that you wouldn't think anything could ruin one.  And some would say that the more absurd they are, the better. Those viewers would probably welcome the central gimmick of OPERATION KID BROTHER: to cast Neil Connery, sometime actor and the real-life brother of Sean Connery, as the younger brother of an unnamed superspy. This Neil, a doctor by profession, must "fill in" for his never-seen sibling and save the world.

I'm not such a purist that I couldn't appreciate this idea if it had been pursued as baggy-pants comedy, as seen in the 1967 CASINO ROYALE.  However, though some references call BROTHER a "spoof," director Alberto deMartino and his scripters put forth what looks like (at least in the Americanized version) as a "straight" superspy entry, albeit with a higher budget than most such works.  The character of "Doctor Neil Connery" (the character has the same name as the actor) is given some absurd traits-- he can hypnotize people by dramatically pointing at them, a la Mandrake-- but he isn't played for laughs.  The producers went to the trouble and expense of lining up several actors familiar from the official Bond series-- Lois Maxwell, Bernard Lee, Adolfo Celi, Daniela Bianchi-- and even brought in a doppelganger for the Lotte Lenya character of FROM RUSSIA WITH LOVE.  But none of them are "spoofing" their roles in the film, so I have to deem BROTHER an adventure-tale with a great deal of comic potential in it.

BROTHER is also a great-looking film for all its derivative qualities.  Whereas the British Bond films never quite lose their connection to base reality, most Italian superspy flicks revel in the candyland aspects of the subgenre.  One of the unidentified commentators in Phil Hardy's ENCYCLOPEDIA OF SCIENCE FICTION-- a generally worthless hodgepodge-- made a telling remark about another Italian superspy-film, remarking on the "operatic technology" in it.  Everything in BROTHER has this operatic quality, from Adolfo Celi's insidious plot to unleash radioactive rugs on the free world to "Lotte Lenya" garbed as a nun and killing people with a knife that shoots its blade at its targets.

There's no depth to any of this, but I did think it interesting that Celi (famed as the central villain of THUNDERBALL) doesn't start out as the main badguy, but rather he has to kill his superiors to get to the top. Neil Connery replaces his "brother," who later testifies (in absentia) to his younger brother's superiority, with much less muss and fuss. 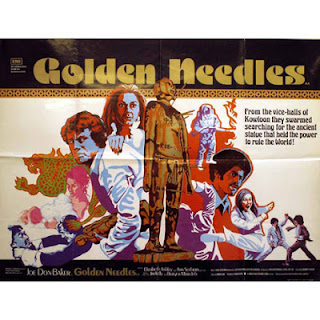 I won't say much about GOLDEN NEEDLES, one of the many failed attempts of director Robert Clouse to duplicate his success with the chopsocky classic ENTER THE DRAGON.  NEEDLES is really just one running brawl after another, as troubleshooter Joe Don Baker runs around Hong Kong with various allies (including kung fu star Jim Kelly) trying to find a golden statue.

The man-shaped statue is said to contain a quantity of acupuncture needles which can supposedly be used either to soup up a man's sexual prowess or to kill him in horrible agony.  Given that neither effect would have been expensive to film, I'm puzzled that the needles are never used.  Since they are not, their effects can't be regarded as anything more than spurious legends, making this an entirely naturalistic adventure-opus.

Perhaps needless to say, Baker not only fights his opponents in the same meat-and-potatoes way he did in every other film, he never has to face any kung-fu fighters worthy of the name. Kelly and actress Frances Fong get some nice if very short battles, while Elizabeth Ashley and Burgess Meredith class up the joint somewhat.  There's also one weird scene in which some bad guys clad in fireproof suits invade a house and start burning everyone with flamethrowers.  It seems to have nothing to do with the plot as such, and it's almost weird enough by itself to bump this film into the "uncanny" category.  But-- only "almost."