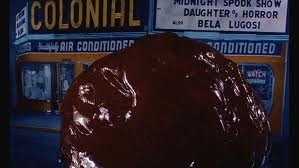 It may be heresy in some quarters to say this, but I think the BLOB remake is a much better film than the original from '58.

Of course the original still merits supreme bragging rights in the department of ideas.  Producer Jack H. Harris credits his colleague Irvine Millgate with the idea of a "molten meteor" that fell to Earth and started absorbing any living thing it encountered.  In retrospect it's odd that Millgate and Harris conceived of the creature as a "mineral monster" (Harris' term), for the only objects with which the Blob bears close comparison-- sponges, unicellular creatures, or even the human stomach-- are organic in nature.  The only way in which the Blob seems mineral-like is that at many points it still resembles the meteor on which it descends.

That said, director Irwin Yeaworth was still learning his trade-- on one DVD commentary, Harris asserts that Yeaworth's main motive for helming Hollywood films was to hone his talents for his church-related projects.  THE BLOB, though not Yeaworth's first directorial effort, is often slow-going; sometimes the Blob itself moves faster than the plot.  I remarked in my review of DINOSAURUS! -- the last Yeaworth-Harris collaboration-- that something always seemed to be happening in that film.  In contrast, when the Blob's not on the screen, events slow to a crawl that Yeaworth and his scripters must have believed to be suspenseful.

For me the lack of suspense inheres in the colorless characters inhabiting the small Pennsylvania town menaced by the molten monster.  Harris has claimed that he wanted to do a film with crossover appeal for the then-current "juvenile delinquency" genre, but he clearly didn't want to deal with the more visceral aspects of such films.  Everyone in town, from the local cops to the batch of "clean teens" led by Steve (Steve McQueen) and Jane (Aneta Corseaut), is so gol-darned nice that there's no conflict.  THE BLOB deserves points for adapting the "boy who cried wolf" trope to the teenager-flick, so that the teens are the only ones who must play "Paul Revere" in order to alert the slow-moving older generation to the danger of the Blob.  But the script just keeps rehashing this same basic plot-point without significant development.

There are interesting touches. Some of the local cops are war veterans, indicating a model of manly behavior to which the peacetime generation of the "baby boomers" may wish to compete with-- which Steve certainly does, by ferreting out the Blob's Achilles heel.  The continually interrupted romance of Steve and Jane is a little less interesting, with Jane functioning principally as an inspirational figure to Steve-- making her one of the less effective female personas in 1950s SF-cinema.  There might be some symbolic potential in the fact that the "shooting star" containing the Blob falls to Earth at the same time Steve's trying to make out with a reluctant Jane, who implies that his intentions may be dishonorable.  "Meteor-is interruptus," anyone?  Certainly the Blob ends up being responsible for a lot of trouble for which the local teens are blamed... 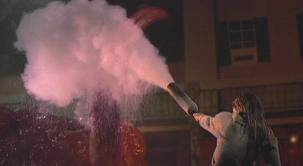 The 1988 film, scripted by Frank Darabont and director Chuck Russell, utilizes many of the same tropes that began the original film, but adds material of an edgier nature.  For a start, "good girl" Meg and her boyfriend Paul encounter an old man contaminated by the meteor-borne Blob, but Paul dies early in the picture, replaced by Brian, a "bad boy" character at odds with the local law.  Brian then teams with Meg to first expose the existence of the monster, and then to destroy it-- with touches of romantic interest along the way.  Meg, unlike Jane, isn't confined to being an inspirational figure.  Though not a "tough girl" as such, she steps up at the conclusion, helping Brian destroy the Blob by spraying it with machine-gun fire and luring it into a "cold trap."  Yet Brian is equally important in helping Meg out in times of peril.  I speculate that Russell and Darabont wanted to promote a sense of equality in giving the female character a sizeable role in monster-slaying, as well as validating the raffish charm of "bad boy" Brian over that of the respectable townie Paul.

In keeping with sociological developments of the 1980s, this Blob is created by a government experience as opposed to being of entirely alien origin.  Jack Harris went on record as disliking this development, but I find it a valid update of the original concept.  The appearance of Hazmat-suited government operatives in the rural town adds to the general paranoiac atmosphere, and gives Meg and Brian additional opponents when the teens learn that the government guys plan to raze the town to cover up their blunder.  A coda adds a fitting pessimistic touch.

The special effects of the Blob  are admirably ramped up via bluescreen and copious detailed models, which today would certainly be rendered by CGI.  The humor, while aimed at the 1980s juvenile market, is at least more on target than the fusty jokes of the 1958 film, which couldn't even pull off a scene in which the town principal has to put aside his prissy respectability and break a window with a brick.
Posted by Gene Phillips at 3:04 PM
Email ThisBlogThis!Share to TwitterShare to FacebookShare to Pinterest
Labels: the marvelous