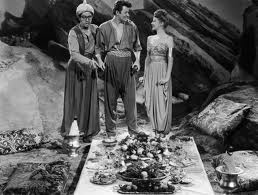 These two specimens of Arabian knockwurst don't offer anything new, but in contrast to 1942's ARABIAN NIGHTS, they both offer a lot of magical goings-on, as well as a wealth of pretty chorines in skimpy outfits.  I find them an interesting contrast in that though both are full of tongue-in-cheek anachronisms, ONE THOUSAND AND ONE NIGHTS is essentially a comedy with some adventure elements while SIREN OF BAGDAD is closer to the style of a Douglas Fairbanks adventure but with lots of comedy worked in.

In my essay on ARABIAN NIGHTS I showed how it was indebted to the 1940 THIEF OF BAGDAD.  Oddly, though the producers of THOUSAND took the trouble to cast Rex Ingram-- who played the genie in THIEF, and appears as another genie in exactly the same costume and makeup-- THOUSAND's plot is largely derived from the classic "Aladdin" plotline.  True, this Aladdin (Cornel Wilde) departs from the original in that he's a street-singer with dozens of girls on the hook.  In addition, he's called "Aladdin of Cathay" a couple of times.  Since "Cathay" was an archaic name for China, one presumes that either the scripter was ignorant of that fact or he was having fun tossing out names with wildly discordant meanings.

This Aladdin does encounter his true love Princess Armina (Adele Jergens) in a manner slightly reminiscent of the way Ahmad meets his love in the 1940 film, and this Aladdin does have a thief for a companion.  However, this thief is a jive-talking fellow named Abdullah (Phil Silvers), and he's the source of most of the anachronisms.  At one point he wishes for a gun, but realizes they haven't been invented yet.

Armina pines after Aladdin despite his reputation as a veil-chaser, but in the palace of the Sultan her father dire dealings are in progress.  The Sultan's twin brother sneaks into the palace, overcomes the Sultan, imprisons him, and takes his place.  When the Grand Vizier finds out, the false Sultan offers to give him the hand of Armina for his silence, and the Number Two villain agrees.

Aladdin and Abdullah fall in with Kofir, a sorcerer who wants them to do his dirty work, getting a rare lamp from a deep cavern.  The duo enter the cavern, play catch-as-catch-can with the guarding Ingram-genie, and find the lamp.  Kofir, playing the same role as the sorcerer in the original Aladdin story, refuses to release them from the cavern unless they give him the lamp.  They refuse, and he seals them in.  But soon Aladdin learns that the lamp contains the genie with the light red hair (Evelyn Keyes), who apparently doesn't want Abdullah to get all the funny false-history lines, since she claims her name is "Babs."  Babs, immediately falling in love with Aladdin, liberates the hero and his comic relief from the cavern.  She's less than happy at her next assignment: to help Aladdin marry Armina.  However, she pulls off the next part of the Aladdin storyline: conjuring up presents and a fabulous retinue to impress the Sultan.

Kofir, like his archaic analogue, recovers the lamp by means of the famed "new lamps for old" scam, with some help from Babs, who wants to foil the wedding.  Aladdin and Abdullah lose all their rich trappings, and have to go looking for the lamp once more.  The script gets rid of Kofir offscreen (he dies from the excitement of regaining his prize!) and the good guys have to chase down the lamp through its subsequent owners.  Eventually the heroes return to the palace, and with the aid of the genie's power and some belated swordplay from Aladdin, the real Sultan is returned to power, the happy couple is reunited and Babs consoles herself by conjuring up a double of Aladdin for her own, uh, pleasure.  In the film's most deliriously stupid anachronism, Abdullah becomes a medieval version of Frank Sinatra, wowing the bobbysox-wearing houris with his crooning magic. 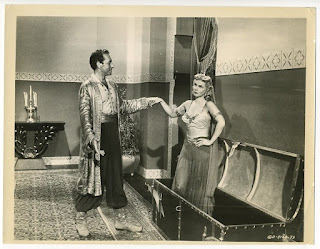 THOUSAND is incredibly silly, but it does show a little inventiveness.  SIREN OF BAGDAD, though like THOUSAND distributed by Columbia, was produced under the aegis of Sam Katzman, who was not well known for coloring outside the lines.  Paul Henreid plays Kazah  the Great, a magician who travels throughout the Persian Empire with a troupe of dancing girls and with Ben Ali, yet another acerbic sidekick who makes anachronistic remarks (Hans Conreid).  He gets involved with Princess Zendi (Patricia Medina), a freedom fighter opposed to a tyrannical Sultan who usurped the throne of Zendi's father, the rightful ruler (isn't there always some tyrant who got the job the *right* way?) But soon Zendi's primary concern becomes that of weaning playboy Kazah away from all those hot dancing-girls.

The only interesting aspect of SIREN is that the only magic in the story comes from the hero, rather than a genie or some similar being.  In the film's one attempt at verisimilitude, Kazah claims that his magic is all illusion, probably just so the scripter didn't have to rationalize his seeming miracles.  But when Kazah transforms Ben Ali into a beautiful woman (who talks in Hans Conreid's voice), I think we've departed from the vale of what phony magic can do.  Even though there's as much silliness on display here as in THOUSAND, SIREN follows the narrative pattern of the Arabic swashbuckler, with Kazah performing some bargain-basement athletics against the bad Sultan's minions.  There's enough action for me to label this a "combative" film, whereas the one measley swordfight in THOUSAND-- which more than anything follows the pattern of the musical comedy-- need not even apply.

Posted by Gene Phillips at 3:27 PM
Email ThisBlogThis!Share to TwitterShare to FacebookShare to Pinterest
Labels: combative adventures, the marvelous