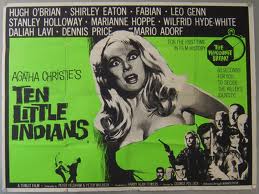 Though Agatha Christie's 1939 novel AND THEN THERE WERE NONE (originally published under a more controversial title) is the work best-known for the "victims-picked-off-by-vengeful-killer" trope, a 1930 novel, THE INVISIBLE HOST,  preceded Christie by almost a decade.  In addition, about eleven years before the first film adaptation of the Christie novel, Roy William Neill directed a low-budget adaptation of HOST, entitled THE NINTH GUEST.

GUEST, though produced during the same year that Neill helmed the lackluster BLACK MOON, is a concise little thriller about eight individuals, all unacquainted with one another, being invited to a penthouse by an anonymous invitation.  Once they're all confined, the victims find that an electrified grille keeps them from leaving, while pre-recorded messages inform the eight guests that they will all be visited by a "ninth guest"-- the spectre of Death. After several guests perish through one stratagem or another, the two characters Most Likely to Become a Romantic Couple solve the mystery and expose the killer.  Though the electrified grill is the only "outre device" the killer uses, that device, as well as his invocation of the "ninth guest," gives him a level of 'strangeness" not present in either the Christie work or its film adaptations-- though I have seen many of those adaptations included in some fantasy-film concordances.

TEN LITTLE INDIANS, a "swinging sixties" version of Christie's rather button-down concept, rings in a few minor changes, such as imprisoning the killer's selected victims in a chalet at the top of a snow-covered mountain.  The killer, who indirectly reveals himself with the assumed name "Mr. U.N. Owen" (voiced by Christopher Lee), uses a variety of inventive methods to knock off the victims in tune with the "ten little indians" nursery rhyme.  However, while his murder-methods are certainly bizarre in comparison with most real-world manifestations of murder, I find that none of them have the quality of *strangeness* that would propel the concept into the realm of the uncanny.

Both films are pleasant to watch but I grade both as "poor" on the mythicity scale since they do so little with the central theme of "fated death."  INDIANS even throws a number of Christmas motifs at the beginning but does nothing to give them symbolic significance in the story.

However, though INDIANS and GUEST are both black-and-white films, INDIANS comes off with a greater appearance of glamor, thanks to the casting of Shirley Eaton and Daliah Lavi at the height of their pulchritudinous presences.

Posted by Gene Phillips at 4:49 PM
Email ThisBlogThis!Share to TwitterShare to FacebookShare to Pinterest
Labels: bizarre crimes (n), bizarre crimes (u), diabolical devices (u), the naturalistic, the uncanny