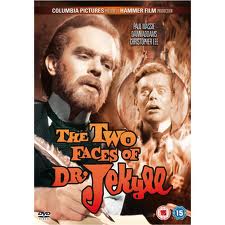 Critically speaking, there are two sides to the Wolf Mankowitz script for TWO FACES.  On one hand, it’s refreshing to see a Jekyll-Hyde film that doesn’t tediously follow the pattern set by the Thomas Russell Sullivan stage-adaptation of the Stevenson story.  On the other hand, the changes wrought by Mankowitz and director Terence Fisher suggest that there’s a point beyond which change for its own sake can vitiate the concept being re-interpreted.


This version loosely follows Stevenson’s concept of Jekyll as a man obsessed with the two-sided nature of man.  This Jekyll (Paul Massie), alienated by the scientific community’s scornful reception of his theories, reframes Stevenson’s “angel / devil” dichotomy in terms of man’s transcendence of moral laws.  Jekyll tells Ernst, his elderly chorus-like confidante, that man could be transformed into either “man as he could be,” advanced beyond moral laws, or “man as he would be,” one who simply ignored moral laws.  Either way, Jekyll is determined to use science—which he claims must “release and understand every force of nature”—to set aside moral law.


In scripts indebted to the Sullivan play, Jekyll is motivated to unleash his “inner Hyde” because the nasty father of Jekyll’s fiancée cuts the good doctor off at the nuptials. Some scripts add a seductive lower-class female who tempts Jekyll to abandon fidelity and propriety.  This character usually meets a sad fate when Hyde takes over and subjects the woman to his sadistic pleasures.


In this film, the opposition of a “heavy father” has been excluded.  Moments after Jekyll outlines his theory to Ernst, the audience meets Kitty Jekyll.  She tells her husband that his old friend Paul Allen (Christopher Lee) has appeared at their door, as usual looking for money to pay his gambling-debts.  Kitty complains of Allen’s excesses, but soon the audience learns that her displeasure is a sham: Kitty and Allen are conducting an affair almost in front of Jekyll’s unobservant eyes.


Despite Ernest’s disapproval, it’s plain that Jekyll has already tried out his new serum on himself, for Kitty mentions having heard a strange voice in Jekyll’s lab when only he was supposed to be there.  Later, as Kitty departs for a party, where she plans to hook up with Allen, Jekyll utters a last cry for help, urging her to stay with him.  Even without his knowledge of her betrayal, Kitty's cold-hearted refusal pushes Jekyll over the edge.


Where some films have rendered Hyde as a grotesque monster, TWO FACES’s Hyde hews closer to the Stevenson story, where Hyde is noticeably younger than Jekyll.  The film accomplishes this minor transformation simply by having the bearded Paul Massie doff his facial hair, becoming a more epicene figure.  As Hyde Jekyll attends the party and finds out about he’s being cuckolded.  Hyde worms his way into the confidences of Allen and Kitty, planning to betray them in turn.  Only once does Hyde show his murderous side, almost killing an obnoxious pimp.


Hyde also takes advantage of his new anonymity to approach Maria, a salacious-looking snake-dancer.  Though he uses his more forceful personality to win her favors, Hyde never maltreats Maria.  In a much later scene Maria tells him that she loves him, suggesting that Jekyll and his alter-ego aren’t incapable of finding a way out of Jekyll’s dead-end relationship with his cheating wife and traitorous friend.


However, Jekyll in his Hyde-persona remains fixated on his wife.  As Hyde he attempts to seduce his wife as he did Maria. He fails miserably, for though Kitty is a conniver, she genuinely loves Paul Allen, and she’s no more attracted to Hyde than to her husband.  Hyde then uses Jekyll’s money to buy up Allen’s debts.  Holding the whip hand over Allen, Hyde forces him to become his guide into London’s dens of iniquity.  Again Hyde tries to use his hold over Allen to blackmail Kitty, and again he fails.


Jekyll manages to re-assert his persona temporarily, but his obsession with his wife’s infidelity brings Hyde back into play.  Unable to best Allen in the bedchamber, Hyde takes the next best course and murders Allen, using a “trophy” from his one sexual conquest—killing Allen with Maria’s poisonous snake.  Kitty finds her lover dead and takes her own life.


At this point, there’s little left for Jekyll to do, except to take refuge in his normal persona and set things up so that the never-to-be-found Hyde takes the blame for Allen’s murder.  However, as if to validate Ernst’s moralistic vision of the world, Jekyll is unable to allow himself to get away with the crime, and exposes his own iniquity before witnesses.


The script’s invention of Paul Allen has one precursor: in the 1920 silent film-adaptation, Jekyll’s prospective father-in-law acts less like a domestic tyrant and more like a roué.  However, it’s unlikely that Mankowitz sought to emulate that one element of the earlier film.  It’s more likely that both films took some influence from Oscar Wilde’s classic PICTURE OF DORIAN GREY, where a younger man falls under the influence of an older reprobate.


I said earlier that change for change’s sake could vitiate a given concept. Although TWO FACES is intelligently and logically mounted, it lacks the deeper mythopoeic roots of both the Stevenson story and the better films that drew on the Sullivan play.  It’s arguable that much of the mythic pleasure of Mister Hyde is seeing him let loose on innocent humanity, albeit with the knowledge that his excesses will somehow be curbed.  But the Mankowtiz-Fisher Hyde seems more “idiot” than “id,” and never rises above the cliché of a cuckolded husband out for revenge.  Mundane though this trope is, it’s possible to use it to evoke psychologically-based mythicity. Fisher was able to do so in films like HORROR OF DRACULA and BRIDES OF DRACULA, so the fault would seem to lie in Mankowitz’s script, where his characters feel compulsions toward forbidden loves but remain, as characters, less than compelling.

Posted by Gene Phillips at 2:34 PM
Email ThisBlogThis!Share to TwitterShare to FacebookShare to Pinterest
Labels: the marvelous