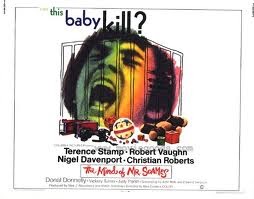 THE MIND OF MISTER SOAMES, a British film released under the Amicus banner, deals with a man, John Soames (Terence Stamp), who is born in a coma and stays in it for twentysomething years.  Though there seems to be no hope of his awakening, a Brit hospital run by one Doctor Maitland (Nigel Davenport) keeps Soames alive and uses therapy to prevent muscle atrophy.  Along comes Doctor Bergen (Robert Vaughn), who invents a way to awaken Soames through the use of electric shocks.  Thus Maitland and Bergen become the custodians of a man "born" as an adult, yet with the mind of an infant.

I haven't read the original novel by English author Charles Eric Maine.  SOAMES the movie however feels like a very talky novel translated into film, with decidedly mediocre effects.  The only exception to the mediocrity is Stamp's performance as a baby in a man's body.

The only conflict, if one can call it that, appears between the two doctors.  Bergen favors a slow, maternal approach to Soames' pedagogical program, while Maitland is the "demanding father," insisting that Soames master adult skills in jig time, without paying even superficial attention to the normal developmental processes.  There might have been some potential in this conflict had Maitland been given credible motivations for his tyrannical nature, but the audience sees less articulation in his character than in the standard mad-scientist of B-movie fame.  Bergen is no better, he's simply the "good doctor," while Soames, the only other main character, is the innocent caught in the middle.  The script is really not concerned with illustrating the problems of normal child-rearing with respect to a full-grown man-- issues of sexuality and potty-training, for instance, are entirely omitted.  The script's main concern is to find a way to jazz up the medical theme by turning Soames into a "monster." Soames eventually breaks free from the hospital-grounds for a brief walkabout in London, which is poorly handled but still contains the most interesting scenes.  Like most monsters he dies at the close, but the script fails to evoke any real tragedy, choosing to paint by the numbers.

Neither Soames' coma nor Bergen's revival procedure is "marvelous."  What we're dealing with here is the uncanny trope of "freakish flesh," which most often denotes stories about characters with deformities.  In SOAMES, however, the child-man is the victim of a neural disorder, which arguably distorts his potential for a full life as much as any deformity.


Posted by Gene Phillips at 2:35 PM
Email ThisBlogThis!Share to TwitterShare to FacebookShare to Pinterest
Labels: freakish flesh (u), the uncanny