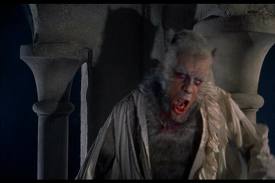 
“Oh, the terrible disgrace, the ignominy of it—possessing a mythical monster in one’s family, in this age of science and enlightenment!”—Aymar, “father” to a werewolf in Guy Endore’s WEREWOLF OF PARIS, p. 128.

It’s become commonplace to observe that the mythology of the vampire, as created by both European folklore and modern pop culture, parodies such Christian tropes as resurrection and communion.  Werewolves share with vampires a common European heritage, but only rarely have modern fiction-writers attempted to dovetail werewolf lore with Christian symbolism—with the notable exception of Hammer Studios’ CURSE OF THE WEREWOLF.  But though Guy Endore’s novel provides a few important motifs, the credit for conjuring up a religion-haunted wolfman properly belongs to director Terence Fisher and producer-writer Anthony Hinds.

The above quote, in which the werewolf character’s quasi-father describes his shame at having a “mythical monster” in the family, captures author Endore’s apparent distaste at writing a book with a werewolf in it.  Though Endore was known for scripting 1930s horror-movies like MAD LOVE and MARK OF THE VAMPIRE, in PARIS he goes out of his way to minimize the story's horror-tropes.  Occasionally Endore dispenses bits of werewolf lore in desultory fashion, almost saying to the reader, “Here’s what you expect; go nuts.”  PARIS is a rambling, Hugo-esque novel set during the Franco-Prussian War, in which the violence of one solitary werewolf comes to seem minor next to the violence of the normal human species.  In Fryean terms Endore’s novel is an “irony,” in that all of the characters—whom Endore uniformly renders as flat and unappealing—have no chance for happiness or closure.  Endore’s contributions to Hinds’ CURSE script come down to three items.

In both works the werewolf-infant is born on Christmas Day, with the implication that the fact of his being born on Jesus’ birthday is an offense to an unfair God, who dooms the mortal infant to bestialism for such impertinence.  Endore implies that his wolfish protagonist Bertrand may be re-enacting the fate of an ancestor who was reduced to a human wolf.  Hinds allows for a little more supernatural leeway, in that a priest opines that there are malignant spirits that can bring about werewolfism in those humans—like the film’s protagonist Leon-- who prove too spiritually weak to resist pollution.

In Endore, Bertrand’s father is a scurrilous Catholic priest who impregnates a maid working for a rich family.  Out of a desire to minimize scandal, the family takes in both Bertrand and his mother.  One member of the rich family, Aymar, becomes the defacto father to Bertrand, and the novel ends with Aymar having Bertrand committed to an asylum where Bertrand perishes.  Hinds offers a more dramatic resolution: after the death of Leon’s mother in childbirth, Leon is adopted by a wealthy family, and when Leon’s adoptive father Don Alfredo learns of his charge’s monstrous nature, the don must execute his “son” with a silver bullet.

Finally, the film owes its bravura opening sequence to an idea Endore basically tosses off.  In the novel, long before Bertrand is born, one of his ancestors poses as a monk in order to assassinate the occupants of a French castle; upon being caught, he’s confined for life to a cell and reduced to an animal.  Much later, one of his descendants in the same family spawns Bertrand.  Hinds immeasurably improves on this scenario, changing the setting to Spain and introducing a beggar who seeks charity from a castle of bored Spanish  aristocrats.  On a whim the castle-lord imprisons the beggar for so long that he becomes a virtual beast.  Later another aristocrat punishes a maid by jailing her with the maddened beggar, and the offspring of the maid’s rape by the beggar is Leon.  Of the many Hammer narratives that critiqued the fundamental ugliness of the aristocracy, CURSE is the most successful, showing how the attempt of men to play God torments not only the innocents they directly victimize but also their offspring, who becomes a figurative offense to God, a beast in man’s clothing.

Whereas Endore is so busy with his calculated ironies that he barely gives Bertrand any characterization, Hinds makes his narrative all about Leon.  As a child Leon experiences a few manifestations of early blood-lust, but fittingly he doesn’t take on the full status of werewolf nature until he hits the tempestuous years of adolescence.  As played by Oliver Reed, Leon is entirely sympathetic in his desire to forge his own destiny and find love.  Predictably enough, this commoner finds that love with a girl of the aristocracy.  Still, Hinds’ script and Fisher’s direction make the romantic liaison enjoyable despite its clichéd nature.

None of the characters in Hinds’ script except Leon do anything more than perform their basic functions in the script.  The tormented beggar and maid, the girlfriend, Don Alfredo dourly anticipating the doom of his adoptive son—they’re largely ciphers aside from their participation in Leon’s life.  Nevertheless, this is the nature of a good werewolf film: in contrast to the Endore novel, CURSE is all about the wonder and terror of seeing a man become a beast—though to be sure, Leon doesn’t become a full-fledged wolf-man until the last ten minutes of the film.

That conclusion, appropriately, takes place in a church, where wolf-Leon recoils from the ringing of the church-bells just before Don Alfredo arrives to finish off his adoptive son.  And though Leon is just as doomed as Endore’s Bertrand, there’s a league of difference in the ways each of the characters are doomed.  Bertrand’s doom projects the irony’s avoidance of affect, mocking the idea that his fate should mean anything.  Leon’s doom carries the overtones of tragic drama, in that he’s denied satisfaction in a world where some people do manage to live fruitful lives-- arguably making his death far more pathetic. Leon-- named for a beast sometimes associated with Jesus in Christian iconography-- doesn't die to redeem man's sins, but he certainly does die because of them.

Posted by Gene Phillips at 1:36 PM
Email ThisBlogThis!Share to TwitterShare to FacebookShare to Pinterest
Labels: the marvelous