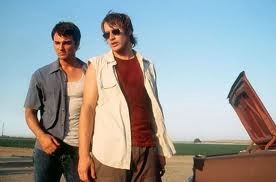 
THE FORSAKEN, a male-bonding road-movie with vampires, is an interesting misfire.

Twenty-something Sean, a dutiful young film-editor, is given the task of driving a valuable car cross-country.  While passing through a desolate part of the Southwest, far from most human habitations, he encounters a hitcher named Nick.  Sean gives Nick a lift and later is drawn into the world of vampire hunting, for Nick has been infected by vampirism.  The only way he can avoid becoming a full vampire is to kill the head vampire responsible for his infection, who is also passing through the same area.  Head vampire "Kit" travels with a small retinue of fellow vamps and one human servant, the latter used to drive them about during the day, when the bloodsuckers dare not face the sun.

Sean wants no part of Nick's weird world, but when Sean is bitten by another almost-vamp, the young man has no choice.  Though the vampires are stronger and resist most methods of death-dealing, Nick knows their special list of weaknesses-- the sun, fire, and holy ground-- and seeks to draw them to a place where he can destroy them.  Conservative, rule-following Sean must step up and become a fearless vampire killer or be recruited by the ranks of the undead.

While the basic scenario has the potential to rank with Kathryn Bigelow's vampire-western NEAR DARK, writer-director J.S. Cardone doesn't work hard enough to give his characters the degree of characterization they need.  Sean and Nick cart around one of the vampires' victims for most of the film, but she remains so traumatized that she barely reacts to their circumstances (possibly a lame attempt to emulate a character from NIGHT OF THE LIVING DEAD).  The trashy vampires, from leader Kit to his charismatic girlfriend Cym, are also little more than ciphers.  Sean and Nick have the best lines and the actors play well with what they're given, but they rarely succeed in evoking more than superficial aspects of their opposed characters: Sean the Conservative Plodder and Nick the Moody Rebel.  The final scene of the film has a certain charm based on those stereotypes, but the film doesn't foreshadow Sean's transformation adequately.  Further, Cardone mixes his tropes carelessly, citing demonic possession as the origin of the vampires, yet claiming that vampirism is passed like a "telegenic" virus. 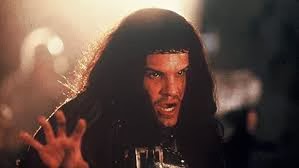 All of FORSAKEN's failings, however, gleam like gold next to the abortion that is MERLIN: THE RETURN.  Given that this film was made by the United Kingdom-- though parts were shot in South Africa-- one half expects King Arthur to come back from death to avenge his horrible treatment in this film.  Britons are usually known for having some respect for Matters Arthurian, but this may well be the worst treatment of these matters by any filmmaker in any country-- and there have been some awful Arthur-films over the years.

This is obviously a film shot on a handful of limited (and limiting) sets, to judge by the way the actors seem unable to move about freely.  A dithering version of Merlin is the central hero of the plot, traveling to the 20th century in order to prevent a mad scientist (Tia Carrere) from releasing Morgan LeFay and her son Mordred from the magical prison to which Merlin confined them.  Confined in the same prison, for reasons that escaped me, were the adulterous duo Lancelot and Guinevere.  Arthur and his knights also appear in the 20th century and try to fight a truck before Merlin finds them and sets them right.

The quotations of familiar Arthurian tropes and characters are passionless, the costumes are offenses to the eye and even decent actors like Tia Carrere and Adrian Paul seem to be flailing about, trying to find something interesting to do.  Two kid-actors get the best lines, so I must assume that writer-director Paul Matthews thought he was doing a kiddie-confection.  Whether he had no talent for the Matter of Arthur, or was coasting because he was making a juvenile feature, the result is the same: an awful bore that doesn't even have the saving grace of being unintentionally funny.

Posted by Gene Phillips at 3:36 PM
Email ThisBlogThis!Share to TwitterShare to FacebookShare to Pinterest
Labels: the marvelous