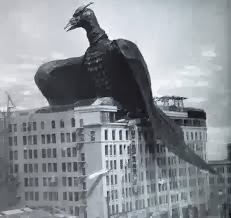 
I've watched the original RODAN several times, but without exception the film always seems a terrible follow-up to the greatness of the original *kaiju eiga,* GODZILLA.  Whereas Godzilla goes beyond the limits of simple allegory-- the nuclear-powered sleep of reason produces monsters-- Rodan seems no more than a quick knockoff of the themes underlying the first Godzilla film.  I've derived some modest enjoyment from the big pteranodon's presence in Toho's "monster mash" films, but the original film strikes me as dull.


Though Rodan can be somewhat impressive in flight, when he soars over rooftops and blasts them asunder with his hurricane winds, the monster's design never looks organic in the least, even making concessions for the limits of "suitmation."  I even prefer the avian terror of 1957's THE GIANT CLAW, since the only really ludicrous thing about the giant bird of that film is its goony-looking head.  With Rodan I dislike not only the head design, but also the spiked chest and the awkward, topheavy look of the creature when it stands upright.


The human interest of the RODAN film shows none of the wit or clarity of the preceding Godzilla film; the viewpoint characters exist purely to showcase the monster-- or rather, monsters, since the film starts with the appearance of giant caterpillars in a Japanese mine, and then introduces the two much bigger prehistoric creatures that feed on the caterpillars: a male and a female "Rodan," as they're named by the awestruck humans.


The plot doesn't stand much examination: the newly awakened Rodans wreak havoc wherever they fly, the armed forces respond by trying to shoot them down.  Only at the conclusion does the script shoot for any deeper resonance in the beasts. When the army learns that the Rodans have concealed themselves in a dormant volcano, they shell the mountain, hoping to trigger an eruption.  The resulting lava-tide traps one of the ancient birds, and its mate perishes in attempting a rescue.  The film's last words by one of the viewpoint characters exhibit what some might call the Japanese fascination with the spectacle of heroic death. 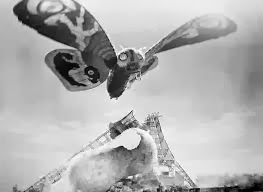 MOTHRA boasts a superior kaiju script in all respects.  Even if the titular monster had been poorly conceived or designed, I'd still find the viewpoint characters charming in their wonder at the monster's strangeness and their moral defense of nonhuman forms in life in the face of economic exploitation.  Even the character who's there to provide comic relief is much more palatable than most such characters.


But Mothra, the true star of the show, is in her original form one of the best creatures from the Golden Age of monster cinema.  Whereas most monsters of this period were "fish out of water," usually prehistoric animals violently translated to the modern era, Mothra is a creature that has been perennially reborn from archaic times to the present-- reborn within its isolated environment, the so-called "Infant Island."  One does not know in this film how the first Mothra came into being, only that the creature begins as a gigantic larva, capable of spinning yards of silk, both in self-defense and for the purpose of creating a cocoon.  After gestating in its cocoon, the larva emerges as a gargantuan moth, who borrows Rodan's routine of whipping up cyclonic winds with its wings (and frankly, doing it much better). The giant moth then lays an egg in which one or more Mothrae will be born once the parent has passed on.

The film also succeeds by taking the kaiju genre in a new direction, rather than simply reiterating the antinuclear critique of GODZILLA.  The film begins with a scientific expedition to Infant Island, underwritten by the corrupt financiers of "Rosilica" (a stand-in for the United States).  The well-meaning Japanese scientists along for the ride are horrified to see the Rosilicans slaughter the islanders in order to kidnap the two priestesses of the Mothra-cult; doll-sized "fairies" whom the Rosilicans wish to place on display to the curious public.  This plot may have been derived in part from the model of KING KONG, where the economic exploiters shanghai not a dangerous beast worshipped by natives. Rather, the kidnappers take the priestesses who are part of that worship-- which nonetheless results in a dangerous beast coming after the transgressors.

MOTHRA is also a film with a great sense of color: though the larva-form of Mothra is a dull brown, the moth-form is a dazzling creation, in vivid contrast to most giant beasties, who tend to be monochromatic.  The creature seems almost too delicate to withstand the cannons of Japan's self-defense forces, or the atomic heat-ray of the "Rosilicians"-- which is a rather "back-door" way of injecting some critique of nuclear power into the film.

True, in the monster-mash films it was sometimes harder to make Mothra's power convincing in the presence of hulking brutes like Godzilla and Rodan.  But the original film maintains its own integrity in this matter, managing to strike a balance between the fairy-tale quality of Mothra's island-existence and the modern technologies which humankind employs against the great creature.  In addition, this is a rare monster-film that emphasizes the hegemony of feminine nature, represented not only by the egg-laying moth but also by the twin priestesses, whose doubled nature makes them more uncanny than a single priestess would have been.  Thus MOTHRA's critique of modern civilization is one of the few monster-films not to display a masculine gender-bias.


Posted by Gene Phillips at 3:31 PM
Email ThisBlogThis!Share to TwitterShare to FacebookShare to Pinterest
Labels: combative dramas, the marvelous