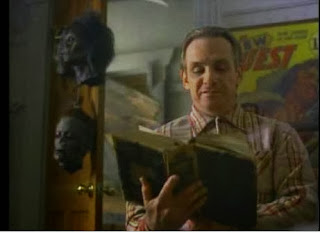 The best way to regard the 2000 "fictionalized-reality" film ED GEIN would be to deem it the "anti-PSYCHO" of Ed Gein movies.

Robert Bloch said that his 1959 novel PSYCHO, on which Alfred Hitchcock based his classic work, was written with only a cursory knowledge of the then-recent Gein case.  Both book and movie are frequently the subject of online debates, as to whether or not they are "real horror."  This debate stems in part out of a tendency to associate horror with the supernatural-- a department of my category "the marvelous"-- or at least with the appearance of the supernatural.  But since the movie's version of Norman Bates does not invoke the supernatural, the argument goes, Hitchcock's PSYCHO does not qualify as "horror."  It's too real, given that Norman's exploits-- psychotic gore-murders and grave-robbing-- are just as possible in our world as in his, though the real-life Gein went a good deal farther than Norman did.

I've long argued on this blog that the determining factor for metaphenomenal films-- including both the uncanny and the marvelous-- is not what divided them but what unites them: the sense of "strangeness."  If this were not the case, then we would have to judge Bloch's book to be horror because in the novel Norman tries to use occult books to resurrect his mother, while Hitchcock's film is not horror, because the script dispensed with this detail.  The uniting factor in both, whether the supernatural is invoked or not, is the "strangeness" communicated by the figure of Norman Bates, my favorite example for the trope of the "perilous psycho."

Oddly, one detail in ED GEIN's meticulous examination of the rural Wisconsin murderer's history sounds more like Bloch than Hitchcock: for one scene, Gein does read from some book, attempting, like Bloch's Norman, to raise his mother from the dead.  Yet, that minor invocation of supernaturalism does not imbue ED GEIN with "strangeness." Nor does the quality of strangeness descend from any of the other factors that make up Gein's legend-- the gory murders, his fetish for shrunken heads (see the still above), his rearrangements of corpse-parts-- including a 'woman-suit"--or Gein's hallucinations of his dead mother talking to him.   These are all *potentially* elements for evoking the feeling of strangeness.  But ED GEIN pursues the approach I called "fictionalized-reality" above, meaning that Gein is rendered with a pathetic, no-larger-than-life treatment by lead actor (and executive producer) Steve Railsback.  Thus I judge that this version of Gein, unlike Norman Bates and other fictional icons spawned by Gein, to be purely "naturalistic."

With those categorization issues out of the way, ED GEIN is an extremely artful "fictionalized-reality" endeavor, many leagues above the clumsy, over-earnest biofilms that sell so many commercials for the Lifetime Channel.  The Oedipal influences on Gein-- a weak, drunkard father who dies in Gein's youth, a domineering mother who tries to use religion to bind him to her-- are handled with a direct simplicity.  Thus, when the audience views the processes through which his personality became irrevocably warped, the audience is not allowed to sit in judgment, or to hold the fatuous belief that It All Could've Been Prevented With Better Social Workers (as in the standard Lifetime flick).  I'm not an expert on Gein's history, so I can't say whether or not it's true that, contrary to most fictional characters based on the murderer, Gein never pursued nubile young women a la Janet Leigh, but only wanted mature females who reminded him of his mother.  But here too, the issue is handled with restraint and a strong sense of the realities of small-town life.

Cast, direction and script possess this same simple, understated quality, but ED GEIN is all Railsback's show: it stands or falls on his performance-- which is to say, it stands quite well.  Though the film is uncompromising in its matter-of-fact presentation of Gein's ghastly acts, I judge it to be a "drama" rather than an "irony" like both film-versions of PSYCHO and Hitchcock's FRENZY.  Even though Gein is unquestionably a dark soul, the script does not use him as a lens through which to view the general ineffectuality of mankind.  Since even the Wisconsin psycho's victims retain a certain degree of human dignity, the story registers as belonging to the mythos of the drama.
Posted by Gene Phillips at 3:21 PM
Email ThisBlogThis!Share to TwitterShare to FacebookShare to Pinterest
Labels: delirious dreams and fallacious figments (n), perilous psychos (n), the naturalistic