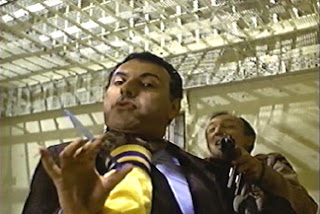 
Although I doubt that any serious critics these days believe in analyzing all films through a Freudian lens, the Viennese doctor has had no small impact on modern culture, including that of filmmakers.  This impact usually sorts out into three types of influence:

(1) Films in which either an original film or the work from which a film is adapted show obvious intellectual indebtedness to Freud, as with Peter Sasdy's HANDS OF THE RIPPER  and Robert Bloch's PSYCHO, respectively.

(2) Films which seem to be largely innocent of Freudian influence, such as Sam Newfield's 1943 DEAD MEN WALK.

(3) Films in which it's likely that the filmmakers had some basic knowledge of Freud, but it's hard to tell whether or not Oedipal motifs crop up intentionally or not, as with both George Waggner's 1941 WOLF MAN and Larry Cohen's 1981 FULL MOON HIGH.

In his 1985 DREADFUL PLEASURES academic James Twitchell argued that Waggner's WOLF MAN-- of which Cohen's film is a partial spoof-- recapitulated Oedipal motifs.  Twitchell's argument takes a position of the Good Doctor himself and many of his followers-- most prominently Otto Rank-- that any tensions between male siblings, or between a father and son, derived from the inevitable conflict of males over a mother-figure (for the siblings) or a wife/mother-figure (for the father and son).  According to Freud, Rank, and Twitchell, there doesn't even have to be a real "bone" for the male dogs to fight over. The mere existence of the tensions "proves" the Oedipal conflict.  Thus Twitchell had no problem in arguing Oedipal motifs in THE WOLF MAN even though protagonist Larry's mother is (presumably) dead and gone, and Larry never has no quarrel with his father over any woman.  Maleva, who is not related to either man, is the only maternal character in the story, but neither man is interested in her erotically, nor does either one want to be drawn into her world of witches and werewolves.  Unlike Twitchell, I can't credence the idea of Oedipal motifs in any work that doesn't feature some sort of conflicted erotic desire, however suppressed.

Now though I don't believe that Waggner's movie holds any fruit for the devout Freudian, I feel it likely that Larry Cohen had some idea of "Freudian-izing" the WOLF MAN story for his own film.  In this Cohen may have been influenced by an earlier (and superior) spoof of a Universal Studios horror-concept, Mel Brooks' 1974 YOUNG FRANKENSTEIN, whose intentionally-articulated Freudian motifs I discussed here.  I emphasize that it's "hard to tell" with MOON because Cohen's script is much more "all over the place" than that of the Brooks film.

And yet, MOON does seem as if it goes the extra mile to give its protagonist an embarrassment of riches in terms of the "mother-substitutes" lacking in WOLF MAN, and more "father-substitutes" to boot.

The film begins in the town of Full Moon in 1950, when high-schooler Tony Walker has become a prominent football-player.  Tony's relatively happy in this position, particularly since he has an ardent admirer, fellow student Jane, with whom he's already shared a few rolls in the hay.  To be sure, he does have a heavy-handed father, usually addressed only as "Dad." Mister Walker shows no particular interest in Tony himself, but like the people of Full Moon (and its high school) he dearly hopes to see Tony win a big game with the town's perennial rival in the town of Simpson.  His mother's evidently been gone a long time, for he barely remembers her, and confuses her with the maid, who cared for him before she absconded with the silverware.  The unnamed mother cost Walker a little more, since she departed with his entire bank account.  Soon the audience gets some idea as to why Mrs. Walker may've left.  Walker, who claims an affiliation with the CIA, invites his son to travel with him to fabled Rumania, where Walker plans to pick up a microfilm drop.  However, once they've arrived Tony's pretty much on his own, as "Dad" uses the trip as an excuse to have some fun with the local ladies of the evening.

While dining alone, Tony meets the first of many strange women in his life: a Rumanian fortune-teller who reads his palm and tells him he suffers the curse of the Pentagram, that he's doomed to become a werewolf and wander the earth in an unaging state until he fulfills a destiny.  The fortune-teller is clearly a goof on Maleva of the WOLF MAN, but there's no obvious connection between her and the werewolf who comes across Tony in the night and administers the expected bite.  Back to the USA go Tony and his dad, and Tony gets the first clue of his new condition during the flight, when he routs a group of plane-hijackers en route.

Back in high school Tony realizes he must stay away from his girlfriend Jane due to the approach of the full moon.  This is almost surely the first time a male character ever put off a female character due to "the time of the month."  Tony's werewolf, however, is never filled with any burning bloodlust; he contents himself with accosting young women-- or, unintentionally, men-- and biting them in the butts.  Jane's would-be paramour Jack swears to find the werewolf, but he never has the chance.  "Dad" makes the mistake of bugging Tonywhen he's about to make the change, and has to flee his hirsute offspring, concealing himself in their fallout shelter.  Dad's own stupidity, rather than the werewolf's claws, brings about his death.  Tony, filled with remorse, leaves Full Moon without finishing his senior year or winning the big game.  He spends twenty years in Europe, presumably biting foreign butts, until he decides that the fortune-teller's prophecy meant that he had to win the big game to undo his curse.

Tony returns to Full Moon and enters his old school again, pretending to be his own son, "Tony Walker Junior."  A twenty-years-older Jane--Roz Kelly, thirteen years older than star Adam Arkin--has married Jack, now the police chief.  She's more than a little interested in Junior, opining that "he could have been my son."  Tony has a glancing romantic contact with teacher Miss Montgomery, played by Elizabeth Hartman, in real life the same age as Roz Kelly.  Later Tony makes a more substantial relationship with Ricki.  She's played by Joanne Nail, represented as a high-schooler, though she was nine years older than Arkin, who was himself about seven years too old to be a high school senior.  When Jane finally gets a look at "Tony Junior," she recognizes him as her long-lost lover and tries to inveigle him into a relationship, preferably one in which he bites her and makes her immortal too.  It never gets anywhere, prevented by Tony's accidental encounters with several items of the werewolf's bane, silver.

Tony reaches a crisis point when he assaults Miss Montgomery in her home-- where she already has another student doing a "makeup exam."  The script implies that he kills her, but prior to revealing her actual situation, the audience only knows that Tony becomes so upset that he decides to expose his secret to the world.  He intends to make this revelation with the help of Ricki, but she mistakes his intention of filming his transformation for a kinky sex-escapade.  The resultant brawl between Ricki and the werewolf works out pretty well for Ricky, who threatens the wolf in an obvious PSYCHO riff, and then calms him down by acting in a more nurturing-- might we say maternal?-- manner.

After Tony reveals his lupine nature, the local law officers lock him up and call in a specialist in abnormal psychology, Doctor Brand (Alan Arkin, real-life father of Adam).  Brand makes a heavier father-figure than either Dad Walker or the middle-aged Jack, for he practices a hectoring, confrontational style of pop psychology.  Rather than being an obvious Freud-parody, he seems loosely patterned upon either Freud's discipline Wilhelm Reich or one of Reich's influences, like Arthur Janov.  However, Brand only wants to have Tony killed and to dissect his corpse.  Tony escapes jail and decides to try playing in the Big Game Against Simpson.  This leads to a protracted comic conclusion in which the following occurs:

(1) Tony, in werewolf-form, wins the big game but his curse isn't cancelled out.

(2) Brand tries to kill Tony with silver bullets and fails, after which Tony finally does kill someone-- appropriately, an evil and negligent father-figure.

(3) Jane pledges her eternal love to the dying werewolf and then suddenly develops an allergy to fur, while Ricki starts becoming enamored of Jane's neglected husband Jack.

(4) Tony comes back to life and tells the audience that "inflation" made it impossible to kill a werewolf with a mere six bullets.  Then he goes hunting for Miss Montgomery, who wasn't killed but turned into a werewolf, whom Tony wants to have bite him all over again.  Thus the film ends with Tony satisfying his dead father's main desire-- to win the Big Game-- yet he continues to violate the Oedipal taboo by linking up with a "mother-surrogate" by whom he'll have a lot of hairy children.

Cohen's script, as I said above, is all over the place.  Because the film is only fitfully funny, it's never gained the status of a "cult comedy."  But in Cohen's fuzzy attempt to rewrite the Waggner WOLF MAN, MOON does suggest some of the transgressive content that usually makes for cult comedies.  Had Cohen been a little more organized, and a little more taboo-breaking, MOON might be better remembered today.


Posted by Gene Phillips at 2:42 PM
Email ThisBlogThis!Share to TwitterShare to FacebookShare to Pinterest
Labels: the marvelous