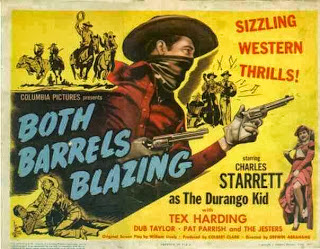 In my review of the last Durango Kid movie, I said:

The scene in which the black-clad masked man threatens the villain with execution gives that scene a touch of the uncanny that one would never get from a similar threat made by Gene Autry.

By saying that, I didn't mean to suggest that a given Durango Kid would not fit my category of "the uncanny" unless it conveyed such an emotion.  The only reason to regard these films as metaphenomenal is based on the POTENTIAL to create such emotions, not in the actual execution.  Though the masked western-hero of this series never became a name to conjure with, along the lines of the Lone Ranger-- or even Marvel's "Two-Gun Kid"-- his masked persona removes him from the rank and file of oater-heroes like Roy Rogers and the rest, irrespective as to whether the filmmakers do anything with the potential.  If I were basing my concept of the metaphenomenal on execution rather than potential, then I'd have to leave out not only inferior Durango Kid movies, but also badly executed SF-film like these two specimens.

BOTH BARRELS BLAZING, third in the series, offers a confused tale about the Durango Kid trying to find a cache of gold after the bandit who stole it-- apparently a holdover from the second film-- is killed.  The most notable thing about the story is its attempt to do a swipe on the classic "Lady for a Day" scenario as represented in Frank Capra's 1933 film-- though for all I know, there may have been earlier examples of the story.  An impoverished old prospector named "Grubstake" has lied to his long-absent daughter as to the extent of his wealth, but everyone in Durango's town resolves to go along with his pose as a rich man.  These scenes, however derivative, offer the only real entertainment in the film, apart from the comedy relief of Dub Taylor, making his first appearance as "Cannonball."  The film ends on a cheerful note even though salty old Grubstake is killed.

BLAZING THE WESTERN TRAIL, sixth in the series, is a decided improvement.  Here it's the old chestnut in which outlaws continually besiege a stagecoach company until it's near bankruptcy.  If I mention that there's another stagecoach company in town that isn't getting this kind of treatment, there shouldn't be any mystery as to the villain's identity.  The story proves a little more interesting in that the Durango Kid-- taking the name "Jeff" in this picture-- pretends to quarrel with his sidekick Tex in order to get in good with the bad stagecoach company.  The virtuous stagecoach company is run by an old man and his daughter, whom he "raised like a boy," though she never does anything more active than driving her coach.  She also provides some static, relentlessly criticizing Jeff for consorting with evildoers, who also murder her father.  On the comedy range, Dub Taylor has some cute moments trying to find a way to propose to his intended, so that in the end she's forced to maneuver him into popping the question.  I imagine she was gone by the next entry in the series, though.

The third and last Durango I viewed, TRAIL OF THE RUSTLERS, jumps forward quite a bit, to Number Forty-Three in the series of Sixty-Four, by which time Smiley Burnette had replaced Dub Taylor as the comedy relief, which I find to be no improvement.  This time the familiar plot is that of owlhoots seeking to gain control of all the land in the territory, to the extent that they willingly gun down the father of a young boy.  The crooks also have one of their number impersonate the Durango Kid, leading to a nice scene where the young boy gets the drop on the real hero, thinking that Durango has killed his father.  The murdered rancher also has an older daughter who doesn't do much of anything but provide the standard female lead.  This is a shame given that the actress, Gail Davis, would later garner a measure of sagebrush notoriety for playing TV's "Annie Oakley."  This time the only female character who gets a substantial role is the secret leader of the robber band, who pretends to be a solid citizen while ordering her gang to kill and plunder.  Smiley Burnette gets a few smile-worthy moments attempting to court the older woman.

Posted by Gene Phillips at 12:57 PM
Email ThisBlogThis!Share to TwitterShare to FacebookShare to Pinterest
Labels: combative adventures, outre outfits (u), the uncanny