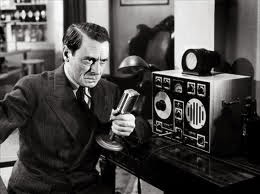 Though MYSTERIOUS DOCTOR SATAN doesn't quite reach the top of the hill alongside the best serials of William Witney and John English, like DRUMS OF FU MANCHU, it's a solid "B" entry in terms of the quality of the stuntwork and its main villain. Like DRUMS, this is a serial whose villain is the real star of the show.

This is somewhat ironic in that the original script was prepared by Republic Studios for a SUPERMAN serial, had it that studio been able to come to terms with DC Comics. One wonders how much of the familiar Superman mythology would have made it into the rough-and-ready action-template favored by Republic.  As it is, SATAN's substitute hero. "the Copperhead," seems closer to the model of Zorro, who was often succeeded by modern-day incarnations of the character.  In the first installment of the serial, protagonist Bob Wayne learns from his father-substitute Governor Bryson that Bob's true father had been a vigilante called the Copperhead. Bob is intially ashamed to learn that the father he never knew was an outlaw-- thus proving that Bob's a real straight-arrow-- but Bryson sets Bob right, informing the young man that vigilantism is OK when there's real evil to be opposed-- evil like the insidious world conqueror, Doctor Satan.

After this introductory chapter, the Copperhead becomes a pretty standard athletic Republic hero, capable of many fantastic stunts but with no great mythology of his own. In contrast, the evil Doctor Satan, as played by genre-veteran Eduardo Cianelli, outshines the rather routine gimmicks he's given to work with-- remote-control electrical devices that slay any rebellious henchmen, and a giant robot whom the Firesign Theater once dubbed "an enraged water heater."  Cianelli gives the evil doctor a brooding, forceful intelligence even though one never knows who Satan is or how he came to be a sinister mastermind.

But as noted before, Republic's specialty was fast action, and SATAN has it to spare, even though as is often the case the best cliffhanger-scenes occur in the earliest chapters.  In addition to the heroic strivings of star Robert Wilcox (or his stunt double), a few chapters also feature some horse-riding action by stunt-rider Dorothy Herbert, who gets some decent fighting-action.  This was Herbert's only cinematic appearance. 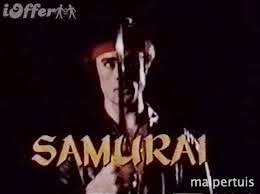 There's not much to say about the rejected TV-series pilot SAMURAI.  Lee Cantrell, son of an American businessman and a Japanese heir to the samurai tradition, decides to dress up in black togs-- but no mask whatever-- and fight crime on the mean streets of San Francisco.  He comes up against a corrupt industrialist who, for no clear reason, wants to unleash an earthquake with a special machine, whose presence pushes this potentially-uncanny martial-arts flick into the realm of the marvelous.

Stunts and dialogue-- particularly the lines dealing with Cantell's supposed "culture clash"-- are bland and unmemorable.  Joe Penny, a talented enough actor, is given nothing to work with and is unable to raise this mediocrity even to the level of a "so bad it's good" outing.
Posted by Gene Phillips at 3:45 PM
Email ThisBlogThis!Share to TwitterShare to FacebookShare to Pinterest
Labels: combative adventures, the marvelous, the uncanny