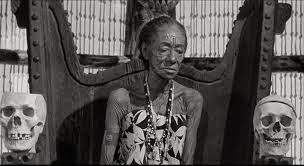 In my review of MONSTER ON THE CAMPUS, I remarked that I didn't think " the script would have been improved had [the character of ] Blake been more three-dimensional."  By that I meant that there's a special enjoyment one gets from seeing fantasy-concepts expressed through simple formulas, as opposed to the high literary treatment they might get in avowed classics like the original versions of FRANKENSTEIN and DR. JEKYLL AND MR. HYDE.

That said, some films are just too damn formulaic to offer even basic fun.  Such is the case with THE LEECH WOMAN, whose script-credits included a contribution from David Duncan, the scripter of MONSTER ON THE CAMPUS.  In contrast to CAMPUS, LEECH is a more direct meditation on the Jekyll-Hyde theme, for the 1960 film does include a character who chooses to become a monster.  Most adaptations of the Stevenson story don't dwell on the author's observation that Hyde is positively younger than Jekyll, but this is a prime consideration in LEECH WOMAN.

The film begins with two positively unlikeable characters: endocrinologist Paul Talbot and his badly-aging, alcoholic wife June.  After a scene in Paul's lab to establish their state of mutual marital detestation, Paul receives a visitor: an ancient African woman, Malla.  Malla promises that she can show Paul the secret of age-retardation, hidden in a rare African plant, if he gives her enough money to return to her tribe, the Nandos.  To further intrigue Paul, Malla tells him that the Nandos control a process by which age can be positively reversed.  Paul doesn't know whether or not to believe her on this score, but the age-retardant works.  Thanks to the money Paul gives her, Malla hops a flight to Darkest Africa. Paul decides to follow in order to learn more about the Nando rituals.  But he needs June's money to make the trip, so he sweet-talks her into joining the expedition.  Later she finds out that he's deceived her, and she's less than pleased.

Suffice to say: Paul's group is captured by the Nandos.  The whites learn that the de-aging ritual is real, though the Nandos only allow it to be used for the very old as a gesture, allowing the de-aged one last taste of youth before they end their lives.  Presumably this ritual explains why the small tribe isn't made up of de-aged nonagenerians.  However, to make the de-aging drug work, the medicine man must drain a living subject of his pituitary gland-secretion.  A prisoner dies so that Malla may enjoy a brief recovery of her youth.  Meanwhile, June-- who knows the Nandos are going to kill all of the intruders-- persuades Malla to allow her to de-age, using Paul for the sacrifice.  Then, her youth temporarily restored, June and her guide escape.  But on the way back to civilization, June needs a refresher-youthification, and she ends up killing her guide for it.

From then on LEECH WOMAN follows a fairly set pattern.  Back in the U.S., Young June masquerades as her own niece, and successfully vamps her husband's lawyer, who couldn't even see Old June as a woman.  But June must keep killing all over and over, including her husband's nosy secretary, who happens to be in love with the young lawyer.  Eventually June's secret comes out and she dies a predictable death.

It seems unlikely that this film is a swipe from Roger Corman's slightly earlier WASP WOMAN, given that the production-times of each film are so close to one another.  The Corman film follows the same basic "Hyde-on-the-loose" structure, applied to a woman's need to find the Fountain of Youth.  But the characters, though just as simple, are much more engaging.  One never feels much sympathy or dislike for the Leech Woman, for Duncan's script merely follows the Jekyll-Hyde formula in the most perfunctory fashion. 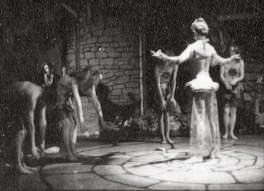 CULT OF THE COBRA isn't a Jekyll-Hyde story, but provides the rationale for its serial murders through another trope: that of the offended deity striking down the profane.  COBRA has some of the same pacing and characterization problems as LEECH WOMAN. and the "Cobra Woman" of the story doesn't come anywhere near entering the pantheon of great Universal monsters.  Still even though the director and the three credited writers were neophytes in the practice of fantasy-films,
COBRA edges a little closer to the realm of the mythopoeic sources of great horror.

The film starts in 1945, with six American GIs stationed in a part of "Asia," presumably India or some nation where the natives wear Indian attire.  All six are scheduled to end their tours of duty at the same time and to return to the U.S.  Though one of the soldiers, Paul by name, is sincerely interested in Asian customs, the others are all raucous and irreverent, particularly group-Lothario Carl, who calls out an offer of marriage to a random sari-clad girl on the street.  This minor action suggests a textual reason to set the film so close to World War II, for one of the cultural results of the Second World War was that of the "war bride."  There had been war brides in many eras other than that of WWII, but perhaps because American soldiers traveled to so many different climes, the topic engendered far more films on the topic after WWII than after the First World War.  In any case, though the sari-clad woman doesn't take Carl up on his facetious-- and disrespectful-- offer, the GIs provoke feminine vengeance in another form.

Searching for some big tourist-experience before they return home, the six soldiers encounter a snake-charmer who is willing to take their money and let them witness the rare and sacred ritual of "the Lamians," a small tribe of Asians who claim the ability to change into serpents.  The snake-charmer successfully smuggles the six disguised Americans into the secret ritual, but warns them not to draw attention to themselves.  There follows a ritual in which a lithe female performer mimes the act of killing an enemy by coiling around him and biting him to death.  But the dumbest of the GIs decides that he wants photographic evidence to show off in his slide-shows.  He gives them away, and the soldiers must flee for their lives.  Unbeknownst to five of the six, the mysterious female performer pursues Nick and gives him a poisonous bite.  Nick's friends find him and take him to a hospital, but this proves no more than a stopgap.  The Cobra Woman, this time assuming cobra-form, insinuates herself into the hospital and bites Nick to death.

The other GIs return to the U.S., only slightly chastened by Nick's death, and return to their regular lives.  However, a romantic complication opens the group up to new infiltration, for once they're all back on American soil, Paul reveals to his buddy Tom that he Paul has proposed marriage to Tom's actress-girlfriend Julia, and that she's accepted.  It's not clear when this big romantic reversal developed; usually this sort of "Dear John" outcome takes place because the girlfriend gets seduced by a stateside Romeo.  Tom takes the rejection badly but tries to deal with it.  Then a lissome new neighbor moves into Tom's building.  It's none other than the Cobra Woman herself, calling herself by the very un-Asian name "Lisa Moya."  She inveigles Tom into a romance while continuing to stalk his buddies in her serpentine form.

Though COBRA's setup is good, the latter half succumbs to tedium.  Aside from Paul, the rest of the GIs are flat stereotypes, so that their deaths arouse little identification, and the Paul-Tom-Julia conflict peters out quickly.  The cobra-transformations, when they are even on-screen, are handled as simple dissolves and give no real frissons, any more than does her snake-form.  Director Francis D. Lyon sometimes evoke a Lewton-esque quality to Lisa's stalkings, but the aura of menace is not steadily maintained.

The weakest element is the one that should have been the strongest: the monster.  Lisa Moya has the potential to be an avenger of her insulted culture-- and its women-- but the potential is unrealized because the script fails to grapple with the failings of the all-American protagonists.  Her incredibly easy assimilation into American culture-- giving no hint of her origins-- could have been used to suggest the ability of the alien intruder to masquerade as "one of us."  Instead, Lisa's lack of cultural indications-- her clothes, her accent, her awareness of America's customs-- merely seems to be laziness on the part of the scripters.  Worst of all, the audience never knows exactly what Lisa is.  Her shapeshifting ability confirms that at least some Lamians can change into snakes, but why does she alone pursue the infidels?  Is she the only one who can do so? If so, why doesn't she at least have some fellow cult-members along for backup?  Yet even these inconsistencies could be ignored, if Lisa had been given a consistent emotional core.  But the script gives actress Faith Domergue nothing to work off emotionally, so she simply plays the mysterious exotic most of the time, aside from a moment or two suggesting that she might weaken toward her target Tom.

In conclusion, COBRA doesn't (to mix metaphors) get all of its ducks in a row.  But at least, unlike LEECH WOMAN, it has some ducks to start with.
Posted by Gene Phillips at 2:56 PM
Email ThisBlogThis!Share to TwitterShare to FacebookShare to Pinterest
Labels: the marvelous