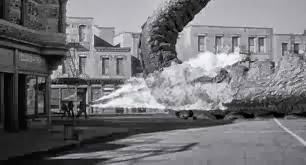 
IT CAME FROM BENEATH THE SEA (henceforth IT for short) follows the general American model for giant city-crushing monsters supplied by 1953's THE BEAST FROM 20,000 FATHOMS.  Though BEAST's Rhedosaurus had more visual personality than the "sixtopus" of IT, the latter film benefits from a better script, credited in part to George Worthing Yates, who racked up about a dozen SF-film credits in that decade.  In both films Ray Harryhausen shines-- as always-- in his animation of the respective monsters, and if anything "It" seems the more formidable opponent, being able to resort to the concealing waters of the ocean more ably than the big dino.  The scene in which soldiers repel It's gargantuan tentacles with flamethrowers is to my mind much more enjoyable than the often excerpted scene in which the great cephalopod hauls himself up on the Golden Gate Bridge.

Perhaps because the octopus spends so much time under the water, the script is obliged to beef up the dialogue of the creature's human opponents.  The foremost of these is naval submarine commander Pete Matthews, whose vessel encounters the giant beast during maneuvers.  The initial voiceover even frames the encounter as a showdown of sorts, in that the nuclear sub represents one of the finest achievements of modern mankind, and the hostile sea-monster exists to challenge its supremacy.  "The mind of man had thought of everything - except that which was beyond his comprehension!"

Matthews and his sub-mates manage to escape the creature's grip, though Matthews is rather mournful that the ship held no torpedos.  Like the gunfighter deprived of the chance for a fair fight, Matthews will get a chance to redeem himself later.  In a rather peremptory fashion Matthews uses the authority of the Navy to draft two civilians to examine the sub for evidence of the oceanic opponent.  One of the scientists is an older man, coincidentally sharing the name of Edgar Rice Burroughs' monster-fighting hero, "John Carter."  The other scientist, a colleague to Carter, is Lesley "two-girls'-names-in-one" Joyce, a highly trained female professional whose presence provokes Matthews to assert his dominance.  BEAST tossed in a romantic relationship between two scientists, played by the male and female leads, while the female had a vaguely paternal colleague off to the side.  Yates' script shakes up this pattern a little by mixing the military man with the "new breed of woman."  In addition, there's a slight suggestion that Joyce may have some interest in the older Carter, though Carter is blissfully unaware of any such attention, or of Matthews' initial looks of jealousy.

The "dueling romance" schtick in IT was far from new in 1955, but Yates has some fun with it, and keeps it from becoming entirely predictable.  Initially Matthews seems so overbearing that Joyce's eventual affection for him seems to come out of left field, though Yates may've meant to suggest that her response to his masculine assertiveness was inevitable for even a "new breed of woman."  But Joyce does get some of her own back at times, and after It has been defeated, the film ends with Joyce showing a certain assertiveness about "taking possession" of Matthews.

Some 1950s films present Oedipal oppositions between younger and older men for a young female, as seen in 1953's CAT WOMEN OF THE MOON and 1956's FORBIDDEN PLANET. Usually these contests don't end too well for the older male.  In IT, not only is Carter not aware of any possible conflict, he risks his life to save Matthews from the monster, attacking the six-armed terror in its Cyclopean eye-- with the result that all three protagonists live to enjoy their coffee after the monster dies.

In contrast to BEAST's Japanese imitator Godzilla, It never has any personality, and the scientists' discussions of its nature treat the octopus pretty much like a predictable "thing."  Like the ants of THEM!, the sixtopus is not a prehistoric critter, but has been suffused with atomic-bomb radiation, forcing it to leave the ocean depths to look for new food-sources.  But the creature's problems are never addressed with any conservationist compassion, and no one suggests for a moment that it might be corraled somehow.  Sadly, just like Jaws, "no one cry when It die."

I should also note that IT is almost a corrective to the species of cautionary, anti-atomic SF-films.  IT's message is almost more celebratory in tone: "Well, if our atomic tests happen to bring forth rampaging monsters, bring 'em on and we'll cut 'em down!"
Posted by Gene Phillips at 1:57 PM
Email ThisBlogThis!Share to TwitterShare to FacebookShare to Pinterest
Labels: combative dramas, the marvelous