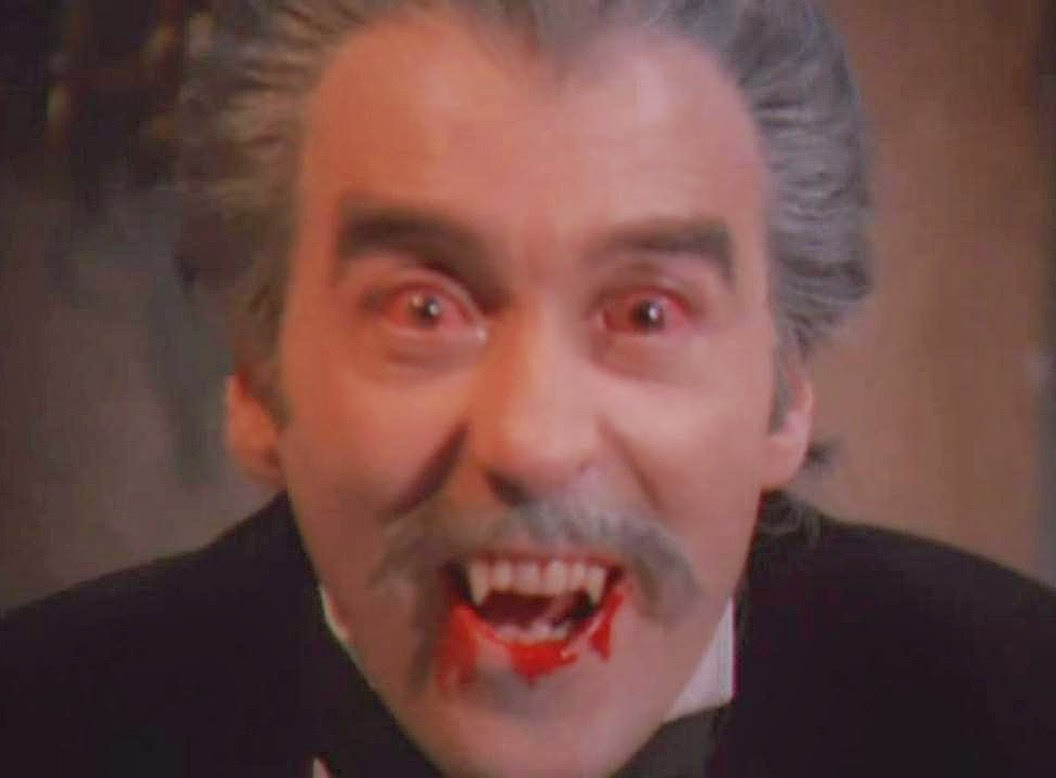 
At the beginning of Jess Franco's COUNT DRACULA there's a short intro that claims that the film will adapt Bram Stoker's novel "exactly" as written. Perhaps it's not surprising that filmmakers would fib for the sake of publicity, but I'm amazed that a few fan-critics have agreed with this assertion.  For the record, COUNT DRACULA may use more of the novel's plot structure than either the 1931 classic or 1958's HORROR OF DRACULA.  But the Franco version is just as cavalier about condensing or switching around characters-- to less good effect than those previous Stoker-adaptations.

Like the majority of the films in the Hammer Studios "Dracula" series, the king-vampire is played by Christopher Lee. Lee sometimes phoned in the Dracula role in some of the lesser Hammer entries, and aside from the actor's opening scenes, COUNT DRACULA is about on the level of weak efforts like DRACULA A.D. 1972. The opening scenes also display director Franco using his much-loved zoom lens to best effect, to capture the eerie tension of Jonathan Harker's journey to Castle Dracula.  But it's all downhill after this.

One of the few changes that resonates well is that after Jonathan Harker escapes the castle, he's found by Transylvanian authorities and shipped back to his native England-- but because he makes the mistake of telling his fantastic story, Harker ends up in an asylum; the same one that, in the novel, just happens to be within spitting-distance of Dracula's English hideaway.  In addition, Dracula's nemesis Van Helsing (Herbert Lom), who in the novel is called in for a consultation, is the asylum's administrator, while Doctor Seward, who held that post in the novel, is demoted to a staff physician, whose role is largely confined to his interaction with the inmate Renfield.

The two friends Mina and Lucy are still in the story, and Mina is at least still affianced to Harker, in contrast to the turnabout of the girls' roles in HORROR OF DRACULA.  Lucy, however, does not have three suitors; Arthur Holmwood is written out and Quincey Morris is Lucy's bethrothed. Van Helsing does not initially seem to believe Harker's story, but he comes around quickly when Lucy Westenra begins to suffer a mysterious blood-loss.

One of the most interesting twists-- one which could have been exploited to good effect-- is that Van Helsing recognizes the vampire phenomenon because he's been researching black magic for years. Why? Because he became interested in the subject after Renfield (Klaus Kinski) became his patient. This version of Renfield, unlike the one from the novel, has been to Transylvania like the Renfield of the 1931 film. But this Renfield, who traveled in the company of his daughter, was simply a victim of the vampire's predations: the daughter died-- or possibly became one of Dracula's wives-- and Renfield went insane. Renfield doesn't really have much to do in Franco's tale: as in the novel Mina tries to reach out to him, but the madman almost strangles her. But I can imagine a situation in which Van Helsing might have been more involved in treating Renfield, perhaps using him to track down the vampire-lord.

Unfortunately, even though Franco selects a handful of scenes from the novel, none of them maintain much tension. The actors are partly to blame, for most of them, aside from Herbert Lom, give bland performances-- but not even the best actor could pull off Franco's most idiotic scene. In it, three of Van Helsing' vampire hunters-- Seward, Morris, and Harker-- invade Dracula's lair, where his coffin is guarded by-- a bunch of stuffed animals? I guess Franco envied the novel's ability to have the villain conjure up troops of wolves or rats at a moment's notice, and since the director's budget didn't allow for such spectacle, he decided to go with a bunch of taxidermy victims. I don't even think the scene even works as self-indulgent cinema.

As in the novel the vampire flees England for Transylvania, and his hunters pursue him. Franco doesn't come anywhere near the excitement of the final confrontation, either in the novel or in superior renditions like BRAM STOKER'S DRACULA. The hunters' defeat of Dracula's gypsy minions and their execution of the vampire are both listless affairs, so that unlike the novel and some of its translations, COUNT DRACULA proves to be a work in the subcombative mode.

Posted by Gene Phillips at 2:33 PM
Email ThisBlogThis!Share to TwitterShare to FacebookShare to Pinterest
Labels: the marvelous