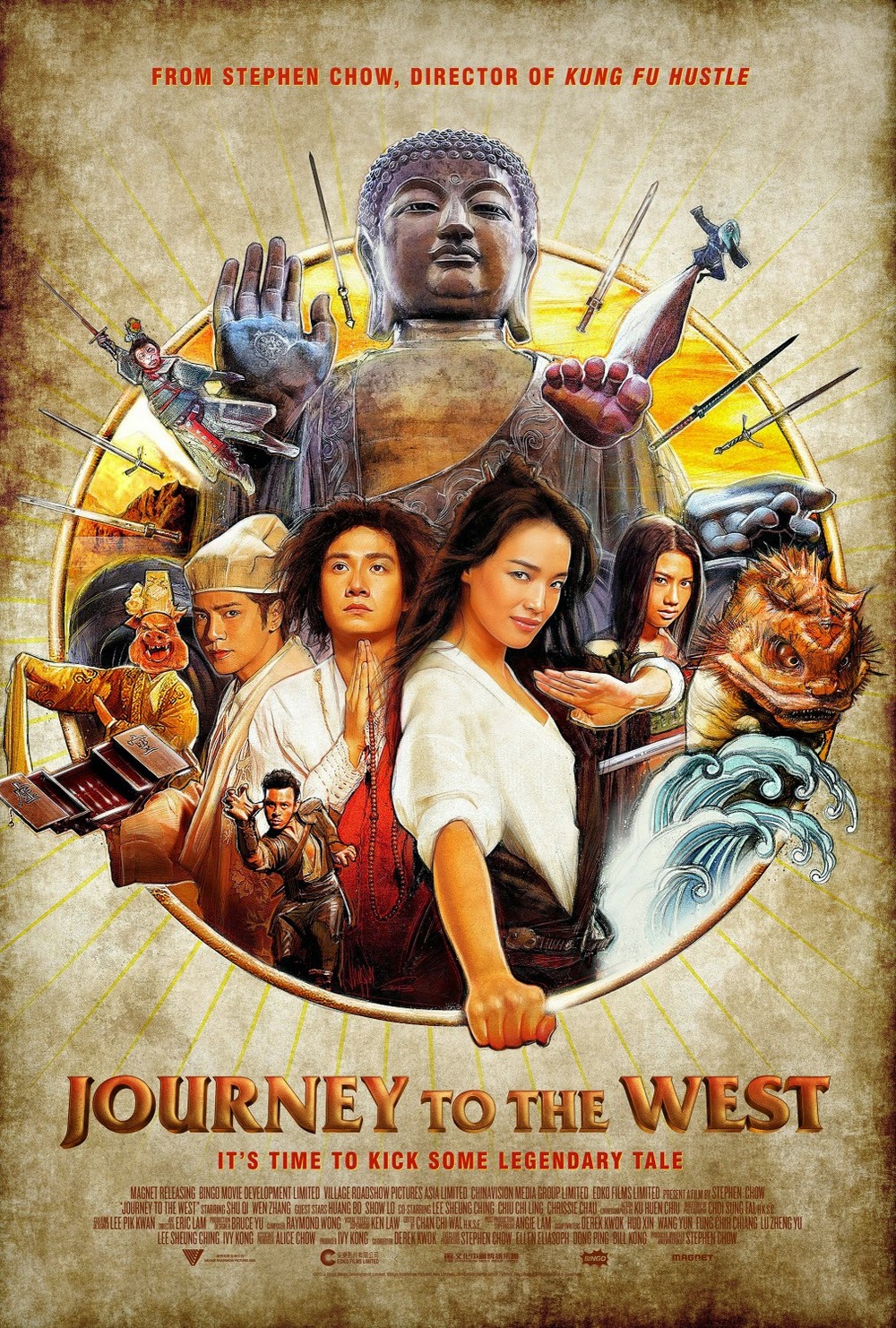 
I had to give a lot of thought as to how to classify Stephen Chow's looney, often anachronistic take on the classic 16th-century Chinese novel JOURNEY TO THE WEST.  In the original novel, a devout Buddhist priest journeys from Tang-era China to India in order to secure a collection of precious sutras and to bring them back to China. According to Wikipedia most of the adventures of the priest-- in the film given the name Xuan Zang-- and his magical bodyguards take place on the way to India. Chow's JOURNEY focuses only on the early life of Xuan Zang, when he is a young Buddhist demon-hunter, but one with a naive belief that he can reform demons by reading nursery rhymes to them. This is probably nothing like the original priest's early history, and certainly the available summaries emphasize not demon-hunting but Xuan Jang's quest on behalf of Buddhism.

The priest isn't only naive about demons; he also understands nothing about women, and out of foolish pride he rejects a more experienced female demon-hunter, Duan (Shu Qi) when she falls in love with him. The association of Xuan Zang and Duan leads them into many exploits of demon-hunting, particularly against cannibalistic pig-demons, whose leader is given the comic name "K.L. Hog" (Killer Hog?)  The climax involves the rash young priest releasing Sun, the mercurial and deadly Monkey King, from the prison to which the original Buddha condemned him for the past 500 years. In the novel, Monkey is released so that he will be tamed and enlisted to help Xuan Zang collect the sutras, but in Stephen Chow's script, the mission of the sutras doesn't come about until after Monkey is released.

My various comparisons with the novel are not meant to suggest that Chow misleads anyone in his audience into thinking he'll deliver a sober-faced rendition of the original work. By the time Chow has finished the opening sequence, which deals with Xuan Zang's attempt to "demon-bust" a murderous fish-demon, it's clear that the director is delivering an all-stops-pulled-out Hollywood-esque exercise in kinetic showmanship. It's in this sequence that Xuan Zang first tries to pacify a demon through the use of Chinese nursery rhymes, which naturally does not end well for the young man. Duan arrives on the scene and promptly beats the demon to death with her fists. She becomes piqued by Xuan Zang's resistance to her charms, and when they cross paths again, both hunting down the leader of the cannibal pig-men, she determines to pursue him.

This theme by itself-- a woman's aggressive pursuit of an unwilling man-- should signal that the film will be an all-out comedy. And certainly the middle section of the film is replete with many farcical sequences. Duan and her fellow martial demon-hunters (one of whom is called "Fist of the North Star," after a famous manga hero) have a wagon that can be propelled sans horses, because inside is a ludicrous air-filled balloon that makes the wagon shoot forward every time the balloon is whacked with big hammers. Duan uses her friends to attempt fooling the priest into sleeping with her. Duan, deciding that she needs to act in a more feminine manner to snare Xuan Zang, gets a female friend to use magic so that she Duan will "mimic" the friend's actions-- and of course, the wrong actions get mimicked.

Yet the third part of the film begins the downfall of the traditional boy-girl plot. On the advice of his mentor, Xuan Zang journeys to the prison of the Monkey King in order to employ the latter's powers against the pig-demons. This sequence starts out comically, for when the priest first meets the simian demon, he looks like a wizened old man. Monkey even gets Duan to dance with him, much to Xuan Zang's displeasure.

But once Xuan Zang releases Monkey, the funny little man becomes a malicious, egotistical demon, and he smashes down all of Duan's demon-hunters. Even some of these fight-scenes contain farce-elements, particularly since one of Monkey's challengers is a monk whose power is to make one of his feet grow to titanic size. But the comedy vanishes when Monkey kills Duan. This, ironically, causes the grieving Xuan Zang to realize his own Buddha-hood, and he attains a level of power that allows to chastise Monkey in a show-stopping fashion.  Following this, Xuan Zang goes on to accept the sutra-mission, taking with him his three most iconic helpers: a pig-demon, a river-demon, and the now tamed Monkey.

I've discoursed on the storyline in detail to indicate why I think that JOURNEY is more of a drama than a comedy. It's not simply that it has a sobering ending, but rather, because all the jubilative scenes are subordinate to the main point of the plot. This main point is not jubilative but purgative in nature. Xuan Zang, since he is destined to be a priest, must be purged of his desire for Duan, and this, in the formulations of Northrop Frye as I have read him, aligns JOURNEY with the mythos of drama.

This isn't to say that a drama must end tragically: even Aristotle stated the contrary. SLEEPING BEAUTY is a notable film that I categorize as a drama, not because it ends sadly, but it does so by emphasizing the purgation of evil, in the form of Maleficent, more than it does the heroic triumph of Prince Philip. SLEEPING BEAUTY, like JOURNEY, contains many farcical scenes, but the presence of these is also subordinate to the dramatic resolution of the romance-plot. In similar fashion GUARDIANS OF THE GALAXY is also replete with numerous comedic material, but at its core it does emphasize an invigorating heroic triumph, and so it qualifies for the mythos of adventure. Finally, THE TENTH VICTIM is another film with a number of funny sequences, but the main point of its plot centers upon the mortificative mood of the irony, even though, as in SLEEPING BEAUTY, the romance does succeed despite the rest of the world going to hell.


Posted by Gene Phillips at 2:55 PM
Email ThisBlogThis!Share to TwitterShare to FacebookShare to Pinterest
Labels: combative dramas, the marvelous