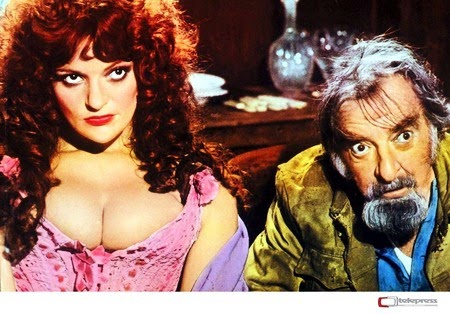 
The job of the actor is not enviable. On one hand, to survive in "show business" one must believe passionately that one has something worth showing, enough that others should be willing to pay for the privilege of seeing the show. On the other hand, the actor must be willing, for the most part, to subsume his or her own personality into that of characters created to serve specific effects in stories that are greater than any single actor's contribution to it.

I said "for the most part" because every once in a while I encounter a film that looks like as if everyone involved just decided to have a high old time, regardless as to how much they might be entertaining the audience. One such film is the 1991 film THE MARRYING MAN, which seemed to be devoted to showing how much fun it was for Kim Basinger and Alec Baldwin to be humping one another.  Yet that film is a work of genius next to Paul Morrissey's 1978 HOUND OF THE BASKERVILLES.

The famous Conan Doyle story is so familiar that it certainly has rich potential for a comic take-off. Yet, even though the script-- for which Morrissey shares credit with stars Peter Cook and Dudley Moore-- shows a strong familiarity with the Doyle original, the writers neglect to translate the rich original drama into rich comedy. Instead, what one gets is a series of aimless, unfunny skits. I can toss out all manner of possible reasons as to why the script turned out so poorly. Maybe Cook and Moore couldn't work well playing off a set script, being better suited to approach a looser structure, like the "devil's bargain" trope that informs their best film-script, 1967's BEDAZZLED. Or maybe they thought they had to compete with the wilder excesses of Monty Python, which had scored a big box-office three years before with MONTY PYTHON AND THE HOLY GRAIL.

Yet the impression I take away from HOUND-- admittedly, the cut American version-- is that of a bunch of actors having fun doing goofy routines without much rhyme or reason-- and certainly without any concern for entertaining an audience. For instance, the film fiddles around with a seance at Baskerville Hall-- a scene created for the 1939 HOUND adaptation-- but instead of doing the utmost to get comic effect out of a seance, the film veers into EXORCIST territory, roughly five years after that film was on peoples' minds.  This scene barely relates to the plot at all, but it does make the 1978 HOUND one of the few adaptations that actually has a supernatural entity in it, making it "marvelous" in phenomenality though not in quality.

Once or twice there are slight suggestions of content that might have been played to good effect, as when Sir Baskerville talks about all the "strange couples" that are either at Baskerville Hall or in neighboring abodes.  A good comic take on HOUND could've built this into a poke at the tendency of "old dark mansion" stories to be freighted with loads of dysfunctional couples.  But it's just a throwaway line. The only thing I enjoyed in the whole tedious flick was a scene in which busty Dana Gillespie (seen above) gets Dudley Moore in a boob-alicious headlock-- and that was a pretty lousy pay-off for eighty minutes I'll never get back.
Posted by Gene Phillips at 3:31 PM
Email ThisBlogThis!Share to TwitterShare to FacebookShare to Pinterest
Labels: the marvelous