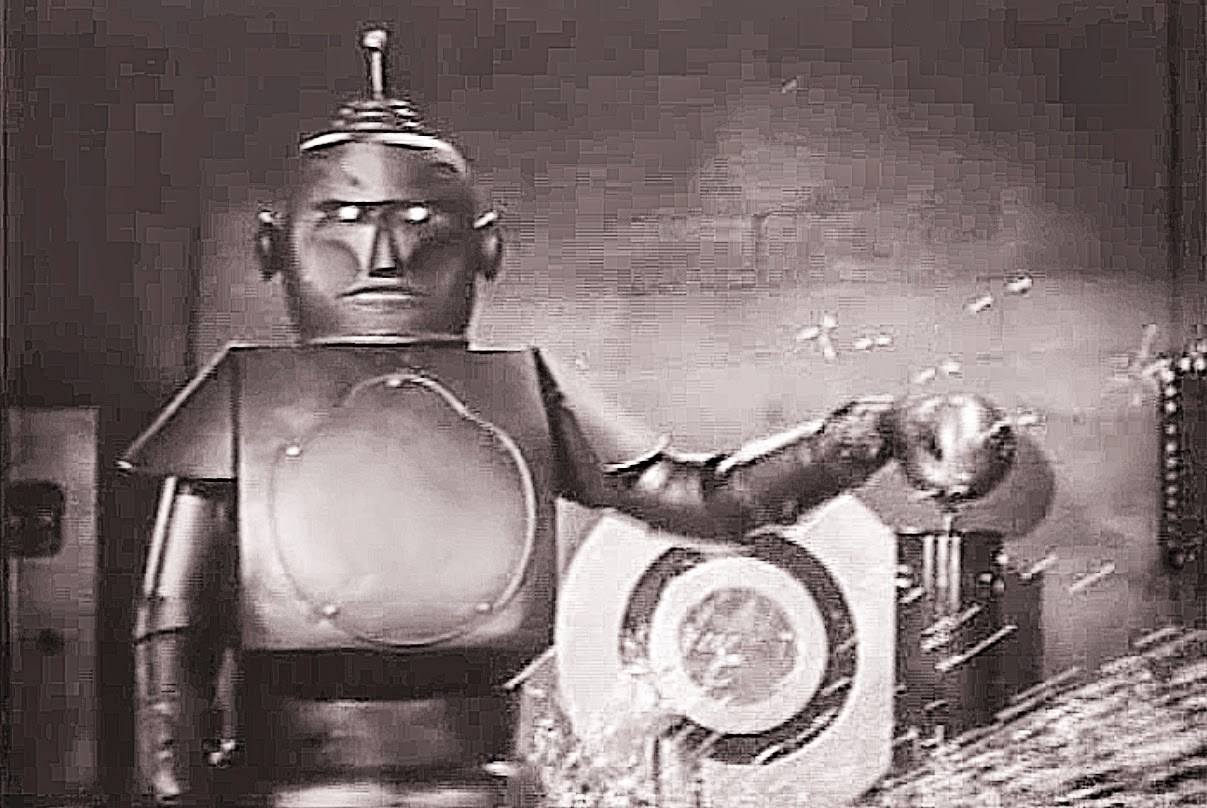 
Here's a pair of ape-horror films from the forties, although the first of these, a 1945 Columbia serial, also shares time with a "monster," i.e., the robot seen above, known as "the Metalogen Man."

THE MONSTER AND THE APE (henceforth just "APE") is something of a switch-around with a long established serial-trope. Many SF-oriented serials of the 1930s and 1940s displayed a fascination with big clunky robots. Such primitive effects were probably not especially expensive, beyond the original design of  each robot, given that they were all men in suits, but I would guess that they were time-consuming to film. That may be the reason why in most SF-serials-- including this one-- the robot is used sparingly.  However, long-time western director Howard Bretherton and his scripters-- both of whom had worked on many more serials than Bretheron had-- found a way to give their juvenile patrons a little more bang for the buck: they gave their villain a trained ape. Thus the evil Doctor Ernst --surely one of the least imposing villain-names in serials-- has one inhuman servant already working for him while he strives to steal another one, the Metalogen Man, from its creators.

Like many scientists of this period the robot's creators have altruistic motives: they want their Metalogen Man to liberate humankind from hard labor. Doctor Ernst wants the Metalogen Man for criminal purposes, and early in APE he claims to be one of its inventors, though the script drops that particular ball later on. After Ernst has his killer gorilla Thor (Ray Corrigan) knock off most of the robot's makers, the surviving scientist Dr. Arnold and his daughter Babs call in an engineer from another foundation-- Ken Morgan, who for all intents and purposes acts like your basic cop/ FBI bloodhound.  The plot is driven the same way most serials are: "find a vital part for the robot," "find a source of energy for the robot," and so on.

Often the villain outshines the hero in serials, but not here. Though George Macready would prove a highly watchable performer in other films, he's merely efficient as a robot-stealing mad scientist, lacking the intensity of Eduardo Cianelli playing a similar fiend in 1940's MYSTERIOUS DOCTOR SATAN. Nevertheless, he's clearly more the narrative focus than the bland Morgan (Robert Lowery of BATMAN fame). Lowery acquits himself well in the serial's numerous punch-ups, and he plays almost a lone hand, with only minor assistance from Arnold, his daughter, and his black chauffeur/comedy relief Flash.

Flash, essayed by Willie Best, is just about the only reason I rated the symbolism of this well-shot but routine adventure-serial as "fair" rather than "poor."  Best didn't regularly do serials, and although many of his routines conform to the general outline of the "scaredycat Negro" popular at the time, I see some evidence that he may have interpolated some bits of business that he originated, since said bits don't resemble much of anything in the other serials by the credited scripters. "Flash," of course, is an ironic reference to the notion that black people are all lazy, but the character does show a modicum of gumption. In an early chapter Morgan has Flash drive him to the crooks' suspected hideout, and leaves the chauffeur outside while he, the two-fisted engineer, investigates.  Morgan of course gets into a fight with the hoods, wrestling with one over a pistol. When the gun goes off, Flash reluctantly goes to Morgan's aid, wielding that stereotypical "Negro weapon," a straight-razor. He and Morgan are knocked out and left behind, but things work out so that the local cops check out the scene and find only Flash with his razor.  Later he complains about being grilled by the cops, making one wonder why none of the heroes found time to go bail him out.  Also, though Flash is skittish of the robot, and jumps whenever he thinks it moves, he does gain a little skill in operating it-- though his triumph is dimmed when Ernst takes over the robot by remote control. 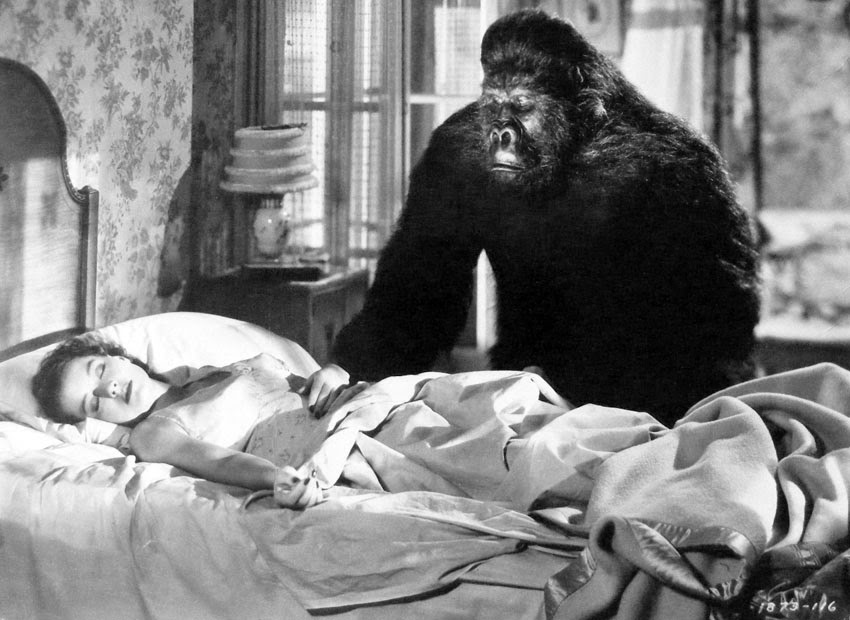 THE MONSTER AND THE GIRL (henceforth "GIRL") is a more dramatic,er, bunch of bananas. Moreover, the "monster" of the title isn't just an ordinary trained ape like the one from the serial.

He starts as an ordinary man, Scot Webster, protesting his innocence at a murder trial. He won't give the court the full story, though, so his sister Susan steps forward. In a rather complicated scenario, Susan was suckered into a criminal life (implicitly, a sort of white-slavery prostitution racket) by a heartbreaker who romanced her and turned her over to his cronies. Scot gets in the faces of the racketeers, and they, rather than just killing him and dumping the body, elect to follow a more complicated scheme, framing Scot for murder. The jury doesn't believe Susan's impassioned narrative and sentences Scot to death.

However, though Scot goes to Death Row, he receives succor from an unlikely source: quirky scientist Doctor Parry (genre fave George Zucco). Parry can't save Scot's body, but he'll preserve his brain after death, by sticking it in the body of a gorilla. Scot doesn't get much of an explanation as to what sort of experimental evidence this is supposed to yield, but with the "undiscovered country" staring him in the face, he gives the mad doctor permission.

The results are better than Scot could have hoped: the transplant succeeds, and Scot finds himself in a body of a powerful, agile primate. Scot escapes Parry and goes on a rampage, using his inhuman strength and skill to seek out the racketeers and execute them one by one.  I should note that the actor in the gorilla suit, Charles Gemora, gives a particular pathos to his performance that's rarely seen in "man-in-gorilla-suit" films.

While the film's first half feels like a downbeat film noir, the second half takes unquestioned joy in seeing each of the scumbags tracked down and snuffed out by their nemesis.  To provide continuity with his old life, Gorilla-Scot is recognized not by his sister Susan but by his little dog, who provides a mute Greek chorus, accompanying the ape-monster until the final confrontation, when Scot destroys his last targets but pays the tragic price. The dog's final reaction is expected, and yet effective because the script keeps the canine's interactions with the ape-man minimal.

Just to touch on the film's psychological content: the idea of a small-town girl being "ruined" by a city-slicker and avenged by her loving brother has always suggested Freudian overtones to me, as if to suggest that she errs by getting too far from kith and kin. GIRL solves the possible brother-sister incest-angle by bringing in a more respectable suitor for Susan: a newspaper reporter covering the murder trial, who befriends Susan and remains with her despite her checkered past.

Posted by Gene Phillips at 3:32 PM
Email ThisBlogThis!Share to TwitterShare to FacebookShare to Pinterest
Labels: combative adventures, the marvelous