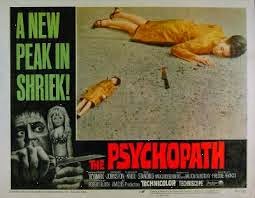 
In reading up on STRAIT-JACKET, I often saw it described as a "B-movie."  In terms of the film's production values, I don't doubt that it qualifies. However, a number of reviewers used the term to connote "something you don't expect to be good in the first place."  As I would hope my review made clear, I think the film had some though not all of the same symbolic resonance as its partial model PSYCHO, making it better than a huge number of more expensive "A" pictures.

Freddie Francis' 1966 PSYCHOPATH is closer to being a B-picture that justifies that putdown. Like JACKET it's made on a budget, and PSYCHOPATH also presents only two viable suspects for a rash of serial murders. But there really isn't much to the story beyond watching the murders unfold while slow-moving Inspector Holloway (Patrick Wymark) takes his time to investigate.

At the first crime-scene the murderer leaves a doll made in the image of the victim. Holloway finds his way to the friends of the victim, all of whom were members of a German war crimes commission. The inspector's investigation of the doll leads him to a dotty old woman, Mrs. Von Sturm (Margaret Johnson) and her protective adult son Mark. Mrs, Von Sturm's house is filled with dolls, making it pretty obvious that either she or her son is the killer, but Holloway takes no action to have them or their house watched by London cops.  The old lady may seem the less likely candidate as she's confined to a wheelchair, but Holloway's interview with her doctor establishes that her injury is only psychological and thus not a real alibi at all. The howling obviousness of this declaration makes it hard to believe that it was written by the same Robert Bloch who penned STRAIT-JACKET two years previous.

The reason for Holloway's phlegmatic detection is obvious as well: it's suggested early on that the four men targeted were indirectly responsible for causing the death of a man they sent to prison, the husband of Mrs. Von Sturm. Thus the audience is given every reason to want to see them knocked off.  Each death at least uses a different tool-- a noose, a blowtorch, etc.-- though none of the murder-methods are exotic enough to have raised the blush of envy on Dario Argento's cheek.

The one psychological touch that is interesting-- and goes undeveloped-- is a parallel between Mark, dominated by his clingy, maybe-crippled mother, and the innocent female viewpoint-character Louise, who's similarly under the thumb of a parent: her father, who tries to discourage her marriage to a suitable young man. But Bloch and director Francis leave this kernel unpopped. If one doesn't guess the murderer after the doctor's declaration, one would have to be pretty dense not to get it when the killer cuts down one victim not associated with the German commission: a pretty young girl who makes the mistake of showing interest in Mark Von Sturm. 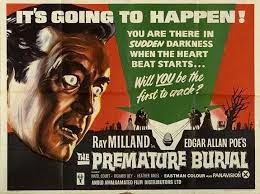 Roger Corman's THE PREMATURE BURIAL looks a lot more opulent than PSYCHOPATH, but it's even less well-developed in terms of narrative and symbolism.  Although scripters Ray Russell and Charles Beaumont are renowned for a respectable number of quality metaphenomenal works in film and television, BURIAL seems to be nothing more than a sterile regurgitation of narrative tropes borrowed from the Corman-Matheson Poe-film from the previous year, PIT AND THE PENDULUM.


Matheson's script, which had nearly nothing to do with the original Poe story, focused on a central character, played by Vincent Price, who was consumed and destroyed by his heritage, in part due to a conniving wife. The Beaumont-Russell script at least bears a thematic resemblance to Poe's "Burial" story, in that Poe's protagonist has to overcome his morbid fear of being buried alive. BURIAL's Guy Carrell (Ray MIlland) has a similar meaningful epiphany, but it occurs in the middle of the film when he thinks he's put his irrational fear behind him. In contrast to the prose-character, who overcomes his fear after being comically embarrassed, Carrell transcends his fear with the help of an apparently loyal wife.  Then, of course, there begin all the "phantasmal figurations" that are meant to send him to his doom, but end up backfiring on the plotters-- just like in PIT AND THE PENDULUM.

Some reviewers have wished that Vincent Price could have essayed the role of Carrell, but I think it would have made the resemblances to PENDULUM all the more glaring. Milland is perfectly fine in the role, bringing what I'll term a "calm twitchiness" to the part, in contrast to Price's stylized seriousness.  Milland is particularly good in the film's best scene, where Carrell outlines to his horrified listeners the many devices in his custom-built burial vault-- devices to keep him alive if he should be buried while still technically alive-- and one device he can use to meet death quickly, if no one comes to rescue him. Daniel Haller's art direction makes BURIAL look great, though I imagine the penny-pinching Corman didn't spend a dime more than he had to. Fortunately, Beaumont would do much better in Corman's later Poe-outings, HAUNTED PALACE and MASQUE OF THE RED DEATH, while Corman, Russell and Milland would enjoy a solid, non-derivative winner with 1963's X-THE MAN WITH X-RAY EYES.

In passing I'll note that the role of the sister, who doesn't want her brother to marry Hazel Court's character, suggested to me a slight incest-vibe. But even if this was intentional, it remained undeveloped.

Posted by Gene Phillips at 3:23 PM
Email ThisBlogThis!Share to TwitterShare to FacebookShare to Pinterest
Labels: bizarre crimes (u), perilous psychos (u), phantasmal figurations (u), the uncanny