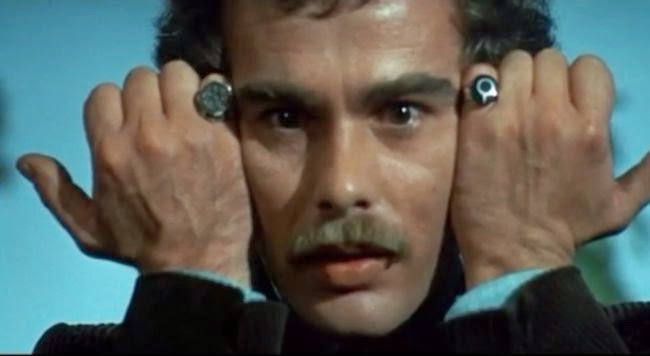 
In its era THE DUNWICH HORROR was the most faithful adaptation of a Lovecraft "Cthulhu mythos" work, and it still outstrips most of those now in existence. Aside from one problematic acting-performance, seen above, DUNWICH captures much of the appeal of the great author's themes.

To be sure, there are some major changes. H.P. Lovecraft almost never allowed any form of romance to appear in his stories, while sexuality generally manifested in displaced forms.  The prose original, though, does indirectly involve sexual congress, since it eventually comes out that the otherworldly being Yog-Sothoth has spawned not one but two entities from a human mother. So in this case it's not surprising that the script for the cinematic DUNWICH plays up the 1970's version of ilicit license, in the form of hallucinatory pagan dream-orgies.

Romance is not present in the original story, wherein a foul-seeming young man, Wilbur Whateley, seeks to get a copy of an occult tome, the Necronomicon, and is killed before he can perform any rituals, though his alien "brother" escapes to create havoc. Since a commercial film needs more audience-involvement than was necessary for Lovecraft's type of story, DUNWICH creates a young female college-student, Nancy (Sandra Dee), and has her become interested in the young, rather stone-faced Wilbur Whateley (Dean Stockwell) when he comes to her college's library on his evil-book hunt. It's a little hard to buy Nancy's fascination with Wilbur, since he displays no ingratiating charms and projects the febrile intensity of a serial killer. Perhaps director Daniel Haller and/or actor Stockwell decides that this was the best way to communicate Wilbur's disengagement from the emotions of ordinary humanity, but the approach sabotages the credibility of Nancy's behavior. It's been suggested that Nancy is under Wilbur's hypnotic control as she makes herself increasingly available to the obsessed bibliophile, but I was never convinced that she was entranced, perhaps because Sandra Dee plays the part as if she's genuinely intrigued.

Fortunately for humanity, one of Nancy's teachers is Dr. Armitage (Ed Begley).  Armitage not only prevents Wilbur from getting access to the book, he and a student named Elizabeth follow Nancy to the Whateley farm in rural Massachusetts, here they encounter Wilbur's grandfather (Sam Jaffe).  When they are unable to draw Nancy away, Armitage begins investigating the reputation of the Whateleys, and learns that Wilbur's father was lynched for attempting a demonic ritual. They also meet Wilbur's mother Lavinia, now confined to an asylum.

While Armitage is busy with research, Elizabeth trespasses on the Whateley house looking for Nancy, and finds the "brother" instead. The creature, represented as a sort of dazzling light-show that human sight cannot resolve, kills her and gets loose. In a rather strange side-plot, the grandfather is killed afterward in a fall, and Wilbur takes time out from his occult plot to attempt burying his relation in the local graveyard, inciting more antipathy from the locals.  The conflict comes to a head as Whateley almost completes a forbidden ritual in what looks like the Massachusetts version of Stonehenge, but Armitage interferes and uses his own occult knowledge to counter the ritual, dooming Wilbur and sealing Yog-Sothoth back in his own dimension. In the final coda, however, it's revealed that at some point Wilbur got the chance to impregnate Nancy, and that the Whateley line will go on.

Plot and characterization are only fair here: the real attraction are the visuals of director Haller, who made his fame providing art direction for most of Roger Corman's Poe pictures.  Unfortunately DUNWICH did not lead to greater prominence for Haller, who, like Sandra Dee, spent the rest of the 1970s in television projects. Ed Begley died shortly after DUNWICH, and of the stars only Dean Stockwell seemed to prosper in later years, though he just about ruins the film at the climax, braying "Yog-Sothoth!" at the top of his voice, when a subtler, more modulated approach might have communicated more of a creepy otherworldy resonance.
Posted by Gene Phillips at 3:45 PM
Email ThisBlogThis!Share to TwitterShare to FacebookShare to Pinterest
Labels: the marvelous