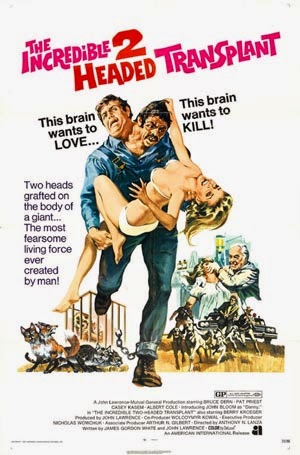 
I had not watched TWO-HEADED TRANSPLANT in twenty (maybe more) years. My only memory of that experience was that TRANSPLANT was nothing but forgettable trash.

I won't exactly say that the many years of slogging through bad movies made TRANSPLANT any better than it was. It's still pretty lackluster work. Its writers and its director, one Anthony Lanza, didn't really go the extra distance to engage with their ludicrous premise. But if one is in the "bad movie" spirit, TRANSPLANT may at least hold your interest, even without a payoff on the level of PLAN 9 FROM OUTER SPACE, or even 1970's BIGFOOT, on which Lanza worked as an assistant director.

The justification of Doctor Girard (Bruce Dern) for wanting to create two-headed creatures-- beginning with various animals, and graduating to a human being-- is no better or worse than the rationales provided by the brain-swapping flicks of the 1940s, not least the recently reviewed MONSTER AND THE GIRL.  As Girard tells his older assistant Max, the idea is to be able to graft a healthy noggin onto a body whose regular head has contracted brain cancer. Girard, surprisingly, has no special Frankenstein-like quirks, no desire to seek revenge on anyone for not realizing his genius-- though the viewer gets a little of that from Max, who was forced to quite the practice of medicine due to deterioration of his motor skills.

Others reside at Girard's rustic country house/laboratory-- his pretty blonde wife Linda (Pat Priest), the caretaker for the property, and the caretaker's adult son Danny (John Bloom), a huge hulk who became mentally damaged in a mine accident.  In keeping with the archetype of the "gentle giant," Danny has a childlike affection for Linda. Linda also receives a visit from former beau Ken (Casey Kasem). He serves little purpose beyond being available as Linda's "consolation prize" when her over-ambitious husband comes to grief, also a common motif in such 1940s flicks as THE MAD GHOUL.

At the same time Girard and Max are creating two-headed snakes, dogs, and so on, a sex-obsessed madman named Cass escapes a police dragnet.  Cass happens onto Girard's house, shoots the caretaker, ties up Girard, and abducts Linda with the intent of finding a good hideaway in order to enjoy himself.  Max comes to Linda's rescue, shooting Cass dead with a rifle.

It's also Max who puts into Girard's head the idea of taking the next experimental step.  Max argues that Danny, reduced to confused mourning by his father's death, is as good as dead, so why not try transplanting the head of the murderer to Danny's hulking form?

As easily as falling off a log, the two mostly-mad scientists create their unholy merger. In a bit of psychological parallelism that the film doesn't explore adequately, Cass's consciousness survives and dominates Danny's mind, not unlike the manner in which Max wields a subtle influence over Girard.  And soon the Two-Headed Transplant is on the loose, killing whatever victims come to hand.  The highlight of the creature's murder spree is an encounter in which Old Double-Dome has a fight with a biker, despite the latter's advantage of being mounted on his cycle and wielding a bike-chain.  This little scene makes all the sense in the world when one knows that Lanza and two of TRANSPLANT's writers collaborated on 1967's biker-flick THE GLORY STOMPERS.

I can't say that TRANSPLANT is ever anything but predictable, but since Lanza had ample experience as a film editor, the film's visuals are at least efficient.  John Bloom tries hard as Danny, but though the role isn't that demanding he just doesn't have the mojo to convey much pathos as the "weak brother" in the enhanced body. Albert Cole as Cass is just a bad over-actor, failing to convey the necessary menace that would have improved even a "so bad it's good" film. Dern, Priest and Kasem are no more than adequate, bringing nothing special to their parts.  The conclusion does include one "full-circle" moment in that the Transplant seeks to hide in the same mine where Danny was injured, but even here the pathos of Danny's fear is conjured more by the situation than Bloom's talent.  And though the "two heads" might be considered a variation on the theme of the "Jekyll and Hyde" split-personality, the two minds of the monster remain so separated that there's not much psychological interest here.

About a year later, director Lee Frost collaborated with one of TRANSPLANT's three writers on THE THING WITH TWO HEADS. It was not any subtler than its predecessor, but it showed a much better grasp of how to get some fun out of a silly idea.
Posted by Gene Phillips at 2:03 PM
Email ThisBlogThis!Share to TwitterShare to FacebookShare to Pinterest
Labels: the marvelous