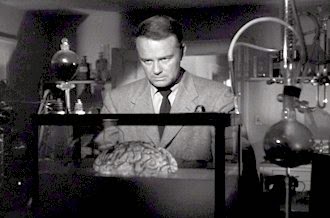 
Coincidentally, I just recently remarked on the indebtedness of THE INCREDIBLE 2-HEADED TRANSPLANT  to both the brain-transplant films of early horror and Stevenson's DR. JEKYLL AND MISTER HYDE. Now by coincidence a local channel re-showed DONOVAN'S BRAIN, one of those early brain-films-- albeit not one dealing with a transplant-- and that film's script even briefly references Jekyll and Hyde!

I've never read the original Curt Siodmak novel. Allegedly Siodmak liked none of the movie-adaptations of his work, but based on Wikipedia descriptions, this one sounds pretty close to the original. The 1953 film's direction and screenplay were both courtesy of Felix E. Feist, who does an efficient but unremarkable job with the story.  A plane crashes in the vicinity of the home of Doctor Patrick Cory and his wife Janice, and they manage to pull from the wreckage the dying body of wealthy financier W.H. Donovan. Cory, aided by his colleague Dr. Schratt, removes the brain from Donovan's body in order to study it, even though Schratt protests that this bit of "brain robbery" could land them both in jail.

Soon Cory's hubris catches up with him: the brain not only survives being removed from its body, it develops telepathic powers and begins using Cory as its catspaw. Cory begins mimicking the habits and attitude of the corrupt financier, and becomes Donovan's mouthpiece in continuing shady deals with the rich and powerful.  But the brain's control lapses occasionally, and in one of Cory's periods of clarity, he conspires with Schratt and his wife to destroy the cerebral horror.

One interesting aspect of BRAIN is that while it doesn't include a sustained discussion of the topics of God and science, it doesn't entirely take the standard mad-scientist POV that the scientist shouldn't trespass on the dictates of heaven. When Schratt initially protests that removing the brain goes against God, Cory replies that the scientist's skills are the creation of God like everything else. The big finish, in which the brain is destroyed by lightning, is surely meant to conjure with the notion of God striking down evildoers (as well as being one major difference from the novel, whose described conclusion includes no lightning). Yet the only reason "God" can take this action is because Cory reroutes his home's lightning rod so that it will electrocute the brain if all else fails.

The most interesting thing about the film is that though its story is probably distantly derived from the Stevenson classic, Cory does not suffer annihilation for his hubris, unlike both Doctor Jekyll and the majority of 1950s SF-scientists.  Cory and his wife go through a lot, but they survive unscathed, and even Schratt, after being forced to shoot himself by the brain's mental commands, lives through the ordeal.  Only a nasty blackmailing reporter is killed during the reign of Donovan's brain, and certainly the audience isn't likely to weep for him.

The film lacks the more inspired dialogue of the best 1950s SF-films, but it does have one risible line at the climax, when the brain-possessed Cory grabs hold of Janice and tells her, "Look at my brain, my dear-- your last look--!"
Posted by Gene Phillips at 2:50 PM
Email ThisBlogThis!Share to TwitterShare to FacebookShare to Pinterest
Labels: the marvelous