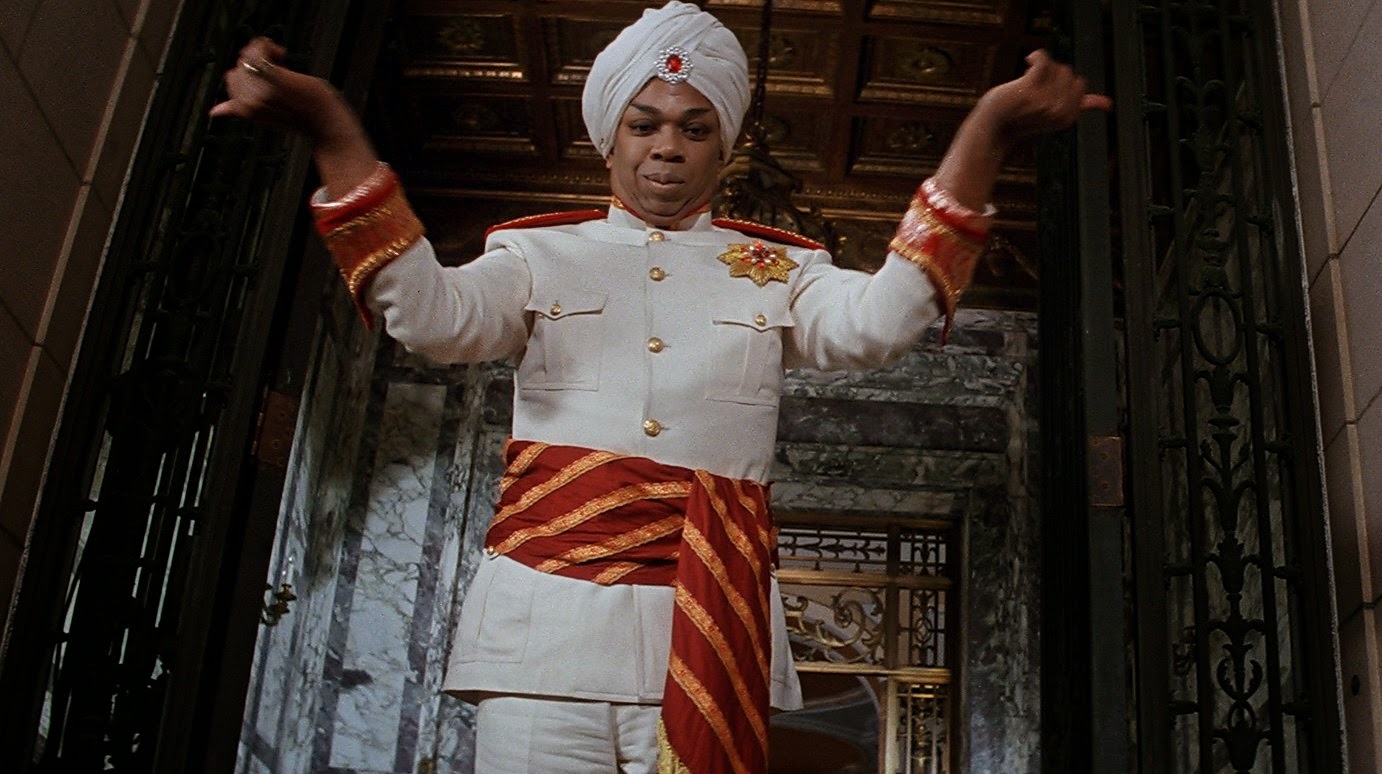 
I haven't reviewed many musicals on this blog, but the form presents a number of challenges to the NUM theory.  In contrast to more mimetically oriented narratives, musicals take a pleasure in "breaking the fourth wall." Most of these are "fallacious figments" in the naturalistic sense, meaning that audiences know that they're meant to disregard most, if not all, departures from causality. The most prominent figment is the manifestation of orchestral music to accompany the performers' songs, but there are also moments in which the protagonists briefly contravene causality, as when Fred Astaire dances on the ceiling in 1951's ROYAL WEDDING.  Yet there are also instances in which musicals include metaphenomena that are not meant to be disregarded. The cinematic dance-team of Astaire and Lucille Bremer did one of each type of metaphenomena. In ZIEGFELD FOLLIES, a dying Astaire dreams that he dances a sumptous exotic ballet with Bremer, while in YOLANDA AND THE THIEF, Astaire poses as a heavenly angel to the naive Bremer, only to encounter the Real Thing.

Except for one brief sequence, the 1982 ANNIE could be a musical in the naturalistic mode. This would be in keeping with the comic strip, which seemed to place Little Orphan Annie's exploits in a largely naturalistic, if larger than life, world. As my knowledge of the strip is spotty, I don't know if the film's attribution of magical powers to Daddy Warbucks' aide Punjab is on-target or not. But Punjab provides the only example of marvelous content in the film; that of levitating a flower-vase with his mind-powers for Annie's entertainment. Thus the film falls into the category I've termed "the marginal metaphenomenal," in that the metaphenomenality doesn't really contribute to the plot and barely adds anything to any of the characters.  Yet this doesn't seem to be a phenomenon meant to be disregarded as with my first Astaire example. There's at least a degree of logic in that Punjab, being a Hindu, may have developed mental powers through the mystic arts for which India has become famous. I tend to think that there ought to be at least a tenuous chain of logic that justifies a real metaphenomenon, even as tenuous as when a vampire and a mad scientist appear in the manor-setting of ONE MORE TIME, apparently for no better reason than the tendency of monsters to show up in such settings.

Incidentally, I don't have much to say about ANNIE as entertainment: it's tolerable on that level, but it doesn't bother to address any of the social issues relevant to the conservative Harold Gray comic strip, except in the most dismissive manner. 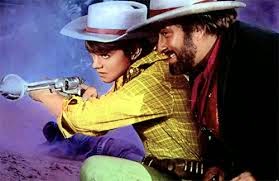 Much more negligible in the history of film musicals is the Italian western spoof LITTLE RITA OF THE WEST. It's a silly farrago of comic scenes in which the titular Rita-- played by Italian singer Rita Pavone-- goes around beating down various cowboy opponents, except when she takes time out for non-diegetical musical performances.  The script is cheerfully anachronistic, so the question comes up: should anything be taken "seriously?"  Or should everything fantastic be dismissed in the manner as ROYAL WEDDING's ceiling dance?

The particular maybe-metaphenomenon I had to consider is seen in the still above. Following a scene in which the miniscule cowgirl beats up a guy dressed like Eastwood's "Man with No Name" (and played by former *peplum* star Kirk Morris), she blows the guy away with a "golden pistol" that doubles as a grenade-launcher. Real spaghetti westerns sometimes edge into the realm of the uncanny with the use of weird weapons, but my verdict is that the only way Rita's golden pistol would have qualified would be if it had been given even a tenuous thread of logic to justify it. No such logical chain is evoked, so in essence Rita's pistol-- really no more than a verbal reference to the 1966 film, RINGO AND HIS GOLDEN PISTOL-- is no more a "real fantasy" than Astaire's ceiling-dance.

Like ANNIE, RITA is only tolerable entertainment if one happens to be in the mood for its charms. Its most amusing sequence is one in which Little Rita triumphs over a villain outfitted exactly like Franco Nero's Django.
Posted by Gene Phillips at 4:36 PM
Email ThisBlogThis!Share to TwitterShare to FacebookShare to Pinterest
Labels: delirious dreams and fallacious figments (n), the marvelous, the naturalistic, the NUM formula