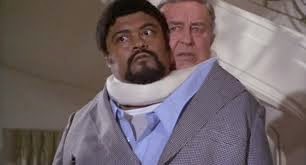 In my review of THE INCREDIBLE 2-HEADED TRANSPLANT I wrote:

About a year [after TRANSPLANT], director Lee Frost collaborated with one of TRANSPLANT's three writers on THE THING WITH TWO HEADS. It was not any subtler than its predecessor, but it showed a much better grasp of how to get some fun out of a silly idea.


I probably based this opinion on my having re-screened bits and pieces of THING WITH TWO HEADS occasionally over the years, while I hadn't seen any part of TRANSPLANT for years. But I guess I hadn't sat through THING all the way through. Now that I have, I retract the above opinion: THING isn't really much more fun than TRANSPLANT, and if anything the earlier film at least has a little more potential with its frustrated Frankenstein/Doctor Jekyll theme.

Lee Frost's film could have been fun, of course. The loony idea that, through a sequence of improbable events, a bigoted white doctor gets his head transplanted onto the body of a black man is just begging for all sorts of acidic racial humor. What image better encapsulates the idea of "the Man" as a specter that haunts Afro-American dreams and achievements?  But THING plays it too safe.

Though the opening scenes are clunky, Frost efficiently communicates the racism of dying Doctor Kirshner (Ray Milland) when he meets a new hire for the first time, Doctor Williams (Don Marshall), and finds out that he's black.  Milland does a good job portraying his character's entitled contempt-- he barely even tries to give a plausible reason for rejecting Williams. And while Marshall maintains his dignity by holding the racist doc to his contract, the actor musters an undertone of disappointment, of having his hopes of working with a prominent physican dashed by the physician's ugly animus.

However, that's the last strong dramatic moment in the movie.  Kirshner suffers an attack, and the only way his subordinates can get a new body for him is to accept that of a man on Death Row: an innocent man named Jack Moss (Rosey Grier).  Moss is holding out for evidence that will prove him innocent, only to wake up and find that his body has been hijacked by the Arch-Ofay himself.

However, unlike the two-headed monster of the previous flick, Moss and Kirshner don't go on any murderous rampage. Moss controls the body enough to break free of the doctors and run for his life.  There follows a lot of tedious chase-scenes involving cars and motorcycles, all of which dissipated whatever good will I had for the movie.

Of course, there is the film's one good line: when Moss' girlfriend sees the two-headed critter, she asks him if he has two of anything else.  It's a good line, but she says it in a distinctly unsexy setting, with Doctor Williams standing around listening.

Moss and Kirshner seesaw back and forth over control of the body a little, but the inevitable "feel good" finish comes to pass, and Moss wins free from both the long arm of the law and that unwanted second head (or third, depending on what anatomical parts one counts).

So TRANSPLANT comes off a little better than this. But my advice is, don't watch either of these; check out 1959's THE MANSTER instead.

I'll note in passing that the next completed project for both Frost and his co-scripter Wes Bishop was 1974's POLICEWOMEN, which is above-average seventies sleaze. So the two of them could successfully put their two heads together, as long as they weren't stuck in the same body.
Posted by Gene Phillips at 1:07 PM
Email ThisBlogThis!Share to TwitterShare to FacebookShare to Pinterest
Labels: the marvelous