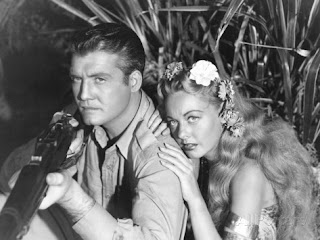 
I'll cheerfully admit that I only watched the MST3K version of this deservedly obscure jungle-flick, and that I can't imagine sitting through it without the running commentary.

In previous reviews, I've found interesting touches of myth and symbolism in various Tarzan and Bomba films. This film defies most of my efforts to do so. As the title suggests, it's another revival of the trope in which simple African savages find a beautiful blonde woman in their jungle, and proceed, for no particular reason, to install her as their tribe's goddess.

Two adventurers with the unimaginative names of Bob (Ralph Byrd) and Mike (Steve Reeves) decide to go in quest of the missing white woman, in the hope of claiming a reward. Unfortunately, a native springs out at them during their travels, and quick-draw Bob shoots him dead. The native's fellow tribesmen, the Zambeesi, corral the white guys and take them back to the village for judgment by their goddess.

As others before me have observed, it's fascinating that though Mike isn't as precipitate as Bob, neither of them is particularly moved at having killed a man. They also expect the goddess to get them off, because hey, it was the other guy's fault. White Goddess Greta (Wanda McKay) actually makes a speech about how they will be judged for murder, the same as in any other society.

But she doesn't mean it (whew); she's just buying time so that the white guys can help her escape the questionable charity of her adoptive tribe. (See, there's a witch doctor who hates her and knows she's not a goddess, so she's OK with leaving the tribe who saved her life.)

The native culture is feebly drawn, and is only an "exotic land" by virtue of their superstitious veneration of a powerless white woman. Yet if anything I'd say that the film is more unkind to women than to Africans, for all Greta can do is prattle about wanting to get back to civilization and check out the new women's hats...

ADDENDUM: I should also note that the two intrepid explorers also find radioactive material in the vicinity of the tribe's locale, which incites Bob, the uglier of the two unhandsome Americans, to betray Mike and Greta with the hope of cleaning up later-- though he gets conveniently killed off at the conclusion.

Director Lewis D. Collins directed tons of forgotten B-flicks, and today he's probably best remembered for his work in various serials, the best of which *may* be LOST CITY OF THE JUNGLE.

Despite the fact that the male leads are "Superman" and "Dick Tracy," and despite the fact that they bust knuckles on each other a couple of times, the action largely consists of the white people running away from the tribesmen and running into jungle perils-- so that it's therefore a subcombative adventure.

Posted by Gene Phillips at 2:48 PM
Email ThisBlogThis!Share to TwitterShare to FacebookShare to Pinterest
Labels: exotic lands and customs (u), subcombative adventures