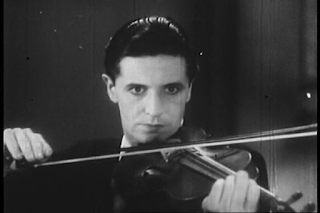 
The first remake of Alfred Hitchcock's 1927 silent film THE LODGER exists at present only in a truncated form: a 67-minute  American adumbration (complete with a more sensational title) of an 85-minute British film. Hitchcock declined the invitation to direct the production, possibly because the offer came from a less than prestigious studio, and thus directorial duties went instead to one Maurice Elvey. In contrast, the star of the silent film, Welsh-born Ivor Novello, reprised his role as the mysrerious stranger from the continent, who falls under suspicion of being a serial killer who's been killing women in London.

Like the silent film, the 1932 film diverges from the original premise of the Lowndes novel on which both works were based. Both films take place in 20th-century England, so the serial killer of the book is no longer the historical Jack the Ripper, but a murderer known as "the Avenger." In the Hitchcock film, the killer targets only blonde women, while in the Elvey film, the Avenger preys upon women that he finds talking on telephones. As I noted in my review, Hitchcock never supplies any reason for the Avenger's "blonde-mania." Since the telephone-girl angle is so deliberate-- Elvey supplies a handful of scenes showing young women laboring at switchboards-- one must suspect that some justification for this unusual fixation got left out of the American version, which is plagued with a number of sloppy cuts.

As in the earlier silent, a lodger-- this time given a specific name, that of "Angeloff"-- takes up residence at a London boarding-house, occupied by an older couple and their adult daughter Daisy. Daisy's somewhat less than charmed with her current boyfriend, a fellow named Joe, and Joe is xenophobically outraged by the presence of Angeloff once the cultivated, violin-playing continental seems to be moving in on Daisy. The 1932 version of Joe is a reporter rather than a cop, but he still functions to set up the courtly stranger as a criminal suspect.

Partly because this is a humbler production, PHANTOM FIEND does not attempt any of Hitchcock's expressionistic visuals. However, despite some of the narrative glitches Elvey delivers a reasonably lively little B-film, without the tendency toward stilted stagecraft seen in many early 1930s B-films.

A more consequential difference: Hitchcock chose to diverge from the Lowndes novel by placing all of the dramatic emphasis upon the unfairly-accused lodger, and the offscreen capture of the Avenger appears as little more than an afterthought, making it possible to clear the lodger. Someone involved in the 1932 script-- possibly Novello himself, who allegedly made script-contributions-- apparently decided that the original ending didn't provide much of a payoff, and so the story is substantially altered to involve Angeloff in the capture of the Avenger. Arguably some viewers may find this development more capricious than Hitchcock's conclusion. Yet the altered ending has one advantage" the "perilous psycho" is a real presence in the film, rather than a chimera-- and for that reason the Elvey film registers in my system as belonging to the uncanny domain.

I didn't comment on Novello's performance in the 1927 work, partly because I found it mannered and not especially effective. I've seen reviews that claim that Novello's 1932 characterization is too obviously innocent, but I disagree. In many scenes I found that Novello and Elvey suggested in Angeloff an intensity beneath his urbane demeanor; intensity that might indicate a troubled psyche-- and maybe a psycho.

Posted by Gene Phillips at 1:46 PM
Email ThisBlogThis!Share to TwitterShare to FacebookShare to Pinterest
Labels: perilous psychos (u), the uncanny