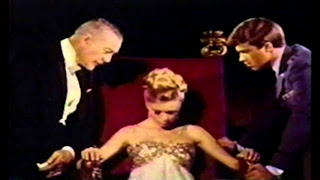 CREATURE OF DESTRUCTION is the closest its director Larry Buchanan ever came to directing a decent fantasy-film script-- but that's because said script, credited to one Enrique Touceda, is simply a reshuffling of Lou Rusoff's script for THE SHE CREATURE.

For some time I've maintained that even though this 1956 creature-feature was probably just another job to director Edward L. Cahn, the film manages to triumph over its low budget with its imaginative melodrama, involving a master hypnotist, the female subject whom he can regress back to previous lives, a skeptical psychic scientist and an exploitative impresario. Cahn, never more than a decent journeyman director, still brings a sense of excitement to the interpersonal conflicts.

Buchanan, in contrast, rarely if ever rises to the level of decent journeyman, and certainly never in the ten films that qualify for metaphenomenal status. His visual setups are tedious to the point of being mind-numbing, and whereas Ed Wood drew up a troupe of actors who were florid and extroverted, the common element in most of Buchanan's regulars seems to have been an ability to keep a straight face and not look into the camera. Even Les Tremayne, a skilled jobbing actor since 1949, can't bring much expressiveness into Buchanan's boring domain.

Whether Buchanan was working on original scripts (MARS NEEDS WOMEN being the most famous, thanks to that memorable title) or on remakes-- DESTRUCTION being one of four creature-feature retreads cranked out by Buchanan in the late 1960s-- he didn't seem to know what to do even with a good script. One can see a degree of potential in the watered-down Touceda version of SHE CREATURE, even though most of the characters have been given new names.

Basso is the name of the new film's egomaniacal hypnotist. At some point prior to the film, he senses psychic talent in Doreena, a young girl from "the gutter," and falls in love with her while using her in his demonstrations of psychic phenomena. Again there's a rival in the offing, a younger psychic researcher named Ted, who considers Basso a fraud-- and who is initially interested in the young daughter of wealthy promoter Sam Crane. The rich daughter's presence is much more negligible in the remake, and Ted's romance with Doreena is given more emphasis than the relationship of their predecessors in SHE CREATURE. The elder Crane is still the money-grubber who's in some ways more repellent than Basso.

It's a little more ambiguous this time as to whether Basso intends to use Doreena's mediumistic power to unleash a murderous monster from a past age. Still, Basso keeps unleashing the titular creature-- a low-budget "Creature from the Black Lagoon" with ping-pong-ball eyes-- on innocents, and Crane the unbeliever unconsciously abets the killings, simply viewing the murders as hype for Basso's hypnotic act.

Doreena's character is ineptly drawn, failing to project the quasi-feminist tone of the original character. Doreena seems only dimly aware that Basso's more than an overbearing mentor, and Ted is for some reason made into a captain in the Air Force (I think). None of the alterations add anything of note, and any strengths present in CREATURE OF DESTRUCTION stem purely from the earlier Rusoff script. There's one dramatic moment at the conclusion not present in SHE CREATURE. In the earlier film, the hypnotist tries to make the monster kill the romantic rival. I suspect that even this much action would proved a drain on Buchanan's budget, so instead Basso tries to shoot Ted. Doreena takes the bullet, and then Basso kills himself-- adding up to a merely depressing conclusion, whereas SHE CREATURE was sad in a tragic fashion.


Posted by Gene Phillips at 2:40 PM
Email ThisBlogThis!Share to TwitterShare to FacebookShare to Pinterest
Labels: the marvelous