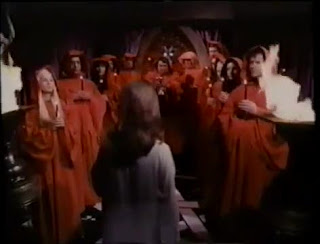 Lorimar, a production company famous for numerous TV shows and theater-films, got its start producing television films for the ABC Movie of the Week. Many of their offerings fell into the categories of thrillers and horror, and despite the company's association with the WALTONS teleseries, many fans like Lorimar best for its association with the "Golden Age of TV Movies."

In the early 1970s, Lorimar produced a fair number of well regarded horror/suspense films. However, if CONSPIRACY OF TERROR is any indication, by 1975 the bloom was off the rose.

For the most part, CONSPIRACY is constructed like a cutesy anticipation of 1979's HART TO HART teleseries, in that the story teams up a married male detective with his policewoman wife. Lead actors Michael Constantine and Barbara Rhodes, though well known in television circles for many "character roles," don't have much chemistry and the couples-badinage given them by the script is tedious in the extreme, particularly the attempt to milk the 'conflict" that Constantine's character is Jewish while Rhodes' is Gentile.

The "conspiracy" of the title is that there happens to be a Satanic cult at work right in the couple's own bailiwick. The male detective is asked to find a missing dog, and begins to gain an inkling that a lot of dogs in the neighborhood have mysteriously disappeared-- for reasons that will later become clear.

The only scene with any decent creepy atmosphere is one in which a young, traumatized-looking woman converses with Constantine about the dead dogs, but can't bring herself to reveal the awful truth. However, after this tantalizing scene, the film returns to standard mundane matters. There's little attempt to establish the nature of the Satanic cult or what their aims are, but at least they do all don snazzy red robes for the climax, as they try to exterminate a witness and run afoul of the dedicated detectives.

It's likely that this was conceived less as a horror-suspense film in its own right, and more as some sort of pilot for a series about the central characters. Happily, no such series came about.
Posted by Gene Phillips at 3:47 PM
Email ThisBlogThis!Share to TwitterShare to FacebookShare to Pinterest
Labels: the uncanny, weird families and societies (u)