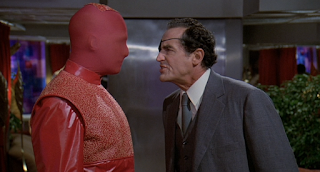 
A small biographical note: like other persons of a certain age, I've sometimes attempted to inflict the entertainments of my youth upon younger persons in my immediate family. I've often found, as I'm sure many others have, that some films and TV shows are inextricably dated and simply will not "reach" the youths of later generations.

One might think that the 1965-70 teleseries GET SMART, a broad spoof of the super-spy subgenre, might have gone over the heads of those who would never get the show's many references to the Cold War, President Johnson, and assorted snippets of ethnic humor. But for what it's worth, my experience is that at least some younger members of my family enjoyed the skillful slapstick of this baby-boomer artifact. They may have even enjoyed some of the show's halfway-suspenseful moments, which allowed for some ambivalence about the protagonists' survival, rather than constantly relying on slapstick spy-action. That said, there's no question that Max Smart remains ingrained in the public imagination primarily for the sight of a man talking into his shoe.

But often you "can't go home again," and both of the attempts to revive the quintessentially "sixties" characters and situations of the TV-show are largely painful to watch. Indeed, the only amusement value I found in both the 1980 theatrical film and the 1989 TV-movie was trying to decide which one was worse.

The two films hold one element in common: villains who have really absurd plans to conquer and/or alter the world. In NUDE BOMB, the evil clothes-designer Saint-Sauvage plans to unleash a bomb that destroys only people's clothing, while in AGAIN, there's a KAOS plot to gain control of a weather-manipulation machine, for the purpose of forcing citizens to stay indoors and-- read books? I know intellectually that these premises are not any stupider than some of the ones from the 1960s series. Yet in general the scripters for the series maintained a better faux-serious tone, and by keeping that tone consistent, the "big reveal" of yet another absurd super-weapon became funny by contrast.
BOMB and AGAIN both suffer from trying too hard every minute to convince the audience that everything is a million laughs.

NUDE BOMB, arriving in theaters about ten years after the series' conclusion, chose to downplay any connections to the previous continuity. Maxwell Smart still reports to a superior named "the Chief," necessarily played by a different actor due to the demise of the original one; however, for some reason the spy-organization's name changes from CONTROL to PITS. Smart's partner-and-wife Agent 99 is omitted entirely, and Smart is partnered with a new female aide, Agent 22, who's also the new romantic interest (as well as being over 20 years younger than lead actor Don Adams).  Smart's attempt to track down the villainous fashion-designer takes him to assorted exotic locales, and there's some attempt to spoof the James Bond theme by having Smart encounter gorgeous women-- not only the actress playing the female lead, but also Pamela Hensely, Sylvia "Emmanuelle" Kristel, and somewhat "mature" beauty Rhonda Fleming. Given the budget, some of the comical action-sequences are passable, as with a fight-scene at the Fleming-character's chalet involving Adams, Gemser and some KAOS men. On the minus side, Smart's investigations also involve a tedious shootout in a Universal theme park that screams the message: "We the producers are dumping in product placement here, and don't care if you like it or not."

The jokes are generally flat and forced, but I'll give this spiritless production one minor compliment: at least it works as a Bond-spoof insofar as it gives the audience a quantity of action and hot women, much like a similarly dumb spoof, 1967's CASINO ROYALE 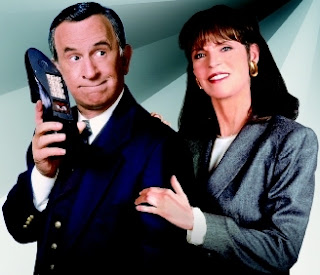 Nine years later, the franchise got another tryout, but this time, the producers decided to play the nostaglia-angle for all it was worth, bringing back many of the actors from the teleseries in their original roles. The most noteworthy of these was Barbara Feldon as Agent 99, who's once more married to Smart as she was at series-end, and there's even a quick continuity-reference to the twin sons seen therein, who are said to be "off at college." CONTROL has been dissolved and its functions taken over by newer agencies, who bring Agent 86 out of mothballs to track down a missing scientist (who bears the hilariously ethnic name "Hottentot)". In the course of his investigations Smart re-activates not only his old partner 99-- who's involved in a book-deal that turns out to be of great consequence to the plot-- but also Hymie the Robot and second-banana spy Larrabee (who admittedly had made an appearance in NUDE BOMB). In addition, Smart is once again pitted against his old series-nemesis Siegfried, though the villain himself is downplayed in favor of introducing his never-seen-before twin brother, who's not nearly as charismatic as the original comic-villain.

As for the jokes-- well, this time they're not just flat and forced, but they're covered with the dust of nostalgia, for almost every joke in GET SMART AGAIN is a swipe from the old series. The humor is also almost entirely verbal. The one half-decent attempt at aping the teleseries' penchant for slapstick takes place between Smart and a KAOS-agent, whose fight is continually interrupted by file-drawers that keep popping out and hitting both combatants.

I don't know what kind of budget this TV-film had, but frankly, most of the time the show reminded me of those old 1960s stag-films, shot in warehouses and apartments. Director Gary Nelson was a seasoned if not particularly outstanding TV-director by this time, so I tend to blame the drab, cloistered look of the telefilm on a miniscule budget-- though the lameness of the plot involving 99's tell-all book certainly does not help.

My verdict is that though both films are terrible, the earlier one is better if you want something that at least resembles a Bond-spoof, while the later one may work for anyone who simply wants to re-visit all the old schticks of the series-- though I for one would rather just watch the old show instead.

Posted by Gene Phillips at 3:39 PM
Email ThisBlogThis!Share to TwitterShare to FacebookShare to Pinterest
Labels: combative comedies, the marvelous