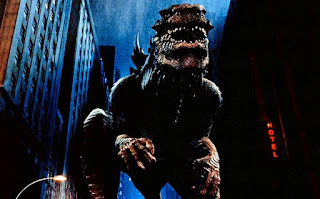 
Back when GODZILLA '98 first appeared, I'm sure I threw as many stones as anyone else at the Americanized remake. My complaints were voiced by many: the derivative nature of the script, borrowing heavily from ALIENS and JURASSIC PARK, and the producers' bizarre attempt to divert any "atomic age guilt" from the culture of the American audience to, of all people, the French.

Yet, upon revisiting the 1998 film, I found that although the movie-makers didn't comprehend any of the factors that made the original Japanese film, or even its Americanized version, so memorable, producers Devlin and Emmerich at least turned out a tolerable big-budget blockbuster. Like JURASSIC PARK, GODZILLA '98 wasn't much more than a series of chase-scenes, sometimes with the big atomic lizard-mutant as the chaser, and sometimes as the chase-ee. But where I didn't find any of the JURASSIC characters interesting, much less those in Devlin and Emmerich's 1994 STARGATE, I found that I did rather like the viewpoint character of the 1998 film, Nick Tatoupolous (Matthew Broderick). Maybe it was the character's indefatigable devotion to the minutiae of lizard-biology that did it, for certainly Nick's no deeper than a similar "nerdy everyman" in STARGATE.

Many critics, not least the Japanese owners of the Godzilla franchise, took exception to the fact that this Godzilla was just a big lizard rather than the embodiment of nuclear apocalpyse. Certainly this Godzilla is not capable of wading through American defenses with the near-invulnerability of the 1954 monster. If anything this "radioactive iguana," as one critic called it, may remind one more of the titular creature from the film that allegedly inspired GOJIRA: 1953's THE BEAST FROM 20,000 FATHOMS.  In my review of that film I wrote:


The Beast's disease-bearing blood is introduced to keep the army from blowing the monster to bits at the earliest opportunity, and though this development presents a valid enough problem in the suspense department, the contrivance takes away from the Beast's formidability.


To be sure, Devlin and Emmerich don't resort to giving Godzilla some "X-factor" that protects him from harm, However, they do have Godzilla frequently fleeing U.S. forces down the deserted corridors of New York's streeets, and though on occasion the Big G turns and takes out some of his pursuers, the emphasis is upon the big critter's need to flee the superior firepower of the military, sometimes even burrowing down into the subways to escape persecution. In addition, Godzilla's more lingering threat, conspicuously swiped from ALIENS, is that the bisexual dino has laid dozens of eggs, which can and do spawn a bunch of little raptor-type Godzillas.

Though there's a lot of violence in GODZILLA, my re-screening suggested that it was of a "diffuse" rather than a "centric" type. Like the Fathom-Beast, Godzilla's eventual destruction is not seriously in doubt, and there's no sense, as in the 1933 KING KONG, that the big monster is engaged in a ritual combat with the forces of humankind-- so that I judge the film to be a subcombative type.

Posted by Gene Phillips at 3:20 PM
Email ThisBlogThis!Share to TwitterShare to FacebookShare to Pinterest
Labels: the marvelous