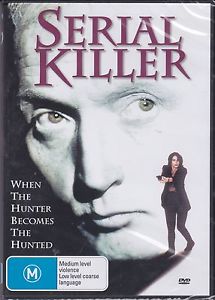 Though this video-film is strictly "HANNIBAL-lite," it's worth seeing for a couple of things.

One is the smooth performance of actor Tobin Bell playing Morrano, the killer of the title. In some ways Morrano seems more derivative of Norman Bates than Hannibal Lecter: we learn that's he's a taxidermist, was mistreated by his mother, and later killed her before taking up the career of manic murderer. However, the storyline is clearly swiped from SILENCE OF THE LAMBS, though there's never an avuncular relationship comparable to the one between Lecter and Clarice Starling. However, the silver-tongued Morrano does target a female FBI profiler who is able to expose him thanks to her ability to imagine his criminal mentality. Morrano has a god-complex, and his solution to the knowledge that he will someday die is to pressure profiler Selby (Kim Delaney) into bearing his child.

Neither the characters of Selby or her FBI-boyfriend Cole give the actors much to work with, and clearly Morrano is meant to be the star of the show. He quotes Shakespeare, charms women despite having an unassuming appearance, and seems to melt through the FBI's hands whenever he chooses. He hints that Selby is somehow implicated in his evil because she can understand him, but this plot-possibility is, to say the least, not examined with any of the panache that author Thomas Harris bestowed upon Starling.

There was one minor surprise in the script, though, Early in the film, after Morrano is first captured through Selby's efforts, he's quixotically inducted into a medical program for some special project-- which of course, allows him to escape. While watching this sequence, it looks mostly like a typical action-movie jab at them pointy-headed intellectuals that won't let manly men destroy verminous scum. But surprise: the medical experiment is referenced at the film's very end, in a fairly clever manner, so as to upset the smooth-talking serial killer's applecart. However, I must admit that without Tobin Bell's performance, this wouldn't be enough to recommend the film even slightly.

On a minor note, Pam Grier appears in the cast in one of her many throwaway supporting-roles typical of this period.
Posted by Gene Phillips at 3:42 PM
Email ThisBlogThis!Share to TwitterShare to FacebookShare to Pinterest
Labels: perilous psychos (u), the uncanny