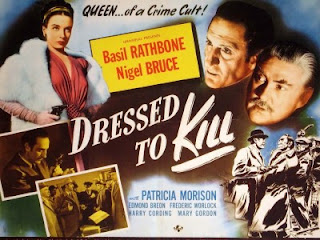 
Within a week two broadcast television channels showed what may be actress Patricia Morison's best known roles, at least to genre specailists: as the "queen of a crime cult" in DRESSED TO KILL and as the nurse to a doctor suspected of murder in CALLING DOCTOR DEATH.

Though Morison won acclaim on stage for her acting and singing talents, in Hollywood films she was largely relegated to B-films. She projected a stunning, perhaps somewhat icy demeanor in the roles here, and while she was probably capable of more, this "ice queen" image determined much of her film-career.

DRESSED TO KILL is the last of Universal's Sherlock Holmes films, and although it's an entertaining entry, the franchise was showing a few signs of age, in particular because DRESSED recycles elements of Doyle's "Six Napoleons," which elements had just been used two years ago, for the far superior PEARL OF DEATH. In addition, there wasn't much novelty left as far as pitting the Great Detective against a foe of the opposite sex, given that Sherlock had tilted with the Spider Woman in 1944 and the Woman in Green in 1945.

Unfortunately, Morison's villainess, saddled with the unmemorable name of Mrs. Hilda Courtney, seems something of a disappointment in the realm of the original villains crafted by Universal's scripters. Whereas "Six Napoleons" concerned a crook committing robberies in order to find a single precious "macguffin," Courtney's gang is seeking three items, which when put together will reveal the location of valuable money-printing plates. As in PEARL OF DEATH, the female member of the gang uses feminine persuasion to acquire her targets, and, failing that, there's a big guy to handle the rough stuff. The most interesting thing about Courtney's gang is that both she and her main aide, Colonel Cavanaugh, seem to be completely upper-class crooks, whereas in PEARL and others, there's usually the expectation that the henchmen will be culled from the lower strata.

Holmes' deductive skills at unraveling the nature of the macguffin are given more emphasis than physical peril, though the crooks do commit one "bizarre crime" in their method of trying to execute Holmes: however, the film registers entirely in the naturalistic domain. Perhaps the most interesting scene in the film is the opening, in which Holmes and Watson reflect back on their encounter with Irene Adler of Doyle's "A Scandal in Bohemia." While no direct parallels are drawn between Mrs. Courtney and the only female who outsmarted the Literary Holmes, I suspect that the script wanted the audience to draw such parallels. Mrs. Courtney is a decent Holmes-foe, but even rated against other Universal originals, she's no better than average. 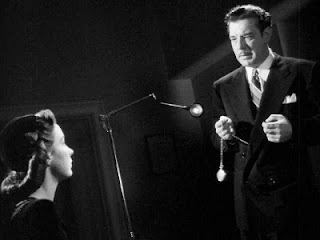 As DRESSED TO KILL ended a Universal series, CALLING DR. DEATH began one: the six films known as the "Inner Sanctum" series, all of which starred Lon Chaney Jr. Some were heavier on horror-themed elements than others, and I would judge DEATH as somewhere in the middle, purely because of the use of hypnosis.

I've no experience of the Inner Sanctum radio series on which this and other films in the series were based, but whatever the debt to the radio shows, the films are basically indistinguishable from most of the other mystery-thrillers produced by Universal.

DEATH presents that old stand-by: the husband tormented by his wife's infidelities, called to account when she's murdered. Chaney is Dr. Mark Steele, a neurologist who treats his patients with hypnosis, and who is attended by his loyal nurse Stella (Morison). Though the screenplay is fairly decorous about presenting the infidelities of Mrs. Steele (Ramsay Ames), Dr. Steele is tormented by the knowledge that she's become his wife only in name. However, both of them emerge as fairly flat characters, with little or no psychological reasons given for their growing apart. Mrs. Steele is painted as a one-dimensional money-grubber: she won't give the doctor a divorce because she likes the status of being a wealthy doctor's wife-- and yet, one wonders why she's so open with her affairs, which could make it very easy for the doctor to get evidence against her and to divorce his wife without her consent. While the intent was to make Dr. Steele sympathetic, he comes off as something of a nervous milquetoast-- possibly to make audiences wonder the physician he had a "Mister Hyde" persona that committed the wife's murder.

While the script does throw in one possible red herring-- a woman in a wheelchair, who might have had a reason to kill Mrs. Steele-- there's never really much likelihood that "Doctor Death" is the real culprit, leaving only-- yes, icy nurse Stella. Having learned hypnotism from the doctor, she's used it to commit her own "bizarre crime," killing the wife so that she can have the doctor for herself, and allowing an innocent man to be convicted of the crime. As seen in the still above, Steele himself then turns the tables, using his hypnotic talents to make Stella reveal the truth.

Chaney's performance, complete with tormented voice-over, is only fair, while Morison projects a glacial sensuality. J. Carroll Naish makes the most of his scenes as a detective who hounds Steele throughout the investigation, but who suspects the truth-- though he plays things pretty close to the vest, choosing to stage the Big Reveal for the exact same day that the innocent man is supposed to walk the last mile.

I'll note that only the use of hypnotism as part of a murder-plot gives it an uncanny status, whereas as the functional hypnotism used by Steele in his treatments, and in his exposure of Stella, remains naturalistic.
Posted by Gene Phillips at 4:14 PM
Email ThisBlogThis!Share to TwitterShare to FacebookShare to Pinterest
Labels: bizarre crimes and crimefighting (n), enthralling hypnotism and illusionism (u), the naturalistic, the uncanny