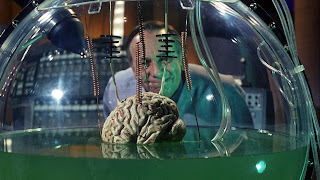 The gimmick-oriented types of horror and science fiction represented by PROJECT X had become woefully outdated by the time the film made it to theaters-- and this despite the fact that the film, produced and directed by Castle (though written by a fellow who was largely a TV-series scribe), had been adapted from a pair of contemporaneous L.P. Davies SF-novels.

The best way to explain this is that neither the Davies novels (which I've not read) nor PROJECT X were on the cutting-edge of horror and SF. At heart, PROJECT X is a conventional spy-story set in 2118, "three generations" from the present, though the ambience is still much like that of the late 1960s. Even Castle, who had long specialized in hyping his productions with the use of ballyhoo publicity-gimmicks, couldn't come up with much more for this cheap, TV-style film than to attempt a few animation sequences that he would try to pass off as "depictography."

I don't recall anyone in the film actually using the term "Project X," though I must assume that it applies to main character Hagen Arnold (Christopher George). Arnold inhabits an America that has appears to have been turned into a technological paradise through government supervision and control of private industry-- yet for some reason, the country's main adversary remains that Old Debbil Communist China, adroitly renamed "Sino-Asia." Though Arnold is only a geneticist with a side-interest in the history of 1960s America, the U.S. military convinces him-- several days prior to the beginning of the narrative-- to become an espionage operative, using his credits to uncover the Asians' diabolical plans against the U.S. The film begins in media res, with the military authorities bringing Arnold to their scientists for treatment. It seems that both Arnold and his spy-contact in Sino-Asia disappeared, and that Arnold subsequently turned up back in America. However, the military can't question Arnold, for prior to his mission he was given a memory-wiping drug so that he could not talk about his mission to the Asians-- and he's apparently taken it, for he remembers nothing about what happened to him in Asia, nor anything about who he is. The American scientists, led by Doctor Crowther, are given the task of restoring Arnold's memory despite the effects of the drug they themselves created.

Crowther devises a possible way to make "Project X" remember his past: knowing that Arnold should still have subconscious memories of his studies of 1960s American history, the scientist arranges a psycho-drama to make Arnold believe that he's alive in the 1960s. In this scenario-- acted out by government operatives on specially constructed sets-- Arnold is imagined as a bank-robber, on the run from the cops and holing up on a small farm.

Possibly this idea of giving Arnold a false identity made more sense in one of the Davies novels, but seems entirely counter-intuitive in the film. What does work, however, is that by chance Arnold wanders away from his handlers and encounters Karen, a typical young woman of 2118 who has no idea she's interrupted a government project. In addition, a new player enters the game: Galleia, the aforementioned spy-contact who disappeared in Sino-Asia. Though Karen and Galleia are not precisely working together, their joint influence does what the government's scheme can't come close to accomplishing: breaking through Arnold's amnesiac haze.

Like a lesser TV-movie, PROJECT X is long on involved incidents and short on meaningful plot, and the script constantly resorts to lots of scenes of men talking-- mostly the army guys and the scientists-- about what they need to do and how they'll do it. Arnold himself is a pretty passive "hero," who barely does much of anything except wander from place to place. The stress of his memory's return gives him one moment of "action," in that he temporarily obtains enough psychic power to blast one of his enemies-- but after this happens, the psychic angle is dropped, and Castle may have only included it to give the slow-moving narrative a little pizzazz. Karen (Greta Baldwin) fares a little better in terms of narrative movement, as she seeks to figure out why this handsome stranger thinks he's a man out of the 1960s, and she actually gets a few moments of drama, defying the military and some of her superiors at her workplace. (She works for what sounds like a farm using milk-products, called-- as I heard it-- a "kinery," which I suppose is like a winery, but for the products of "kine," a.k.a. "cows.)

Since the thrills are few, the characters are flat, and the mystery less than enthralling, the most interesting elements of PROJECT X are its cultural aspects, particularly in depicting the relationship of the U.S, of 2118 and Sino-Asia. Among the endless talking-head scenes, it's revealed that both governments have for some time been seeking to control genetics so that they can breed as many male babies as possible, presumably for the purpose of having endless supplies of soldiers. There's a twofold irony to this ambition-- one being that the possession of more males is seen as a way to make the nations stronger, and the other being that today real-world China is overpopulated with men who can't find native brides, thanks to a practice that doesn't require genetic manipulation: female infanticide, for the purpose of keeping one's family line "on top" as it were. For much of the film, the authorities think that Sino-Asia has solved this genetic problem, but as it turns out-- and this doesn't deserve a full spoiler-- the real threat has to do with the unleashing of new strains of plague. It's interesting to wonder whether or not the authors were aware of a tradition, hearkening back to the ancient Greeks, that linked the idea of "the mysterious Orient" to fears of disease and pollution. Without specifying the nature of the threat, it will come as no surprise that the evil Asians do not triumph.

The sociological myths here, though, don't work very well without decent characters to convey them. Castle would have considerably more success in combining character conflict and science fiction catastrophe in 1975's BUG, his last-produced theatrical film.