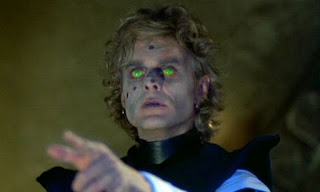 Because the first GHOULIES and the first GREMLINS were in production at the same time, no outsider can be certain as to whether director/co-writer Luca Bercovici’s low-budget horror-film was meant to bite the style of the big Warner Brothers production. Warners lost a court case against the GHOULIES franchise, paving the way for three more low-budget entries in the series. Nevertheless, while it’s possible that Bercovici may have utlitized diminutive demons because he was aware of the GREMLINS project, the plot of the initial GHOULIES outing resembles the Warners project far less than the plot of H.P. Lovecraft’s “Case of Charles Dexter Ward.”

In point of fact, none of the gross little creatures in the first film—either the actual fetal-looking monsters called “Ghoulies,” or a pair of benign magical dwarves—are the center of the story’s action. That center is none other than sorcerer Malcolm Graves, first seen about twenty years before the main action of the narrative. Graves intends to make a ritual sacrifice of his infant son Jonathan to gain Satanic power. The boy’s mother sabotages the ritual, so that Malcolm can’t kill Jonathan as planned. However, the far-sighted sorcerer has a henchman spirit the child away. Jonathan is raised to manhood without knowing anything about his true parentage, and apparently Malcolm passes away naturally before he has the chance to perform the sacrificial ritual again. However, Malcolm’s death sets plot-wheels in motion. The grown Jonathan and his girlfriend Rebecca are informed that Jonathan has received the bequest of Malcolm’s mansion, so the two of them take possession with an eye toward leaning more about Jonathan’s heritage.

Unsurprisingly, Malcolm’s spirit is still hanging about, and over time he usurps Jonathan’s personality, causing the young man to dabble in the occult. To make matters worse, the two young people hold a party for their friends at the mansion, which results in many young people meeting unremarkable deaths at the hands of the Ghoulies or other demons—all so that Malcolm can take permanent possession of his son’s body (and maybe his girlfriend too). The story culminates in a magical battle between father and son, but though Malcolm is defeated, he, not the Ghoulies, provides the narrative’s motive force—whereas the focal characters of the sequels—none directed by Bercovicci—are more about the Ghoulies themselves. 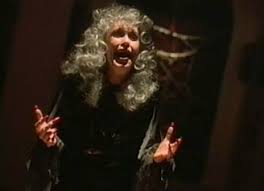 GHOULIES will probably be the directorial work for which Bercovici will best be remembered, but his actual best work came almost ten years later-- and ironically, in THE GRANNY, the writer-director really does lift a page from the GREMLINS idea.

In yet another short prologue, a young woman, apparently demon-possessed, first tantalizes and then kills her own father. A stranger with the “spell-it-backward” name of “Namon Ami” shows up, and claims that the girl’s not possessed; she just made improper use of the curative potion he gave her. He exposed her to sunlight and she dissolves like a vampire.

Cut to modern times, and the mansion of Anastacia “Granny” Gargoli (Stella Stevens), who sits around moaning about her age and her lost beauty. Her constant companion is Kelly, the illegitimate daughter of one of Granny’s rotten grown children. Kelly, despite being played by knockout Shannon Whirry, is a shy and retiring type, the better to contrast her with the lousy relatives. All of them seem like refugees from an Andy Milligan film festival—two brothers who want to see Granny die to inherit her wealth (and who plot to poison her), a niece who makes up to her uncle, and a nephew who challenges Granny to a wrestling-match.

But before the nasty brothers can commit matricide, Namon Ami shows up. He gives Granny his special potion, giving her explicit instructions about how NOT to take it. Of course Granny ignores the injunctions and does what she pleases. As a result Granny dies and comes back as a sort of zombie-witch, dealing out comical deaths to her rotten offspring, replete with many Freddy Kruger-isms.

In contrast to the “Nightmare on Elm Street” films, THE GRANNY is about nothing except horrific gags, so in essence this is a more explicit comedy-horror than GHOULIES. Stella Stevens, never known as a subtle performer, apparently has a high old time wreaking havoc with one-liners, and the deaths have a perverse edge that puts them above run-of-the-mill films of this type. For her part Kelly has to abandon her shyness just to survive, and proves to be, rather improbably, a tough-ass fighter, taking on both the nasty niece and her grotesque grandmother.

There’s a suggestion of a sequel, but it’s just as well that THE GRANNY never spawned a franchise. It’s definitely one of a kind.