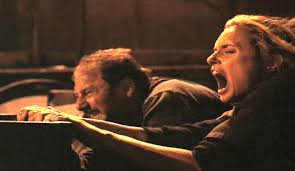 I’m not sure there are enough “space-prison” movies out there to constitute a subgenre, but I tend to think that LOCKOUT is probably at the top of that small heap. TIMELOCK, while mindlessly diverting, might be possibly rank somewhere in the middle.

Far in some standard galactic-empire future, Jessie Teegs (Maryam d’Abo) pilots a cargo ship, and one of her tasks is to transport prisoners to the various satellite-jails, the worst of which is the automated facility Alpha Four. Among the all-male jailbait in the cargo hold are many mean muthas, the worst of which is kickboxing mastermind McMasters (Jeff Speakman)—and one "weak sister." Riley (Arye Gross) is a petty thief mistakenly assigned to the maximum security lockup—and since he has little in common with the (somewhat homoerotic) bad boys, the thief ends up being the only ally of the righteous lady pilot. The jailbirds break free and try to take possession of Teegs’ ship, but she absconds with a data card they need to fly the ship.

There’s no plot to speak of, just a lot of running around and intermittent fighting, until the mean boys are eventually defeated. Both the action-scenes and the badinage between Riley and Teegs are tolerable but unexceptional, and TIMELOCK’s sole sociological point of interest is that it also belongs to a slightly larger heap of films featuring a “tough girl-weak guy” teamup.

Posted by Gene Phillips at 1:40 PM
Email ThisBlogThis!Share to TwitterShare to FacebookShare to Pinterest
Labels: combative adventures, the marvelous