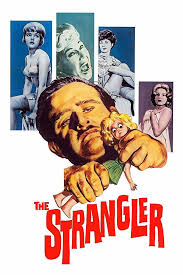 At this late date it’s hard to say how versed Bill Ballinger, the screenwriter of THE STRANGLER, was in the still-ongoing case of the Boston Strangler. Though an early specialist—what we now call a “profiler”—theorized that the erratic serial killer might have mother issues, I don’t have any idea if that theory was available to Ballinger. For all I know, the writer may have chosen to model the fictional character of Leo Kroll less on theories about Boston’s serial murderer and more upon the template of Hitchcock’s Norman Bates, who in turn had been partially patterned after Ed Gein.

In PSYCHO, the audience never knows anything more about Norman’s mother than what Norman relates. THE STRANGLER is more explicit: the script and direction efficiently lay out exactly how badly Kroll (Victor Buono) had been dominated by his invalid mother (Ellen Corby). Her ongoing illnesses made it impossible for Kroll to sustain enough capital to go to medical school, and so Kroll holds down a menial job as a chemical researcher. In order to more surely bind her son to her, the demanding Mrs. Kroll has repeatedly disparaged her obese son’s appearance, implying that no woman could ever want him—and though she claims to love him, there’s no sense that she has ever tried to offer her son sensuous inducements to remain tied to her apron strings, as one sees in certain iterations of Norman’s mother. Kroll becomes a serial murderer of women for the same basic reason as Norman does: frustrated sexuality. But whereas Norman assumes his mother’s persona in an attempt to convince himself that she’s jealous of Norman’s attentions, Kroll has no illusions of becoming someone else. He can’t quite assert himself into strangling his mother, but he can murder various nurses in the city of his residence, as images of the manipulative crone. But he evidently also sees his victims as emblems of feminine allure, for before committing murder he patronizes a shooting gallery and always wins a cute little doll for a prize. The script is a little vague on what he does with the dolls—he only leaves one at the scene of a strangling, thus giving the local cops a clue to his true nature. At the same time that he’s killing so promiscuously, though, he has one ideal real-
world woman he wants to court, Tally, the young girl who manages the shooting gallery.

Ballinger’s script devotes scant development to Tally, to Kroll’s other victims, or to the cops who eventually track Kroll down. Te anatomy of this particular psycho is the film’s only selling point. Unlike a handful of other films based on the Boston Strangler, this one creates an uncanny sense of the fearsome killer, rather than reducing him to a predictable psychological “type.” Kroll’s doll-fetish is the only aspect of his killings that gives them the vibe of the uncanny “bizarre crime,” but Ballinger skillfully relates the doll-motif to the killer’s unrealistic idealization of women. The film’s only real surprise comes at the end, for though it sets up the viewer to believe that the innocent Tally will be spared. The cops, having ferreted out Kroll, want Tally to be a stalking-horse, assuring her of their protection. Tally refuses, forcing the cops to surveil her from a distance—which makes it possible for Kroll to break in and strangle her before the cops can burst in and shoot him down for a somewhat satisfying resolution.

Oddly, in real life Albert de Salvo was jailed the same year that THE STRANGLER saw release, and though he went to prison the law did not in his lifetime validate his identity as the Boston Strangler. 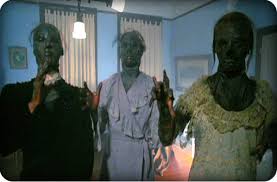 DON’T GO IN THE HOUSE was released one year after the mammoth success of John Carpenter’s HALLOWEEN, but HOUSE doesn’t resemble the majority of so-called slashers. It also declines to create any mystery about the identity of the psycho-killer, and in this resembles not PSYCHO but one of its same-year competitors, Michael Powell’s PEEPING TOM. However, Donnie Kohler of HOUSE is one of the most depressingly downscale psychos in American film.

Like Norman Bates and Leo Kroll, Kohler is unable to forget his early abuse, recapitulating it in his profession as a worker in a waste-disposal plant. In his childhood his termagant mother—whose husband apparently left her—picked up the habit of punishing young Donny’s sins by holding his arms over a stove-fire. There’s not much detail on the mother, but the broad implication is that she took out her anger toward her absent husband on her child, not unlike the mother of Stephen King’s Carrie White.


Unlike Carrie, apparently Donnie manages to conceal his psychosis from the waking world and gives the impression of being a functioning adult—aside from one incident at his workplace, where he watches in fascination when another worker’s body catches on fire. This apparently tips Donnie over the edge, for in a scattershot manner he begins looking for women to kill. Like Leo Kroll, Donnie’s not any sort of charmer, so he has to rely on trickery and brute abduction, as he decides to exorcise his sexual feelings by setting women on fire—clearly an act of revenge against his deceased mother.

The film recounts Donnie’s crimes in a documentary-like manner, showing the big city as a place of low-income grit and grime. Like the psycho in PEEPING TOM, Donnie retains some awareness of his hideous acts, and even attempts to confess to a Catholic priest (possibly a symbol of the absent father). This aspect of the killer’s personality keeps his world within the context of the drama, in contrast to PSYCHO’s universe of irredeemable irony. There are no clever cops tracking down the killer this time: Donnie accidentally exposes himself and brings about his own doom.

The “delirious dreams” trope appears at the film’s end, when Donnie hallucinates that some of the dead people in his life resurrect themselves to haunt him prior to his death. The film’s darkest touch appears in a coda, showing another little boy becoming warped into psychosis by a heavy-handed mother—and thus suggesting that the horrors of this house will go on, world without end.

Posted by Gene Phillips at 1:24 PM
Email ThisBlogThis!Share to TwitterShare to FacebookShare to Pinterest
Labels: delirious dreams and fallacious figments (u), perilous psychos (u), the uncanny